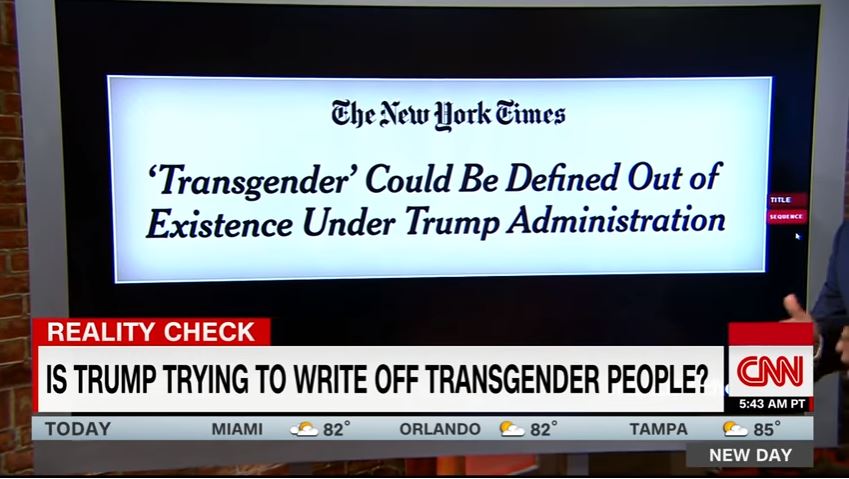 A scoop in the lead slot of Monday’s New York Times was horrified that the Trump administration may resume following scientific procedure by defining sex in biological terms based on one’s genitalia at birth -- or, as the Times insisted, defining transgenders “out of existence”: “Trump May Limit How Government Defines One’s Sex – Gender Listed At Birth – Threat to the Protections of Those Who Identify as Transgender.”

The text box was dramatic: “Negating federal recognition of 1.4 million transgender Americans.” The online headline was even more hyperbolic and misleading: “‘Transgender’ Could Be Defined Out of Existence Under Trump Administration.”

The Trump administration is considering narrowly defining gender as a biological, immutable condition determined by genitalia at birth, the most drastic move yet in a governmentwide effort to roll back recognition and protections of transgender people under federal civil rights law.

A series of decisions by the Obama administration loosened the legal concept of gender in federal programs, including in education and health care, recognizing gender largely as an individual’s choice and not determined by the sex assigned at birth. The policy prompted fights over bathrooms, dormitories, single-sex programs and other arenas where gender was once seen as a simple concept. Conservatives, especially evangelical Christians, were incensed.

Now the Department of Health and Human Services is spearheading an effort to establish a legal definition of sex under Title IX, the federal civil rights law that bans gender discrimination in education programs that receive government financial assistance, according to a memo obtained by The New York Times.

The new definition would essentially eradicate federal recognition of the estimated 1.4 million Americans who have opted to recognize themselves -- surgically or otherwise -- as a gender other than the one they were born into.

“This takes a position that what the medical community understands about their patients -- what people understand about themselves -- is irrelevant because the government disagrees,” said Catherine E. Lhamon, who led the Education Department’s Office for Civil Rights in the Obama administration and helped write transgender guidance that is being undone.

The move would be the most significant of a series of maneuvers, large and small, to exclude the population from civil rights protections and roll back the Obama administration’s more fluid recognition of gender identity. The Trump administration has sought to bar transgender people from serving in the military and has legally challenged civil rights protections for the group embedded in the nation’s health care law.

Several agencies have withdrawn Obama-era policies that recognized gender identity in schools, prisons and homeless shelters. The administration even tried to remove questions about gender identity from a 2020 census survey and a national survey of elderly citizens.

While Trump official Roger Severino was labeled “among the conservatives who blanched at the Obama administration’s expansion of sex to include gender identity,” none of the transgender supporters got a liberal label, but were instead “civil rights” advocates.

Civil rights groups have been meeting with federal officials in recent weeks to argue against the proposed definition....

But Attorney General Jeff Sessions’s previous decisions on transgender protections have given civil rights advocates little hope that the department will prevent the new definition from being enforced. The proposal appears consistent with the position he took in an October 2017 memo sent to agencies clarifying that the civil rights law that prohibits job discrimination does not cover “gender identity, per se.”

But in recent discussions with the administration, civil rights groups, including Lambda Legal, have pointed to other court cases. In a legal memo presented to the administration, a coalition of civil rights groups wrote, “The overwhelming majority of courts to address the question since the most relevant Supreme Court precedent in 1998 have held that antitransgender bias constitutes sex discrimination under federal laws like Title IX.”

The story concluded as it began, in emotional, non-journalistic, full-on panic mode.

Ms. Lhamon of the Obama Education Department said the proposed definition “quite simply negates the humanity of people.”

Whoa, a WOW story -- the Trump Admin has a new definition of sex that would render 1.4 million transgendered people legally nonexistent: sex is "a person’s status as male or female based on immutable biological traits identifiable by or before birth.”