NYT Down to GA to Document Downfall of ‘Fire-Breathing Conservatives' 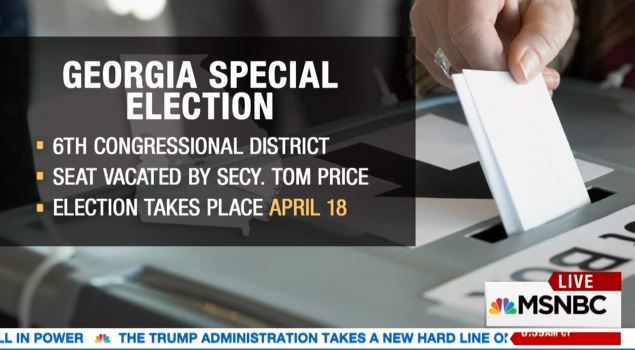 The New York Times has already made several pilgrimages down to Georgia to flatter Democratic candidate Jon Ossoff, who may take a House seat for the Democrats in a special election to replace Republican Tom Price, who joined President Trump’s cabinet. Political reporter Jonathan Martin made Monday’s front page with yet another one, this one focusing on GOP disarray: “For the G.O.P., A  House Race Blurs Identity.” The online headline was more direct: “As Georgia Vote Nears, G.O.P. Asks if Ideological Purity Matters Anymore.”

Next to an odd, unflattering photo of two sad-sack looking Republican candidates at a debate, Martin sketched a Republican Party identity crisis.

When Michael Fitzgerald, a local Republican leader, took a break from packing up the signs after a candidate forum here last week, he appeared momentarily flummoxed about the state of his party under President Trump.

Early voting has already begun in a closely watched special House election to replace former Representative Tom Price, who became Mr. Trump’s health secretary, but in the suburbs north of Atlanta, few seem quite sure what exactly the party stands for now.

Mr. Trump’s takeover of the Republican Party has blurred the bright-line ideological distinctions that defined the right for the past eight years. Driven more by personal loyalty and a ravenous appetite to win than by any fixed political philosophy, the deal-cutting president has been received warmly by some mainstream conservatives. At the same time, even ideological hard-liners who share the president’s pugilism but not his pragmatism have stuck by him because Mr. Trump has made the right enemies -- and gleefully ridiculed them with public insults rarely heard from a president.

These loyalties have upended the Tea Party-versus-establishment divide, which has dominated fratricidal primary seasons since 2010 but increasingly has the air of fins on the back of a car, a quaint relic from an earlier era. With Mr. Trump in charge, the political market for purity on the right has been devalued.

The special election on April 18 has drawn substantial attention because one of the Democrats running, Jon Ossoff, has raised a remarkable $8 million, and his success in a Republican-leaning district could presage a midterm backlash against Mr. Trump. (Voters will pick from candidates of both parties on a single ballot; if no one clears 50 percent, the top two finishers will advance to a runoff election.)

But the way the Republican hopefuls are running is just as instructive. Even as they try to win over the sort of conservative activists dedicated enough to participate in a rare April election, the Republicans are casting themselves more as can-do pragmatists in the spirit of Mr. Trump than unwavering ideologues. At the forum and in individual interviews afterward, three of the Republicans in the 18-person field invoked some variation of Ronald Reagan’s maxim that it is better to get 80 percent of what you want than nothing at all.

Few embraced the Tea Party moniker. And none of the highest-polling candidates pledged to join the Freedom Caucus, the hard-line conservative group whose uncompromising ideology helped derail Mr. Trump’s efforts to repeal the Affordable Care Act.

Bob Gray, who calls himself an outsider and is a businessman supported by the conservative Club for Growth, played to type at the forum as he twice criticized Speaker Paul D. Ryan for having “failed” on the health care legislation. But in an interview, Mr. Gray allowed that he would have backed the House-drafted bill (which the Club for Growth opposed), shied away from the Tea Party label and sounded more like a furrowed-brow centrist than a fire-breathing conservative.

Nowhere has the newly muddled nature of the party been more evident than in the fallout from the Republican failure to repeal the Affordable Care Act. Activists are angry over the display of dysfunction, but they are uncertain whom to turn their guns on. They will not blame Mr. Trump, because to fault him is to link arms with the left and an adversarial news media, a nonstarter in an era of tribal politics.

Some on the right are tempted to point a finger at Mr. Ryan, a pillar of the pre-Trump party establishment, but that approach has been complicated by Mr. Trump’s decision to align himself with the speaker, both on the health care issue and more broadly.

This leaves the Freedom Caucus. But these lawmakers, backed by an array of right-leaning outside groups, are some of the most dependably conservative members of Congress and were hailed for their steadfast opposition in the Obama years.

“For eight years, the heroes in this movement were the Freedom Caucus members, and now they’re suddenly in the bad camp?” asked the Republican strategist Chip Lake, a touch of wonder in his voice. “It’s really confusing right now as a Republican to figure out who’s on first.”

The Times has made it a habit of late of supercharged labeling. Thursday’s Times featured conservative label overload in Jennifer Steinhauer and Robert Pear's “As Latest Health Plan Dies, Republicans Can’t Agree on a Culprit.” The label count: 12 “conservatives,” 1 hard-line, 1 hard-right, pitted against 6 “moderates” usually with the qualifier “more moderate.” A sampler:

Conservative groups moved quickly on Wednesday to shift the blame for the failure of a seven-year promise to repeal the law onto some not-as-conservative Republicans, after a small but powerful group of hard-line House conservatives failed again to come to a meeting of the minds with the Trump administration over how best to repeal and replace President Barack Obama’s signature achievement....In fact, the entire effort never really had the scent of veracity. Any effort to appeal to the hard-right members of the House Freedom Caucus was always going to repel Republicans in swing districts, especially those won in November by Hillary Clinton.