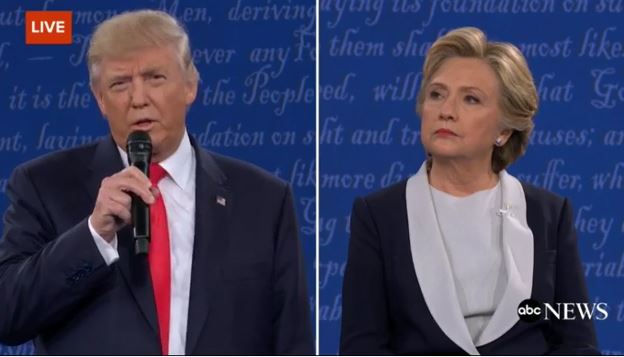 In Tuesday’s New York Times, legal reporter Charlie Savage went way overboard fear-mongering over a quip Donald Trump made to Hillary Clinton during their debate Sunday night in “Pledge to Put Clinton in Jail Gets Experts Thinking of ‘Tin-Pot Dictators.’” Text box: “Another statement portrayed as a threat to the rule of law.”

Trump’s “you’d be in jail” rejoinder to Hillary Clinton came during a heated discussion of her handling of classified documents, and the media (and some Republicans as well as Democrats) aggressively misrepresented it to liken Trump to a dictator. One wonders where this concern about careful rhetoric and the rule of law was when the left howled for war crimes tribunals for President Bush and Vice President Dick Cheney.

As president of the United States, Donald J. Trump would wield the power to carry out his vow to have a special prosecutor reopen the investigation into Hillary Clinton’s emails -- if not to guarantee his threat to her that “you’d be in jail” if he ran the country.

But the move would take American democracy to a dangerous new place, legal specialists across the ideological spectrum said.

Early in the debate on Sunday, Mr. Trump brought up the Justice Department’s investigation into Mrs. Clinton’s use of a private email server while secretary of state. That case was closed without charges on the recommendation of the director of the F.B.I., James B. Comey, but Mr. Trump said he would order it reopened.

“If I win, I am going to instruct my attorney general to get a special prosecutor to look into your situation because there has never been so many lies, so much deception,” he said.

In response, Mrs. Clinton accused Mr. Trump of falsely describing the facts of the case, adding: “It’s just awfully good that someone with the temperament of Donald Trump is not in charge of the law in our country.”

Mr. Trump shot back: “Because you’d be in jail.”

The assertion by Mr. Trump is taking its place in a litany of statements he has made during the campaign that many legal specialists have portrayed as a threat to the rule of law. Those include his declaration that a judge could not be trusted because of his ethnicity; attacks on the press; and threats to use federal regulators against his critics.

All that from a throwaway line at a debate?

Jonathan H. Adler, a Case Western Reserve University law professor, noted that presidents of both parties had been centralizing control over executive branch decisions in the White House since the 1980s, and portrayed Mr. Trump’s threat as foreshadowing further fraying of institutional checks and balances.

“The appearance of the justice system being used for partisan payback is poisonous,” he said.

Still, several of the conservatives who were critical of Mr. Trump’s threat also drew a parallel to a statement in June 2008 by Eric H. Holder Jr., who was then an adviser to Senator Barack Obama’s campaign and later became attorney general.

In a speech, Mr. Holder denounced the George W. Bush administration as having led the country astray from its “commitment to the Constitution and to the rule of law” after the terrorist attacks of Sept. 11, 2001, and declared that “we owe the American people a reckoning.”

“Be afraid of any candidate who says he will order DOJ/FBI to act on his command,” Mr. Holder wrote. Using Mr. Trump’s Twitter account name, he added: “In the USA we do not threaten to jail political opponents. @realDonaldTrump said he would. He is promising to abuse the power of the office.”

Michael B. Mukasey, a former federal judge and attorney general in the George W. Bush administration who has criticized Mrs. Clinton over the email issue...likened Mr. Trump’s threat to what happens in a “banana republic.”

But Noah Rothman at Commentary threw some cold water on the media’s outrageous outrage, which “seems almost entirely divorced from what Trump actually said.”

Trump’s quip was an interjection that occurred after Hillary Clinton insisted that “it’s just awfully good that someone with the temperament of Donald Trump is not in charge of the law in our country.” The response from Democrats and the press to this remark has not been circumspect.

If Trump had, indeed, pledged to use the immense powers of the presidency to summarily throw his political opponent in prison, it would be a stunning and dangerous pledge. Trump has demonstrated no regard for the constitutional process or the separation of powers, so it’s hard to extend to him the benefit of the doubt. But that is not what Donald Trump said. In fact, as Trump outrages go, what the celebrity candidate promised was pretty unremarkable.

As for Trump’s quip about seeing Clinton in jail, which his campaign has since walked back, we cannot reasonably conclude that this was not mere rhetorical flourish. Was he joking? Was he predicting the outcome of a lawful investigation? Was he pledging to intervene in that process and lock Clinton up without due process? We cannot know...By contending that he would instruct his attorney general to appoint a special prosecutor, Trump demonstrated perhaps the highest level of civic competence he has shown in his entire presidential campaign. The hand-wringing over what Trump said is, in this case, hyperbolic....