Monday’s New York Times highlighted Democratic “discord” on the eve of the Democratic National Convention in Philadelphia, as outrage about the contents of a massive email leak from the Democratic National Committee, showing the DNC colluding to scuttle the insurgent campaign of Sen. Bernie Sanders in favor of Hillary Clinton. That led to the announced resignation of DNC Chairwoman Debbie Wasserman Schultz and the promise of something less than brotherly love among Democrats in Philadelphia this week.

But a “White House Letter” from Julie Hirschfeld Davis was more congenial to Democratic feelings: “Obama: A Character Witness and a Prominent Clinton Convert.” Meanwhile, the Times can’t decide if Hillary Clinton’s running mate Tim Kaine is a liberal or a centrist (sometimes he’s both within two sentences).

Davis used President Obama as the wind beneath the wings of Hillary Clinton:

As Donald J. Trump accepted the Republican nomination at his party’s convention last week in Cleveland, President Obama did some subtle counterprogramming at the White House, hosting a reception honoring Muslim-Americans and inviting the Mexican president for a visit to highlight their close bond.

The implied contrast could not have been stronger between Mr. Trump, whose convention speech depicted a divided nation in crisis, one fearful of outsiders, and Mr. Obama, who spoke of inclusion, prosperity and cross-border partnership.

This week, Mr. Obama will take a more direct approach to countering Mr. Trump as he works to unite Democrats around Hillary Clinton’s candidacy and persuade independent voters to back her as well. In media interviews and a prime-time televised speech scheduled for Wednesday night, his aides say, the president will defend his economic and foreign policy record, arguing that the nation is safer and more prosperous because of them -- and that Mrs. Clinton is best positioned to protect them. 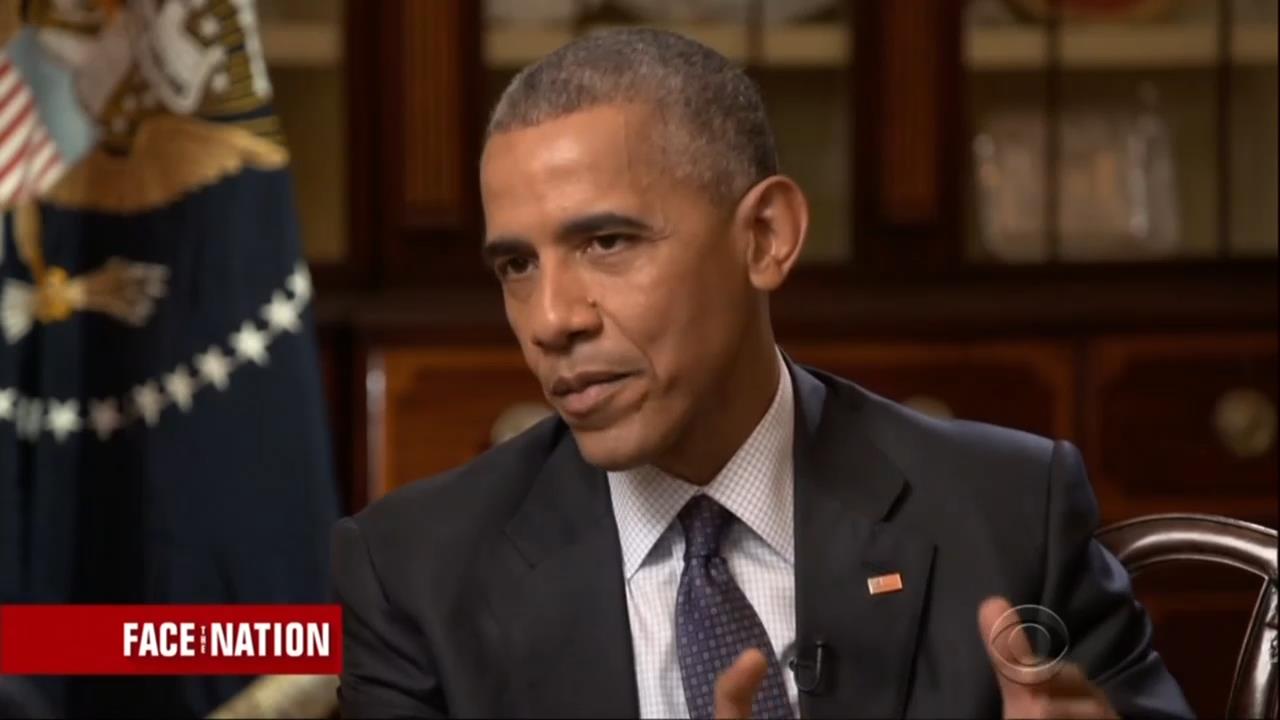 “The accumulation of work that we have done moved the needle,” Mr. Obama told CBS in the first of those appearances, an interview that aired on Sunday on Face the Nation. “It didn’t revolutionize the country, but it bent that arc, and my job is to make sure that when I leave this place, America is a little bit better off. It’ll be up to the next person to continue that process.”

No opposing views made it into Davis’s gusher of a story. Davis is a reliable protector of the president, when she’s not attacking him from the left for failures on amnesty for illegals or letting more migrants into the United States.

Mr. Obama is well positioned to be a character witness for Mrs. Clinton, his advisers argue, because of his popularity -- 53 percent of Americans approve of his job performance, according to this month’s New York Times/CBS News poll -- and because he is a prominent convert to her cause, a once-bitter campaign rival who came to trust and respect her.

Mr. Obama also says he is at the top of his game; only now, he appears to be as concerned about defeating Mr. Trump as he is about cementing his own governing legacy.

“I feel as if I’m a better president than I’ve ever been,” Mr. Obama said on CBS, adding that his team is operating at a “peak level.”

“But I also think that it’s really important for self-governance and democracy that we go through this process,” Mr. Obama added, “and I’m able to turn over the keys.”

Plus: Is Clinton’s running mate Sen. Tim Kaine liberal or centrist? The Times still can’t decide in Monday’s lead story by Jonathan Martin and Alan Rappeport on the shock resignation of DNC chairwoman Wasserman Schultz,  “Discord for Party on Eve of Its Convention.”

After the announcement on Friday that Mr. Kaine was joining the ticket, some die-hard supporters of Mr. Sanders complained that the choice of a centrist Democrat was evidence that Mrs. Clinton had merely been paying lip service to the party’s progressive wing.

The same “centrist” who earned a 0 rating from the American Conservative Union in his two years of service in the Senate, and a perfect score from Planned Parenthood.

Adam Nagourney called Kaine a “moderate” in Monday's “How Can Clinton Sell Herself To Voters Who Already Know Her?”

Liberal columnist Charles Blow went both ways, calling Kaine both “a Democratic centrist” and "a solid liberal” in the space of two sentences in his Monday piece. His prediction that “There will also be less acrimony in Philadelphia” than there was in Cleveland seems a little rose-colored in the wake of the Wasserman Schultz imbroglio.