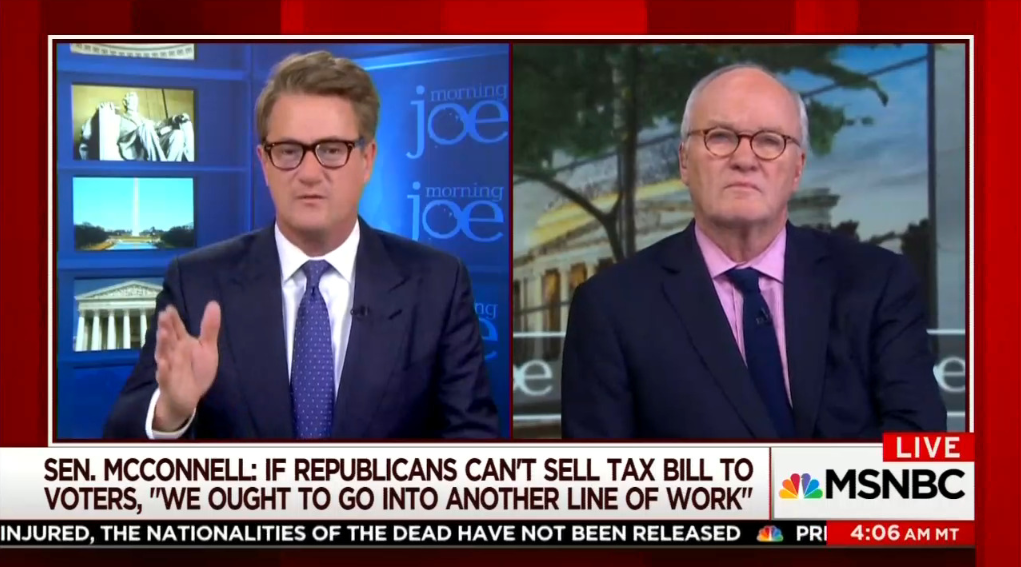 With the passage of the Republicans’ $1.5 trillion tax cut bill looming, most of Wednesday’s Morning Joe was devoted to portraying the legislation as not just bad policy (which would be par for the course on MSNBC), but a threat to America’s survival, prosperity, and democracy.

“Conservative” co-host Joe Scarborough, echoing the comments of former Federal Reserve Chair Alan Greenspan, put on his Marxist cap to make the case that “the greatest threat to American-styled capitalism [is] income disparity.” Scarborough argued that the Republican tax reform effort would “add fuel to that fire” by ensuring that “the rich” continue “getting richer.” Joe even asserted that the partisanship surrounding the passage of the bill was evidence that “Western-style democracies just don’t work anymore.”

One representative exchange from Joe’s coverage of the tax cut legislation started off with Scarborough rehashing old ‘90s anti-tax cut arguments from Democrats like Bill Clinton that Joe thought were applicable to the current Republican bill:

A very big haul. And it’s, it’s gonna be made so much harder by what the Republican Party just did yesterday with this tax cut, which, you know, if you believe estimates, will put us 1.5 to 2 trillion dollars deeper into debt. Uh, and Mike Barnicle, that does make any future cuts seem even more savage. Democrats, Bill Clinton, he, uh, back in the '90s, was, was -- his attack line – and it worked – was: Those Republicans are cutting Medicare to pay for tax cuts for the rich. Those Republicans are cutting benefits for the poorest Americans to pay for tax cuts for the rich. Whatever we did, it was always turned around and turned back to that, that punchline. And I'm not so sure that the Republicans didn't walk right into that trap in 2018, despite the fact there have been a lot of business people saying it's insane that the United States has the highest corporate tax rate in the world. So, how does this wash out for ‘em?

Oh, Joe, I'm not gonna pretend to be, you know, be an expert on the intricacies of this, you know, tax bill that was, uh, what will be passed again today. Uh, you know, I can't even balance a checkbook back in the days when people had checkbooks. But, I have been stunned at the number of people, ordinary people, who, who are worried about the size of the debt that's gonna be incurred as a result of this tax bill. I’ve actually heard a lot of people speaking about it. Again, ordinary people. The other aspect of this bill that is really threatening to the way laws are passed, the way this country survives and prospers, is the increased and continuing polarization that surrounded this bill and the idea that one particular party, the Republican Party, went out of its way to remove 13 million people from the health rolls and are proud of it and the fact that the bill was, you know, no hearings on the bill, no real communication back and forth between Republicans and Democrats on, as Noah said, a generation-altering tax bill. It's, it’s really a continuation of a system that has to be improved. It has to be addressed or else we’re gonna be in even bigger trouble than we are in today.

Scarborough and BBC World News America anchor Katty Kay amplified Barnicle’s points by arguing that the tax bill was symptomatic of a larger deterioration of Western democracy in both the United States and Europe:

SCARBOROUGH: This is a con-, a continuation of a system that right now, unfortunately, just doesn't work. And it certainly didn't, hasn't worked effectively for the past 15 or 20 years in part, Katty Kay, because of divisions. But if you look at what's happening in the United States and you look at what’s happening in Great Britain, you look at what's happening in Germany, you have autotr-, autocrats across the globe -- this is, it's almost like we're going back to Cold War debates about what works and what doesn't work. You look at how tied up Congress is and how partisan Congress is, and they can't even have a debate, an open debate on the floor, and have regular order. You look at Teresa May failing with Brexit votes and having a government together, but not really having a government together. The same thing with Angela Merkel in Germany. You can begin to make an argument if you’re Vladimir Putin than [sic] Western-style democracies just don't work anymore.

KAY: Yeah, and if you take this tax bill as an exact example of that, Joe, perhaps one of the most interesting things was the fact that you had conservative Democrats, people like Joe Manchin, who said: Look, I was an easy get on this bill. I could have been got. The Republicans could have brought me over to their side. But what they chose to do with this bill was just too egregious for even somebody like Joe Manchin that they, as h-, as Manchin puts it: They just decided to make this a tax bill for the corporations and not for average Americans. And at that point, he couldn't support it. Tester, another one who said: Look, I'm a fiscal conservative. Montanans are fiscal conservatives. It matters them [sic] to build up the, the, the debt like this. And for my constituents, for people in the state of Montana, this is just taxing the next generation. It’s putting an onerous burden on our children and I can’t support it. When you got them saying this is not a bill that we can go along with, then you know the kind of problem that we are [sic] in the United States. You cannot reform the economy in this way without some measure of bipartisanship, and this bill has absolutely none of that.

Well, apparently you can reform the economy in that way, because congressional Republicans just passed the bill after going through all of the constitutional and procedural requirements necessary to create a new law. Democrats refusing to be a part of that process now does not undermine democracy or the rule of law any more than it did back in 2010 when Republicans collectively refused to vote for ObamaCare.

Losing elections has consequences for both parties, and in this case, it has been to the Democrats’ detriment.

Scarborough followed up Kay’s remarks by once again speaking out in defense of the minority party. This time, however, he did not do so by dredging up old Clintonian talking points. Instead, he went straight to the classic Marxist dialectic of pitting rich against poor in a battle for economic dominance, all the while insisting on the purity of his “conservative” credentials:

When, Willie, I -- you know, I, I've always, um, been a big supporter of cutting taxes. It’s -- I believe the government taxes too much. I think they take too much of Americans’ money, too much of workers' money. And I believed that even before I moved to Connecticut and paid 55% of every dollar in taxes. [laughs] Uh, but, in this case, it seems like this is the wrong tax cut at the wrong time directed at the wrong people, because if you look at our biggest problems, I, as a conservative, I think it's the national debt. This adds 1.5 trillion to the national debt, up to 2 trillion. It doesn't pay for itself, regardless of any-, what anybody tells you, every study shows it doesn’t pay for itself. Secondly, our economy is humming at a record rate. We've had, had more, uh, sto-, uh, corporations at least, we’ve had more stock market highs this year than any year on record. And third, the rich are getting richer. I mean, this is -- Alan Greenspan, [sarcasm] that leftist Marxist himself, Alan Greenspan said some time ago that the greatest threat to American-styled capitalism was income disparity, that the rich were getting richer and the poor were getting poorer. This adds fuel to that fire, as well as the national debt. It just doesn't seem to make sense if you’re a conservative.

Greenspan and Scarborough may not be Marxists, but talking about public policy in terms of class warfare is. As both Karl Marx and his longtime intellectual collaborator Friedrich Engels repeatedly noted in their writings, “progressive” taxation targeted at bringing down the “bourgeois,” capitalist class was a key element of the practical implementation of communist principles. From The Communist Manifesto:

We have seen above, that the first step in the revolution by the working class is to raise the proletariat to the position of ruling class to win the battle of democracy.

The proletariat will use its political supremacy to wrest, by degree, all capital from the bourgeoisie, to centralise all instruments of production in the hands of the State, i.e., of the proletariat organised as the ruling class; and to increase the total productive forces as rapidly as  possible.

Of course, in the beginning, this cannot be effected except by means of despotic inroads on the rights of property [...].

These measures will, of course, be different in different countries.

Nevertheless, in most advanced countries, the following will be pretty generally applicable.

3. Abolition of all rights of inheritance.

Engels also wrote in support of a progressive income tax and an estate tax as an essential part of communist policy in The Principles of Communism:

Democracy would be wholly valueless to the proletariat if it were not immediately used as a means for putting through measures directed against private property and ensuring the livelihood of the proletariat. The main measures, emerging as the necessary result of existing relations, are the following:

Marx and Engels put similar policy proposals in their 1848 draft of the Demands of the Communist Party in Germany, calling in point 14 for “[t]he right of inheritance to be curtailed” and in point 15 for “[t]he introduction of steeply graduated taxes.”

Needless to say, the fact that the concept of progressive taxation has roots in communist philosophy does not invalidate it as a policy per se, nor does it mean that everyone who proposes such a policy is a Marxist. However, treating class conflict theory and its political prescriptions as a conservative way of looking at tax policy as Scarborough did is simply ludicrous.

The only substantive opposition to Scarborough’s argument that today’s tax cut legislation is the epitome of Republican bourgeois exploitation of the American proletariat came from Commentary Magazine Associate Editor Noah Rothman. Roughly halfway through the second hour of Joe’s broadcast, Rothman pointed out that allowing American corporations to keep more of their profits for future capital investment should benefit America’s economic growth over time according to the assumptions of most modern economic theorists, not just Republicans. Rothman raised Obama’s 2012 proposal for cutting the corporate tax rate as evidence of this, but no one else on the panel really took Noah’s point to heart.