Public schools are reopening for business across America, meaning it’s time to get  back to reading, writing, arithmetic….and revolution.

As usual in matters such as these, California is leading the way.

On the first day of classes at Denair Middle School near Modesto science teacher Luis Davila Alvarado handed out worksheets from a transgender advocacy group titled “The Gender Unicorn” asking students about their “gender identity,” “gender expression,” and their sexual and emotional attractions.

These are children. And yet the teacher did not ask permission to hand this out. Most parents were outraged. The school estimated about 50 children received the worksheet. It turns out Alvarado was educating the children about his own life. He declared he rejects the term “Mr.” and prefers to be addressed with the newfangled “Mx.,” pronounced “Mix.” A school official quickly put a stop to it, but the damage was done. 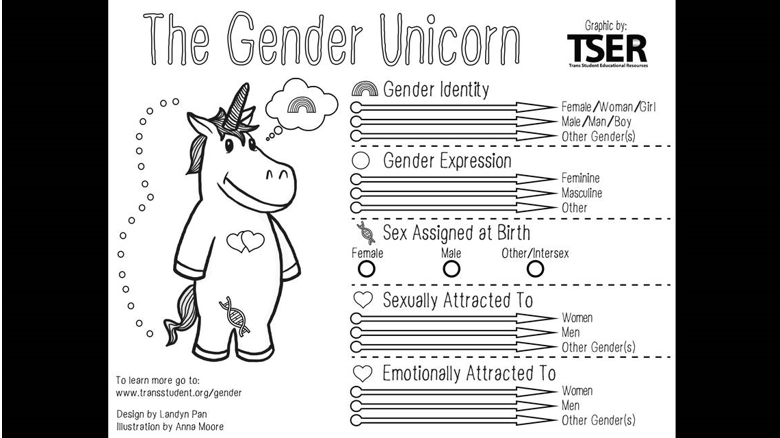 In California, waiting until middle school for this boatload of propaganda is actually inappropriate! In May, the California Board of Education established a set of guidelines insisting schools should begin discussing “gender identity” in kindergarten. “While students may not fully understand the concepts of gender expression and identity,” the guidelines insist, “some children in kindergarten and even younger have identified as transgender or understand they have a gender identity that is different from their sex assigned at birth.” Schools apparently must leap to address the “harm of negative gender stereotypes.”

Public schools aren’t just undermining parents with the curriculum. When children “decide” they “might” be transgender,  parents better not object or else they will be treated as a threat to their own children’s well-being.

On August 12, USA Today published a chilling op-ed from Jay Keck, a parent in the Chicago suburbs, about how his autistic teenaged daughter – who “showed no signs” of being unhappy with her gender -- suddenly decided in 2016 that she was male and wanted to be addressed with male pronouns.

She first “came out” at school, and the school immediately addressed her with male pronouns and provided access to a gender-neutral bathroom. When Keck and his wife found out, they insisted the school address their daughter by her legal name – and they were ignored. They met with an assistant superintendent, who asserted the school had to “follow the law” – a non-binding directive from the Obama administration which was repealed by Team Trump.

According to Keck, surprise, surprise:  the ACLU has sent threatening letters to schools telling them that “students have the constitutional right to share or withhold information about their sexual orientation or gender identity from their parents, teachers, and other parties.”

Then the real nightmare kicked in. Put yourself in the position of the Keck family.

Keck said his daughter told him that the school social worker was advising her about halfway houses. “The social worker confirmed this when I scheduled a meeting with him to discuss it. This felt like a horrifying attempt to encourage our daughter to run away from home.”

When Keck had his daughter evaluated by a psychologist approved by the school district, he said “it was very clear that our daughter’s sudden transgender identity was driven by her underlying mental health conditions, but would only share his thoughts off the record, because he feared the potential backlash.” When his daughter graduated high school, parental wishes that her birth name would be announced were again ignored.

This growing gender-bending orthodoxy is what Pope Benedict called the “dictatorship of relativism,” or, if you prefer, “the tyranny of tolerance.” Dissent – even from parents – is being condemned  as bigotry, cruelty, and hate speech.

This will not stop until the nuclear family is destroyed. Or until parents stand up as one and declare a commitment to destroy this movement.