Eli Lake at Bloomberg News reported on April 3 that President Trump’s lawyers discovered it was Obama’s former national security adviser Susan Rice who “requested the identities of U.S. persons in raw intelligence reports on dozens of occasions that connect to the Donald Trump transition and campaign.” 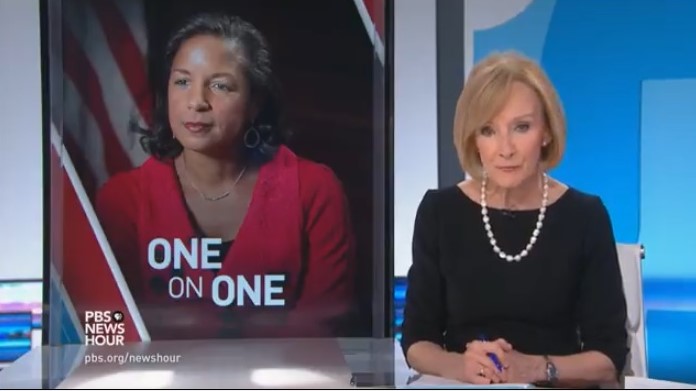 Susan Rice, at the center of another scandal? Yes, and she’s lying about it on TV again. On the PBS NewsHour on March 22, anchor Judy Woodruff introduced the interview by telling viewers she asked Rice about whether Trump and his transition officials “may have been swept up in surveillance of foreigners at the end of the Obama administration.”

Rice protested "I know nothing about this," adding, "I was surprised to see reports from Chairman Nunes on that account today." The Obama appointees were supposed to be smart, and yet they always say they didn’t know anything.

The PBS interview came about because The Washington Post allowed Rice to make a transparently hypocritical argument on its op-ed page that day about truth-twisting. A preposterous promotional e-mail headline read: “Susan Rice: When the White House twists the truth, we are all less safe. The actions of America’s allies — and enemies — depend on our perceived credibility.”

On September 16, 2012 – five days after radical Islamic terrorists killed four Americans in Benghazi, Libya -- Susan Rice lied through her teeth on five Sunday news programs that this pre-planned attack with rocket launchers was somehow a “spontaneous reaction” to a “hateful and offensive video” on YouTube. Then, like many liars, she had the audacity in 2014 to declare on “Meet the Press” that “What I said to you that morning, and what I did every day since, was to share the best information that we had at the time.”

Everyone knows that is patently false. Evidence flowed in that the president and Hillary Clinton and Susan Rice knew it was a terrorist attack. But everyone claimed otherwise for more than a week. They had an election to win. The media gently helped them lie.

Journalists now declare in self-righteous tones that they care dearly about the facts and will never spread delusions. But Judy Woodruff threw a softball, asking Rice to explain the “serious charge” against Trump in her Post article. She never made the obvious point that Rice was the least qualified bureaucrat to lecture anyone else about telling the truth on national security issues.

Eli Lake’s story on Rice wasn’t evaluated for truth or falsehood. It was dismissed as a “pro-Trump” story designed to change the subject (or the target). ABC and NBC skipped any mention of it on their evening newscasts. CBS mentioned it in passing.

CNN anchor Don Lemon spoke for many journalists as he hissed. “There is no evidence that backs up the president’s original claim. And on this program tonight, we will not insult your intelligence by pretending otherwise, nor will we aid and abet the people who are trying to misinform you, the American people, by creating a diversion.”

“Aid and abet.” The “objective” anchors at CNN treat the president as a criminal in their metaphors. The media don't care first about "facts." They care first about liberal victory. Their hope now is to remove Trump from office. Keep that in mind when they speak.