ABC's Moran: Obama 'Too Nice,' Empathizes: 'You Got No Honeymoon'

In excerpts aired on Tuesday's World News, of Terry Moran's interview with President Barack Obama for Nightline, Moran was as sycophantic toward Obama as he was during the campaign, lamenting Obama “got no honeymoon” and bemoaning the new President had been “too nice” to Republicans. “Mr. President,” Moran rued in overlooking the ongoing honeymoon from the media, “you got no honeymoon. Not a single Republican vote in the House on your first major piece of legislation.” Moran speculated: “I wonder in coming into the presidency, maybe you were too nice? If I'm a Republican Senator or a Republican Congressman, I think you're a very nice guy but maybe I don't have enough reason to fear you.”

Earlier, Moran cued up Obama: “How close do you think the country is to the kind of economic catastrophe that you're warning about?” In the ABCNews.com transcript, which does not include the “honeymoon” lament, the tri-anchor of Nightline suggested the banks should just be nationalized: “There are a lot of economists who look at these banks and they say all that garbage that's in them renders them essentially insolvent. Why not just nationalize the banks?” (That did not air on World News, but was part of what Nightline ran later.)

Two quotes from Moran's fawning approach to Obama during the campaign, as posted with video, in the MRC's special November 3, 2008 edition of Notable Quotables, “Campaign 2008 Review: Barack Obama's Media Groupies.”

“You can see it in the crowds. The thrill, the hope. How they surge toward him. You’re looking at an American political phenomenon....He inspires the party faithful and many others, like no one else on the scene today....And the question you can sense on everyone’s mind, as they listen so intently to him, is he the one? Is Barack Obama the man, the black man, who could lead the Democrats back to the White House and maybe even unite the country?...Everywhere he goes, people want him to run for President, especially in Iowa, cradle of presidential contenders. Around here, they’re even naming babies after him.”
— ABC Nightline co-anchor Terry Moran, Nov. 6, 2006.

“Now to Barack Obama. When I spent the day with him in Iowa over the weekend, you could sense the excitement he nearly always generates....Whatever he’s eating, it is working for Obama....Here as elsewhere, the crowd listens closely to Barack Obama’s real argument, that he is tomorrow, a fresh face who represents a real change from our bitter polarized politics....When you talk to Iowa voters who come to hear Obama, you get the sense they know they might be part of something big here, something historic.”
— ABC’s Terry Moran on Nightline, November 26, 2007.

At the top of the Tuesday, February 10 World News viewers saw a quick exchange in which Moran told Obama, referring to Treasury Secretary Timothy Geithner's comments: “Judging by the reaction in the markets, Wall Street really doesn't like your plan.”

After a story on Geithner's vague financial system plan, ABC played more from Moran's interview recorded in Ft. Myers, Florida (note: because of editing and inaccurate transcribing, this does not match the online transcript, but this matches what aired on World News): 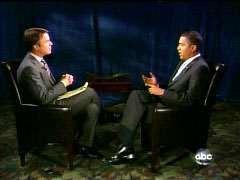 TERRY MORAN: Can you say how much, ballpark figure, that will cost the American taxpayers. A trillion? Trillion-five? Two trillion?

PRESIDENT BARACK OBAMA: I can't say what a ballpark figure, what I can say-

OBAMA: Well, because ultimately, what happens is going to depend on how the markets respond over the long term, not today or the next day but a month from now or two months from now. How effective we are in actually cleaning out some of these bad assets out of these banks.

MORAN: You've been sounding some very dire warnings about the economy in recent days. How close do you think the country is to the kind of economic catastrophe that you're warning about?

PRESIDENT OBAMA: Well, you know, I'm constantly trying to thread the needle between sounding alarmist but also letting the American people know the circumstances that we're in. We are in a perfect storm of financial problems and so this is a big, difficult situation. Now, I think we've got to keep perspective. We're not going through the Great Depression. 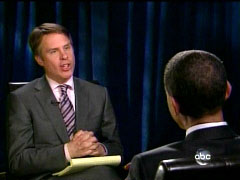 TERRY MORAN: Mr. President, you got no honeymoon. Not a single Republican vote in the House on your first major piece of legislation.

TERRY MORAN: But what happened in Washington?

PRESIDENT OBAMA: Oh, what happened in Washington was, I think that they made a decision that they want to continue the same fights that we've been having over the last decade. The American people, on the other hand, realize we want something different; hence, the results of the election.

MORAN: I wonder in coming into the presidency, maybe you were too nice. If I'm a Republican Senator or a Republican Congressman, I think you're a very nice guy but maybe I don't have enough reason to fear you.

PRESIDENT OBAMA: [LAUGHS] Well, I tell you what -- you know, that accusation -- I think, if I'm not mistaken, was leveled at me a couple years ago and I'm going to be flying out on Air Force One in a little bit. So, people shouldn't underestimate the, the value of civility and, and trying to get people to work together.