On Friday's New Day, when co-host Alisyn Camerota brought up Hillary Clinton being asked a question about her husband's history of forcible rape and other sexual assaults, CNN's John King whitewashed the accusations against former President Bill Clinton as he only vaguely recounted the behavior, and even ended up lamenting that the question must have been a "sad trip" and "not a pleasant trip down memory lane" for Hillary Clinton.

King downplayed the forcible rape accusation by Juanita Broaddrick as he described it merely as "conduct" that "he (Bill Clinton) said never happened," after referring to Paula Jones's charge that included indecent exposure merely as "pressuring her."

Hey, John, I want to ask you about what happened at a Hillary Clinton campaign stop yesterday in New Hampshire. She got a question that she and her campaign must have been dreading about rape accusations -- old rape accusations against Bill Clinton. Listen to this.

Then came a clip from the town hall event:

UNIDENTIFIED FEMALE AUDIENCE MEMBER: Secretary Clinton, you recently came out to say that all rape victims should be believed. But would you say that about Juanita Broaddrick, Kathleen Willey, and Paula Jones? Should we believe them as well?

HILLARY CLINTON: Well, I would say that everybody should be believed at first until they are disbelieved based on evidence.

Camerota added: "John, what do you think?"

Well, it's a, look, if you're going to do town halls, you have to prepare for this. And if you're Hillary Clinton, you have to know, as some point in a town hall, that someone is going to get up and bring up your husband and his past. I lived those days. I covered Bill Clinton back in those days.

After recounting that Paula Jones "never accused President Clinton of rape," King seemed unable to bring himself to forthrightly say the former President was, in fact, accused of "rape" by Juanita Broaddrick, as King was vague about the severity of the charges: 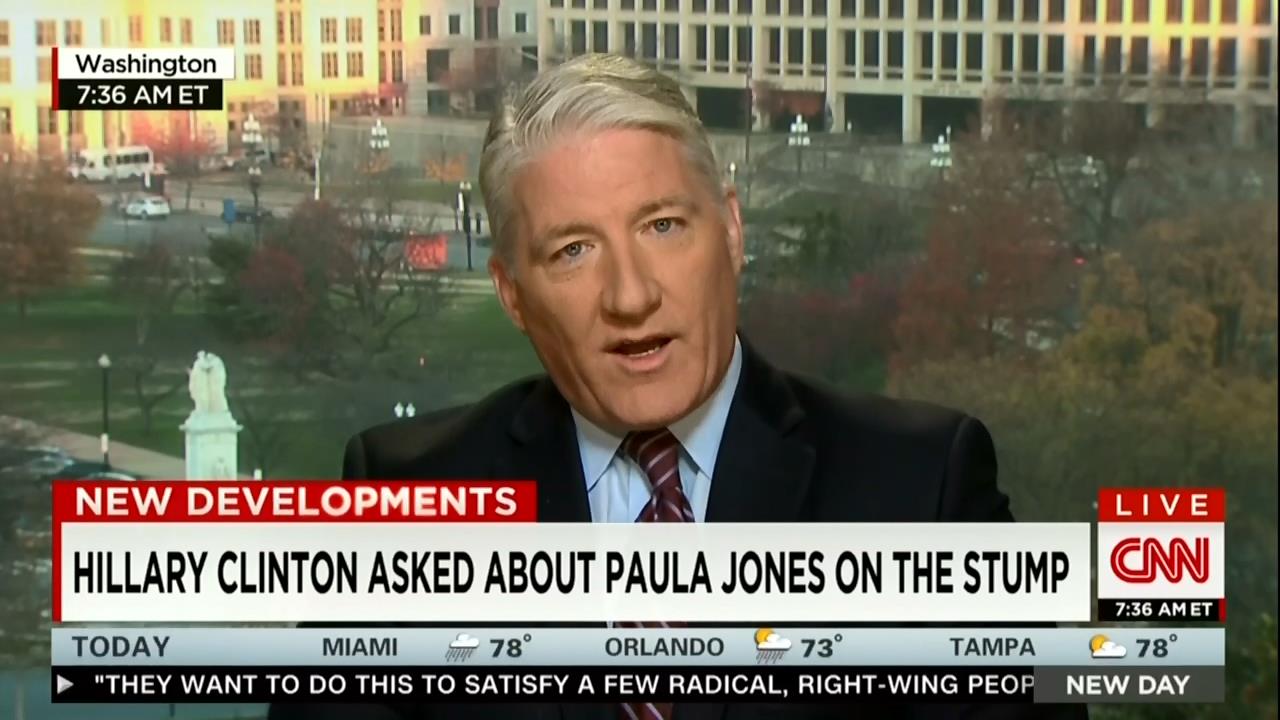 After noting that Hillary Clinton has a stronger position in the Democratic race than any of the candidates on the Republican side, King ended on a note of sympathy for her:

Just one last thing, just reminds you, you know, without the Paula Jones lawsuit, maybe we'd never find out about Monica Lewinsky. So it's a sad trip for Hillary Clinton, I'm sure it was not a pleasant trip down memory lane. But it won't be the last time something like this happens to her if she stays out there in the town hall environment.