Broadcast news networks ABC, CBS, and NBC continued to hammer away at the sexual assault allegations against Judge Brett Kavanaugh on Monday, using the seventh FBI inquiry into Kavanaugh’s past as the latest news hook to keep the Supreme Court nominee’s name in the headlines.

But a minuscule portion of the Kavanaugh coverage on these networks (three percent) was given to the memo released Sunday evening by sex crimes prosecutor Rachel Mitchell, whom Senate Republicans hired to question Christine Blasey-Ford during last Thursday’s hearing. Many have suggested the memo discredited much of Ford’s claims.

MRC analysts examined those three networks’ October 1 morning and evening news broadcasts and found a combined total of 65 minutes were spent harping on the still-unproven allegations against Kavanaugh (21 minutes on ABC, 24 on CBS, and 19 on NBC). The shows examined in this study included ABC's World News Tonight and Good Morning America, CBS's Evening News and CBS This Morning, and NBC's Nightly News and Today (excluding Megyn Kelly Today). 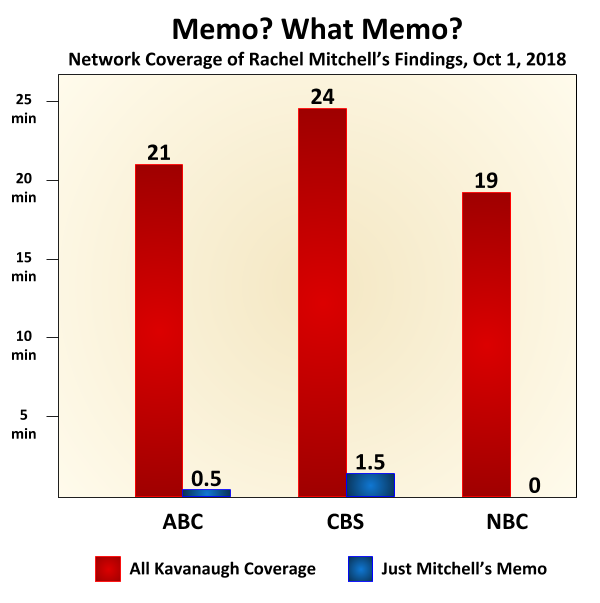 NBC ignored the Mitchell report entirely that day. ABC’s Good Morning America gave the memo only 28 seconds, while CBS This Morning spent 89 seconds discussing Mitchell’s findings. None of the three networks bothered to mention it again during their evening newscasts.

In her five-page memo, Mitchell concluded the following:

In the legal context, here is my bottom line: A “he said, she said” case is incredibly difficult to prove. But this case is even weaker than that. Dr. Ford identified other witnesses to the event, and those witnesses either refuted her allegations or failed to corroborate them. For the reasons discussed below, I do not think that a reasonable prosecutor would bring this case based on the evidence before the Committee. Nor do I believe that this evidence is sufficient to satisfy the preponderance-of-the-evidence standard.

Nightly News set aside time for Swetnick's wild tale even as they were forced to admit that they were unable to corroborate it: “But tonight, NBC News has not been able to independently corroborate Swetnick’s claims,” White House correspondent Peter Alexander reported. Then, after reaching out to people whom Avenatti claimed could support his client's story: “[o]ne says he does not recall anyone named Julie Swetnick, one is deceased. NBC News reached out to the other two and has not heard back.”

There was also no mention of Swetnick’s massive credibility problems, which Alexander’s NBC colleague Megyn Kelly exposed earlier in the day: “...It’s emerged from various reporting this weekend, she faced allegations of her own misconduct during a stint at a Portland company 18 years ago,” Kelly recited. “They said she engaged in unwelcome sexually offensive conduct herself.”

Likewise, CBS This Morning ran an interview with Ana Maria Archila, the liberal activist who cornered Senator Jeff Flake in an elevator on Friday morning to harangue about the importance of voting against Kavanaugh. That interview alone was more than three times longer (288 seconds) than all of the airtime the network spent on the memo.

The absurdly meager attention given to Mitchell’s memo mirrors the findings of another recent MRC study, which determined that only eight percent of ABC, CBS, and NBC’s coverage of Kavanaugh contained any mention of either his denials or Ford’s lack of corroboration.