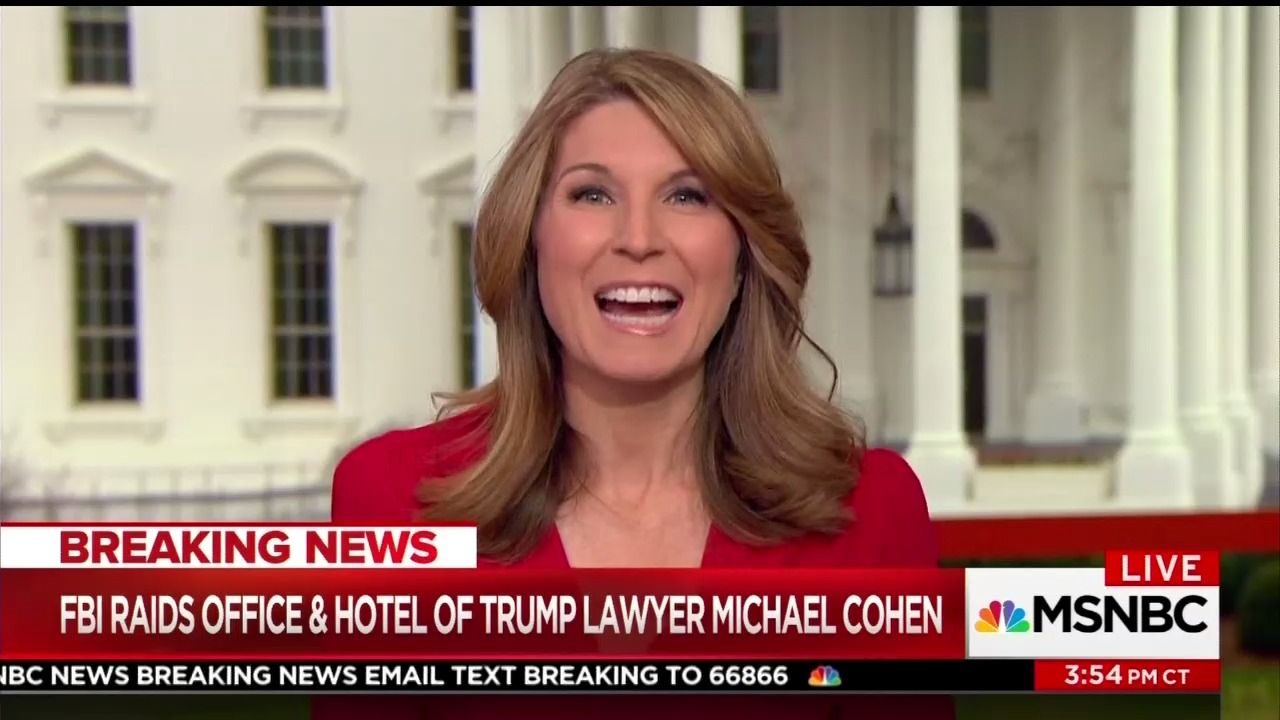 On a news day otherwise dominated by talk of the alleged chemical attack in Syria, MSNBC’s Nicolle Wallace flipped the script on Monday and spent a full commercial-free hour salivating over reports the FBI had raided the office of Trump lawyer Michael Cohen.

Donald Trump has lived rent-free in Wallace’s head for quite some time. Since her 4:00 p.m. show Deadline: White House first aired in May of 2017, she has dutifully spent every weekday obsessing over the President’s alleged misdeeds, with few exceptions. She quickly developed a particular fondness for speculating about the outcome of Robert Mueller’s counterintelligence probe into Russian interference in the 2016 election. Unsurprisingly, the majority of these hypothetical scenarios have ended with Trump’s impeachment.

Wallace smelled fresh meat upon learning of reporting by The New York Times that Cohen’s office had been raided. She seized upon the development to turn her show into an hour-long panel discussion that was rife with speculation about how this latest development would ultimately doom the Trump presidency.

Wallace grew ever bolder with her theories and assertions, and by the 30-minute mark, she was casually framing serious (unproven) allegations as established facts. Her viciousness appeared to spur on her fellow panelists – particularly New York Times columnist Bret Stephens. By the show’s conclusion, any pretense of objectivity had been thoroughly ground to dust, and the remains subsequently set aflame. Below are some of the most egregious examples from Monday’s panel discussion:

“It reminds us that the salacious and unverified details in the Steele dossier are eminently plausible.”
– Bret Stephens, The New York Times

“[Trump's] not a Bernie Madoff. This wasn’t a sophisticated financial scam. He basically ran a mom and pop operation with his kids, you know, making public appearances, and it was a less sophisticated operation.”
– Nicolle Wallace, MSNBC

“He’s not a Bond villain. He’s a Mike Myers villain. This is really what we’re talking about here.”
– Bret Stephens, The New York Times

“We now have a Presidency whose central defects, which are to say, the narcissism, the self-obsession, the triviality, and the meat and the pettiness, pettiness, and crim – potential criminality...”
– Bret Stephens, The New York Times

See below for a partial transcript of the panel discussion:

4:33 – 4:34
NICOLLE WALLACE: Chuck and I talked last week, there were some theories posited that simple bribery around the recrafting of the Republican platform, the change to a more pro-putin plank around, I think it was around Ukraine, could be something –

A.B. STODDARD: That wouldn't be under Mueller?

BRET STEPHENS: Well, look,  I think Bob Mueller is on very dangerous political terrain because I can almost write the editorials that will be a reaction to this. And at the center of those editorials is the question, what on Earth does this have to do with Russia? As far as most people know, Michael Cohen is the guy who apparently paid $130,000 to porn star with whom the President appears to have had a liaison over a decade ago. There is already a real question out there as to whether the President should fire Mueller. And if you talk to a lot of Republicans they'll say he's way out of his –

WALLACE: But he – he’s referred this to –

STEPHENS: Just to finish, so, Mueller -- we need to find out very quickly how this connects to -- to, at least in its broadest sense, a Russia investigation.

4:40 – 4:42
STODDARD: If he is blackmailable and compromised by the Russians because of financial crimes, having nothing to do with active collusion in the spring or summer of 2016, over the campaign of Hillary Clinton with government officials in Russia, he is still vulnerable to blackmail.

BRET STEPHENS: It reminds us that the salacious and unverified details in the Steele dossier are eminently plausible.

WALLACE: More so every day, right?

STODDARD: Buy even without the salacious, people are mostly concerned that this is a man –

STEPHENS: Sorry, I should have said, ‘salacious’ [scare quotes].

STODDARD: – who, along with Michael Cohen, wasn't afraid of some rules standing in his way as a businessman. And he was desperate to do a Trump Tower in Moscow, and he might be indebted to some Russians in ways that are not on the books. And that, in the end, is within Mueller’s purview. And Republicans will fight you to the nail on that every time, as if it’s from twenty years ago so it’s okay. It’s not. It will be part of this investigation if it’s true.

WALLACE: I get this um, I won't call it an admonishment, but I get chided sometimes for thinking too big about Donald Trump – for thinking that the crimes are things that I couldn't think of. And sthe sources always tell me, dumb it down. These could be – you and I talked about bribery. These could be things, you know, lapses in character that he believes his base will always forgive.  These could be things that he simply wanted to keep secret from his wife, whether because he cares about embarrassing her – which seems debatable – and/or he could have been bound by a pre-nup that prevented some behaviors like the kinds of things we're talking about, sex with a porn star and whatnot. What other things are sort of, low-tech crimes and less sophisticated crimes. And more – you know, someone said, he wasn’t this titan of business. He’s not a Bernie Madoff. There wasn’t a sophisticated financial scam. He basically ran a mom and pop operation with his kids, you know, making public appearances, and it was a less sophisticated operation.

48:21 – 49:46 (1 min, 25 sec)
STEPHENS: I mean, he's not a bond villain. He's a Mike Myers villain. This is what we're talking about here. Look, this is -- I think you just put your finger on it, which is that trump's entire career has been based on what he calls hyperbole, but hyperbole of a sort most of us would describe as lying. And this is, this has got to be something that worries him profoundly. Nick had a long list of things which are important to mention. I think it's also important to mention one reason to go after Michael Cohen is the same reason you go after George Papadopoulos and others, is that you need to start squeezing these guys because they know things, they know things that Trump has conspicuously been unwilling to reveal, and that has got to make Trump nervous.

WALLACE: I want to go back to the never released tax returns. The time we covered it incorrectly. We covered it as a norm that was busted. It was obviously a much bigger and different story. David Farenthold from the Washington post had a story last week where he laid out the three legal devices that are squeezing him and his financial records. The least sexy of which is the emoluments case in Virginia and D.C. Or Maryland and D.C. The other is avenatti's legal case and the other is the Mueller probe. Do you think those three investigations, we will eventually see those tax returns?

59:10 – 59:28
STEPHENS: We now have a Presidency whose central defects, which are to say, the narcissism, the self-obsession, the triviality, and the meat and the pettiness –