MSNBC's Martin Bashir has only been on the job for a few days, but the newly-minted anchor is already letting his liberal flag fly.

On his eponymous program today, Bashir was dumbfounded as to why Congress is reluctant to hike taxes on the rich and end tax deductions for oil companies. 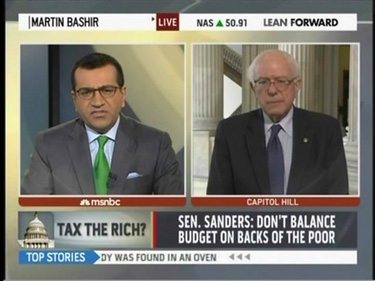 Bashir cherry-picked the findings of one poll to imply that Sanders's left-wing economic views – which include a single-payer health care system – enjoy national support, yet the former ABC anchor failed to identify the self-described socialist senator's political leanings.

While it is true the NBC-Wall Street Journal poll found that a vast majority of Americans support ending tax deductions for oil companies and still more support a surtax on people earning more than $1 million per year, the poll found popular support for several other issues that Bashir neglected to mention: 56 percent of Americans believe the Social Security retirement age should be raised, 62 percent support means-testing for Medicare, and 51 percent support nixing funding for the Obama health care overhaul, just to name a few.

In case his adulation for Sanders was in doubt, a bubbly Bashir concluded the interview on a sycophantic note: "Senator Bernie Sanders, as ever provocative and insightful, thank you very much for joining us."

Given that the majority of Americans don't even support the Obama health care overhaul, let alone a national single-payer system, Bashir's choice of Sanders as the bellwether of popular sentiment is bizarre at best and irresponsible at worst.

For an archive of Bashir's bias – including his smears of Sheriff Joe Arpaio and biased treatment of a small Catholic town in Florida – click here.

MARTIN BASHIR: What you just said almost mirrors our new NBC-Wall Street Journal poll. When asked about the best way to reduce the deficit, a full 80 percent of Americans favor a surtax on those earning more than $1 million. 78 percent said eliminate earmarks. 76 percent want to eliminate defense projects the Pentagon says it doesn't need, sorry the Pentagon says it doesn't need. And 74 percent said it's time to end subsidies for oil and gas companies. Why won't Congress simply do what the people want?

Sen. BERNIE SANDERS (I-Vt.) : Well what can I tell you? This senator believes absolutely – and I saw that poll – the most significant point you made, the highest percentage is people saying "look, the rich are getting richer." Why are you going to cut programs that the middle class and working families need. Ask these families to start paying their fair share. The effective tax rate today of the wealthiest people in this country is lower than it's ever been in recorded history in our country. So that's the obvious solution. So you ask me why? Well you know the answer to that. Who do you think controls the Republican Party? Big money controls the Republican Party. This is where their campaign contributions come from. So if I have anything to say about it, I'm going to do everything I can to see the Democratic caucus come forward and say "yeah, we do need to make some cuts." I think there are programs that could be cut, but bottom line is not to ask the wealthiest people in the country to pay their fair share after they received huge amounts of tax breaks is insane. What the Republicans are saying is way outside of what the average American believes.