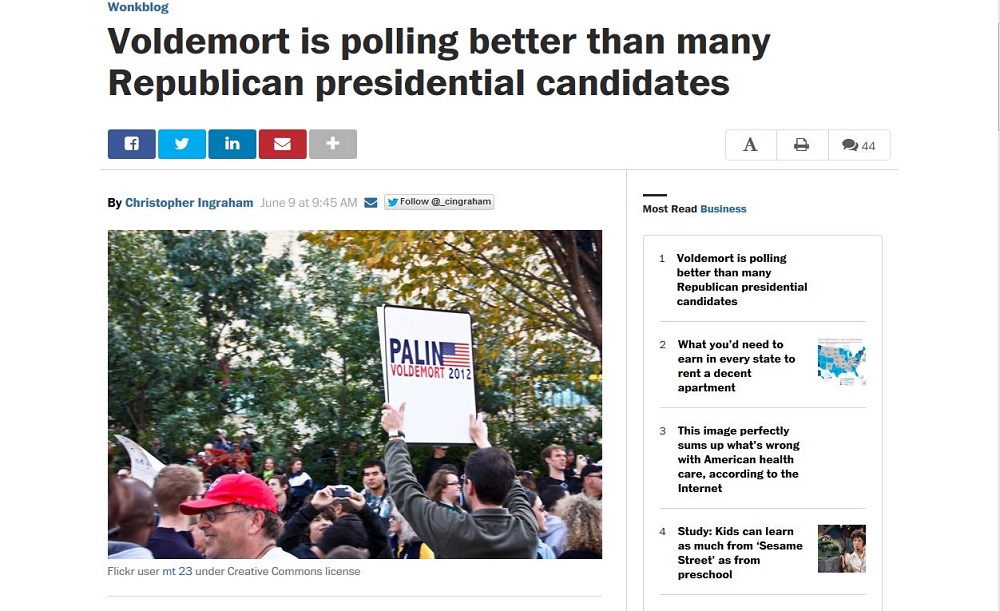 The editorial page editors at the New York Times posted a Tuesday item on their blog that shamelessly played up how the main villain from the Harry Potter book series, Voldemort, has a "higher rating than six Republicans, including Jeb Bush." Their Twitter account further hyped that "Voldemort polls better than six Republican presidential hopefuls, including Jeb Bush."

The unsigned online article, "Voldemort Is More Popular Than Jeb Bush," first noted that "The Terminator, Darth Vader and the shark from 'Jaws' all have higher favorability ratings than any of thirteen candidates and likely candidates for president. And Voldemort has a higher rating than six Republicans, including Jeb Bush." The anonymous writer cited a Tuesday post on the Washington Post's WonkBlog by Christopher Ingraham, who "compared polling data on the presidential hopefuls with Google Consumer Survey results on the fictional characters."

Ingraham's article included a picture from the Flickr photo hosting website of a protester holding a sign that read "Palin/Valdemort 2012" (see above). He jokingly led by asking, "Think about all the things you look for in a presidential candidate: a solid economic plan. Maybe some foreign policy experience. And how about insatiable bloodlust and multiple rows of serrated teeth?" He continued that "it turns out, the shark from the Jaws movies has better favorability numbers than any politician included in the latest Washington Post-ABC News survey. Ditto for The Terminator. Same for Darth Vader.."

The Washington Post reporter outlined that "the real-world surveys show that the overwhelming majority of presidential candidates are running negative favorability scores. Quinnipiac has Bernie Sanders at +1 overall, although that's partly because 62 percent of Americans say they haven't heard enough about him to form an opinion. The closest Republican is Marco Rubio -- the same number of Americans say they view him positively as those who view him negatively, meaning his score nets out to exactly zero."

Later in the article, Ingraham disclosed that "one of the villains -- Voldemort...has a lower favorability rating than some of the candidates. You'll recall that Voldemort killed Harry Potter's parents, fed his enemies to a giant snake, and tortured and killed muggles just for fun. But he's still polling better than Mike Huckabee, Ted Cruz, Jeb Bush, Rick Santorum, Chris Christie and Donald Trump." He concluded with a snark targeted at the Republican presidential field:

The GOP field has become so large and unwieldy that Fox News is only allowing 10 candidates to participate in the first debate to be held this August. Fox could make things simpler by narrowing the field even further, allowing only the candidates who are currently polling better than Lord Voldemort.

After all: how are you going to defeat ISIS on the battleground if you can't beat a fictional wizard without a nose?