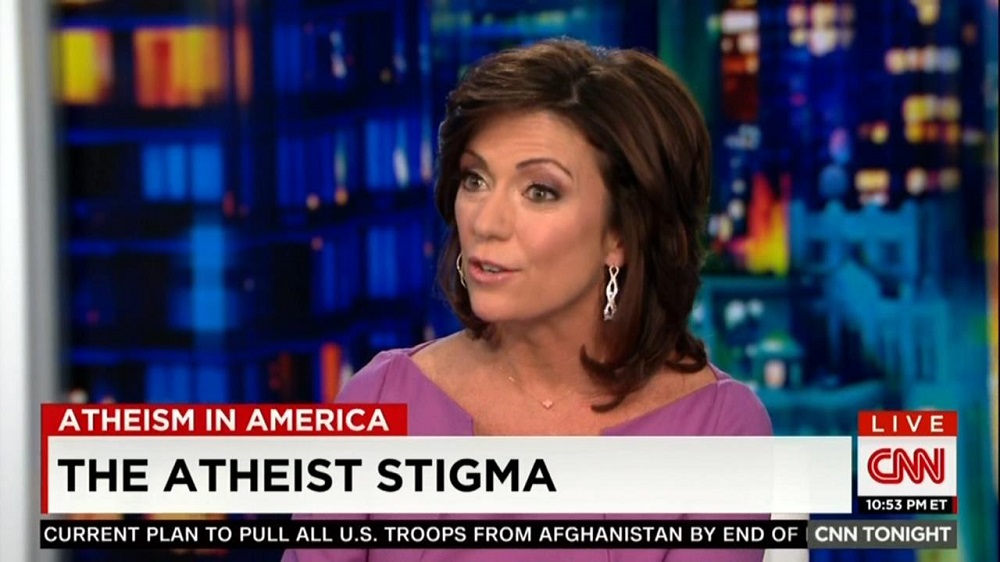 Kyra Phillips promoted her upcoming documentary on atheism on Tuesday's CNN Tonight by asserting that "there's such a stigma on that word 'atheist.' People think devil worshiper – no moral compass." Phillips underlined how "there was a time where they just used the word 'atheist.' And now, you are hearing 'humanist,' 'nons,' 'skeptics,' 'free-thinkers.'..this is all the same thing. These are people that don't believe in God. They're just scared to say the word." [video below]

The correspondent later pointed out that "a lot of these atheists compare themselves to gay and lesbian – saying, it's just like that. It's living in the closet – not able to be my real self – and it's torturous."

Anchor Don Lemon led the segment with Phillips by asking, "Explain to us what this looks like – what atheism look like now in America, and why it's so controversial." She replied with her "scared to say the word" claim, and soon followed with her "stigma" term. Lemon then asked her about a Christian preacher turned atheist she had interviewed. After dropping her "gay and lesbian" comparison, the liberal journalist played an excerpt from her special, Atheists: Inside The World of Non-Believers, which featured the former pastor:

PHILLIPS: And made the hardest choice in his life.

PHILLIPS: The news that DeWitt had become an atheist sent shock waves through the community, and the fallout was like a punch to the gut.

PHILLIPS (on-camera): You lost it all-

PHILLIPS: Your job, your congregation – your wife left. You lost all your money. So, why stay here in Louisiana? Why not go somewhere that's more progressive – open-minded?

PHILLIPS (live): And you go into his church, and you feel like you're in church. But instead of, 'can I get an Amen;' he says, 'Can I get a Darwin?' (Lemon laughs)

Phillips added that she had "talked to preachers who don't have the guts to come out – and they're preaching every Sunday, and their congregation doesn't know that they don't believe," and pointed out that "there's something called 'The Clergy Project.' More than 600 leaders in the faith community are struggling with the fact that they are preaching what they don't believe – in God. And we talked to one of those preachers."