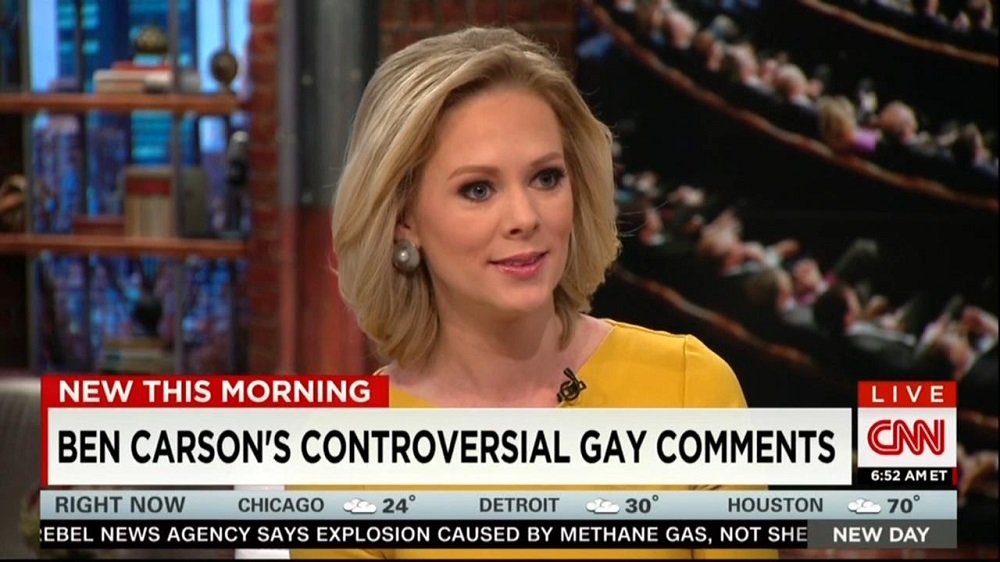 Socially liberal Republican consultant Margaret Hoover went on a tear against Dr. Ben Carson on Wednesday's New Day on CNN for his remarks earlier in the program on same-sex "marriage." Hoover twice attacked the potential Republican presidential candidate as "untethered to reality," due to his views on homosexuality, and for his apparent audacity to even consider running for the top federal office. She added that "this sinks any nomination" for Carson. [video below]

Anchor Chris Cuomo responded to her rant against the Republican physician by noting that his guest was "very defensive about this." This led the descendant of President Herbert Hoover to admit, "In my spare time, I run a gay rights organization." The liberal anchor, who himself acted as a LGBT activist during his interview of Carson, unsurprisingly replied, "I applaud the work."

Cuomo and co-anchor Alisyn Camerota turned to Hoover and her husband, The Daily Beast's John Avlon, for their take on the Dr. Carson interview. Avlon, who shares his spouse's social liberalism, first gave a snarky reply to the segment, which aired less than an hour earlier:

JOHN AVLON, EDITOR-IN-CHIEF, THE DAILY BEAST: If there's one thing we like, it's when a presidential candidate surmises about prison and gayness. I think that, right there, is a really good, important qualification for the office. He lost no opportunity to jump right on that. Well done, Ben Carson.

Hoover then interjected, "It's hard to give a serious analysis of this," and continued with her first "untethered to reality" line against Carson. She also cited her presidential ancestor as she went on the offensive against the Republican figure:

MARGARET HOOVER, REPUBLICAN CONSULTANT: ...[I]t's hard to give a serious analysis of this. But the truth is, we know Ben Carson is sort of untethered to reality anyway. No person – citizen has run for the U.S. presidency, not having served any other elected office – except for Herbert Hoover, by the way....and he had been in the Cabinet for 12 years, and he had been an international war hero – all these other things. So, there's no way he was going to be elected to the presidency anyway. But this!...But – but this just demonstrates – I mean, first of all, there's no data on this. Secondly, this sinks any nomination. If he has looked at any of the polling about where American attitudes are about homosexuality-

The liberal anchor interrupted his guest and asked, "But you don't think there's a significant part of his party's base that believes the same thing? Do you think Ben Carson is the only person who believes this?" Hoover answered by pointing to her apparent expertise as a consultant, and dropped her second "untethered to reality" jab at Dr. Carson:

HOOVER: His party, by the way, is my party. I am intimately familiar with the Republican base. Fifty percent of Republicans under the age of 50 are in favor of freedom to marry-

AVLON: Wahoo! Fired up there, babe!

CUOMO: What about the other 50?

ALISYN CAMEROTA: Why doesn't Ben Carson know about that?

HOOVER: Again, untethered to reality – I refer you to my earlier statement. I just – I think that he is not a savvy political candidate. He has been an incredible orator of the American dream and his personal story, and that is – that is really compelling, and it has sold him a lot of books-

HOOVER: But it's not going win him the presidency.

Before they moved on to the emerging Hillary Clinton e-mail controversy, Cuomo did push back against his guest's assertions about Republican primary politics. Hoover pointed to the most recent Iowa Caucuses as her proof:

CUOMO: I think that Ben Carson isn't saying this because he thinks it will be unpopular. I think he is saying it because he actually believes it, and I don't think he's alone in that belief. I think you're making the party seem more progressive-

AVLON: I think this may not be the campaign manifesto he expected to roll out. I think he's probably regretting that comment.

HOOVER: That's not – I'm not making the party more progressive-

CUOMO: Ironically, he just said before that, I've learned my lessons – I'm toning it down now.

AVLON: That didn't quite work. It takes – it takes a while to break habits like that, though.

HOOVER: Well, let's – let's just take Iowa for example. Who won Iowa last time? Rick Santorum, after – after Mitt Romney did it. The Iowa caucus-goers are actually half and half. They're half Christian conservative, and half mainstream moderates. The Republican primary is not over-dominated by people who think gay people aren't – shouldn't deserve full freedom and equality in this country. It's just not. That is a media meme. That's a political consultant meme. That is not – stack up against the data.

CUOMO: I see you're very defensive about this, Margaret. I understand why.

HOOVER: In my spare time, I run a gay rights organization. (laughs)

CUOMO: I know! I know you're not just ticking off all in your head. And look, I applaud the work.