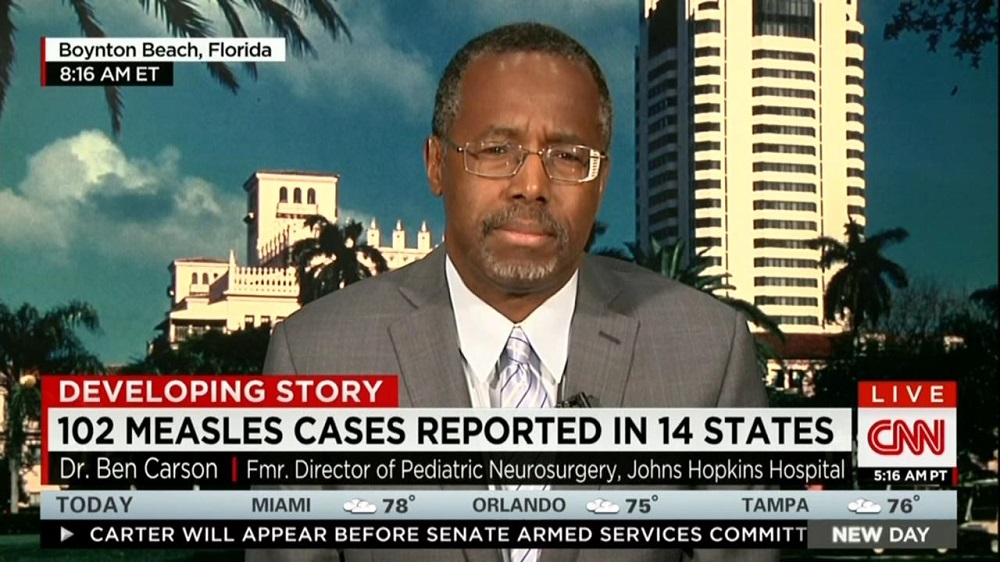 CNN's Chris Cuomo forwarded the latest liberal attack on conservatives/Republicans on Wednesday's New Day as he interviewed potential GOP presidential candidate, Dr. Ben Carson. Cuomo hounded the neurosurgeon on the ongoing measles outbreak, and asserted that "this has been politicized now. You see a couple of your potential opponents coming out – and it seems as though the Republican Party has a problem with science – that they're always pushing back against science."

Dr. Carson pushed back against the anchor's slanted line of questioning: [video below]

DR. BEN CARSON, FMR. DIRECTOR OF PEDIATRIC NEUROSURGERY, JOHN HOPKINS HOSPITAL: Well, first of all, I have to challenge the – the premise of your question-

CARSON: Because in California, the majority of the cases are coming from Democratic strongholds. So I'm not sure that I would characterize it as a problem with one party or the other. But I would characterize it as a problem of lack of information about – you know, modern studies. And I understand that there are some people who are petrified of autism, and things that were thought to be associated with these vaccinations. But it's been proven that it's not. We just need to update their data.

Cuomo may need to DVR his own network's programs, as liberal New York Times columnist Frank Bruni actually contended on Monday's CNN Tonight that the anti-vaccine movement is more of a phenomenon of the left: "I think a lot of the anti-vaccine people probably would hate to hear themselves lumped in with the climate change deniers. But they're doing the same thing from different places on the political spectrum."

The CNN anchor led into the measles/vaccination issue by asking if he had his children vaccinated and for his opinion about what was behind the resurgence of the disease:

CUOMO: Let's get to the measles – talking about safety. This is certainly a specific U.S. concern. Just a couple of quick, simple questions: did you have your boys vaccinated?

CUOMO: Do you think, as a doctor, are you aware of anything – a doctor, a surgeon – you work with kids specifically – that makes you think that vaccines may be more of a risk than a reward?

CARSON: No. I think the benefit-to-risk ratio is far in favor of vaccinations. I do understand that there had been some questionable information out there a few years ago. But I think that's been largely put to rest.

CUOMO: Do you believe that what we're seeing with measles coming back again is because of noncompliance by families with their kids and vaccines?

CARSON: A combination of noncompliance and introduction into our society of people who, perhaps, haven't been well-screened.

After making his biased "problem with science" statement, Cuomo continued badgering his guest by bringing in another controversial issue – illegal immigration:

CUOMO: Understood. I'm not saying that Republicans are getting sick more. I'm saying that they're talking about the sickness more in ways that may not be productive. For example, what you say about, well, maybe people being introduced. That sounds like code for illegal immigration to me. Is that a point you're trying to make? Are you trying to make the measles situation into an immigration argument?

CARSON: It's not code, and I'm not trying to make it into any particular argument. I'm stating what the facts are. The facts are there are people in our country-

CARSON: Who have been lax, in terms of their vigilance of getting their kids immunized; and we have people coming in who are not necessarily being properly screened. That's not making any issue. That's stating facts.

CUOMO: Well, do we know that it's a fact? Do we know that any of the cases are from people who came into the country illegally and didn't have their kids vaccinated?

CARSON: Let me put it this way: if I found you somebody who came in from another country who had not been vaccinated and caused a problem, would that convince you?

CUOMO: Yes, as much as you would want to value-

CARSON: No, it would not.

CUOMO: No, of course. You want the – you want the supposition to have something behind it other than something that can – you know, just prejudice people against immigrants. So, of course, it would give some validity to it. That's why I'm surprised you'd say that without that in your pocket.

CARSON: It's not to prejudice anybody. But we have to deal with reality. And if you have people coming into your country who have not been properly screened; who have not had the same kind of care as the people in this country; I don't think you have to be a genius to figure out that that could introduce some communicable problems.