On Monday, President Joe Biden took part in a CNN Town Hall and while Univision and Telemundo covered the event, showing the same two edited segments of the Q&A session in all their newscasts and leaving out the most relevant moment for their audiences: when Biden called Latinos (and Black) ignorant.

Watch this clip from the Town Hall that both Univision and Telemundo HID from their viewers, and where Joe Biden unabashedly says, "Not everybody in the community, in the Hispanic and the African-American community....know how to get online to determine how to get in line for that COVID vaccination.”

Not everybody in the community, in the Hispanic and the African-American community, particularly in rural areas that are distant and, or inner-city districts know how to use, know how to get online to determine how to get in line for that COVID vaccination at the Walgreens. 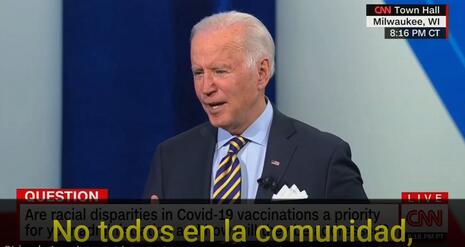 Instead, the Telemundo and Univision audiences got to see two convenient segments of the town hall: one in which Biden tells a Hispanic girl that she has a "beautiful" name and assures her that she does not have to be afraid of COVID (?); and another one where he says- about immigration -- that everyone deserves to be treated with dignity and he considers a path to citizenship to be key in immigration reform.

With his racist comment, the president confirmed to millions of Americans that for him, Hispanics and Blacks are not smart enough to access the internet and make an appointment to get vaccinated against COVID-19. His insult was in response to a question about what his administration planned to do to address racial disparity in virus infection rates. R: Make fun of Latinos and African-Americans.

Bias cannot be more evident in the nation's liberal media: anything that results in more audiences and profits deserves to go on the air. Everything else goes to the dumpster.