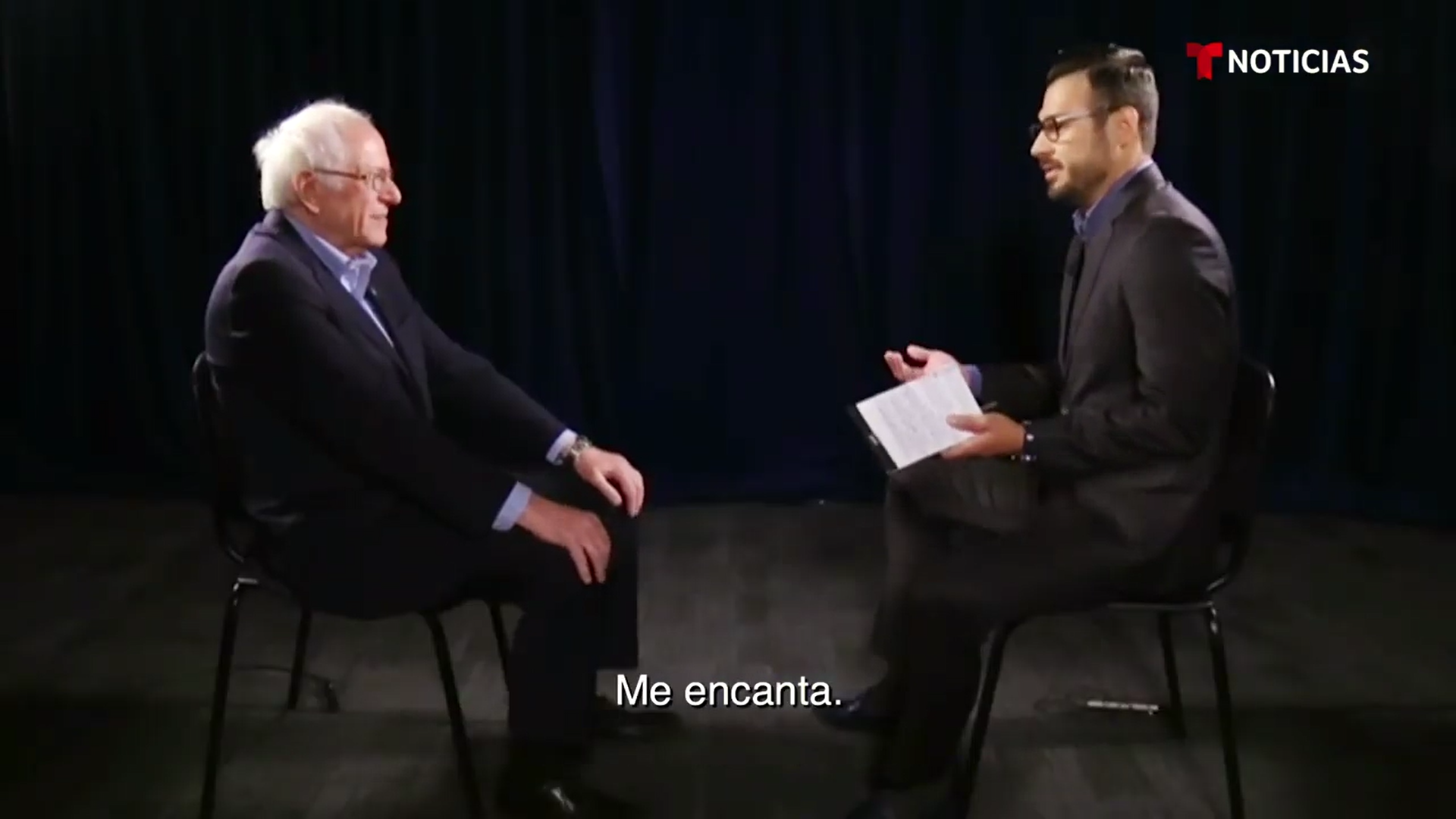 Senator Bernie Sanders’s rise to Democratic primary frontrunner, fueled by significant Latino support en route to a smashing victory in the Nevada caucuses, prompts an examination of the role that the nation’s leading Spanish-language networks have had therein.

There were two significant things the network newscasts did to pave the way for Sanders. The first was to sharply increase their leftward bias while intensifying their advocacy coverage of immigration issues and policies.

Our five-year study showed an increase in stories with a left-leaning tilt, from 45% in 2014, to 70.2% in 2019. Additionally, immigration is now dominant to the point of overwhelming other stories. Our February 2020 study showed that Univision and Telemundo devoted a combined three hours and 14 minutes to immigration, compared to 40 seconds on the explosive economic growth and record jobs numbers within the Hispanic community.

Much of the immigration coverage is seemingly centered on grievance. Watch this emblematic clip, which shows how Univision anchor Patricia Janiot introduced a story on Mike Bloomberg’s Spanish-language ad campaign:

In an attempt to court the vote of the growing Latino electorate, Democratic presidential primary candidate Michael Bloomberg launched his first Spanish-language television ad. In the video, Bloomberg, the grandson of immigrants, highlights precisely how important it is for immigrants that Trump be defeated, after implementing tough policies against OUR community.

The second thing the networks did was to utterly fail to examine Sanders’ record of sympathy towards communist regimes, particularly in Latin America, while whitewashing “democratic socialism” for domestic consumption by Hispanic viewers. Bernie Sanders hasn’t faced anything close to a tough question since his bumpy 2016 interview with Univision Los Angeles anchor León Krauze.

Nowadays, interviews on Spanish-langage media consist of someone reluctantly and apologetically asking Sanders to explain how his brand of "democratic socialism" is totally not like that of Venezuela or Cuba. Watch below for that portion of Telemundo correspondent Guadalupe Venegas' sit-down with Sanders (click “expand” to view full transcript):

VENEGAS: During the debate, there was a point where you looked visibly upset when Bloomberg said your policies were those of communism governments, not socialism. What was going through your head when you answered?

SANDERS: Well, it’s the same old ugly red-baiting that goes on. I think most Americans understand that democratic socialism is not communism. What we’re talking about are policies that exist in Canada- policies that exist in Germany, Sweden, Denmark, France, Finland...uh, countries all over the world. Guaranteeing healthcare to all people is a human right, is not “a communist idea”.

SANDERS: In fact, we are the only major country on Earth not to do that. Making sure that all of our kids get a good education and that you don’t have to go deeply into debt when you go to college is not “a communist idea”. So, you know, it’s another example of red-baiting, it’s from people who are desperate- who cannot debate the issues.

VENEGAS: Now, we have a lot of Hispanic viewers who, when they think of socialism...now, I’ve been to Denmark. Beautiful country. I love it. You get paid to go to college- everything’s great, right? But when you ask Hispanic viewers, Hispanic voters...socialism makes them think of Nicaragua, Cuba, Venezuela, where things are not well.

VENEGAS: So are we talking about two different types of socialism? What do you tell these voters?

VENEGAS: Which, sorry to interrupt you, you don’t support those governments…

SANDERS: Of course I don’t support those! I have, my entire life, been fighting authoritarianism whether it is communism, whether it is fascism- whatever it may be.

And, of course, there was Jorge Ramos’ own blatant whitewashing of democratic socialism and dismissal of comparisons to Cuba, Venezuela, or Nicaragua (click “expand” to view full transcript”):

So what, exactly, is democratic socialism? It’s the idea that democracy and the economy work best when there is a strong social safety net- one that provides people with universal access to education and healthcare, one that protects workers and the environment. Democratic socialism believes that people can participate best in a democracy when their basic needs are taken care of. Democratic socialism is different from traditional socialism. Traditional socialism calls for a state-run economy with no free-market capitalism. In practice, traditional socialism often ends in authoritarian disaster. Think of Cuba, Venezuela, Nicaragua, and North Korea. They all call themselves “socialist countries”. This is what older generations think of when they hear the word “socialism”: poverty, repression, and lack of individual freedoms. But younger generations tend to think of socialism as a system of basic guarantees, protections, and rights for all workers, children, the elderly, and the environment. Most democratic socialists aren’t advocating for a government takeover. They simply want a level playing field for everyone to succeed.

As you examine Sanders’ success among Hispanics in the Southwest and West (so places where Spanish-language media’s footprint is the largest), it becomes clear that the networks had a clear role in his rise to popularity.

Their failure to scrutinize Sanders’ record of affinity for communist regimes in Latin America have a direct correlation with Sanders’s support within the community, and constitute a grotesque dereliction of duty.