Jorge Ramos: U.S. Is 'Our Country, Not Theirs'

Further ramping up his open opposition to President Trump's immigration law enforcement policies, Univision anchor Jorge Ramos has let loose with an outrageous tirade that could best be described as equal parts nationalistic identity politics, racially-driven demagoguery, and yet another instance of the irresponsible conflation of legal and illegal immigration.

Here's how the Univision/Fusion anchor kicked off his participation in the 2017 edition of the network's annual entertainment awards show, Premios Lo Nuestro ("Our Awards"):

JORGE RAMOS, SENIOR NEWS ANCHOR, UNIVISION: I am an immigrant, just like many of you. I am a proud Latino immigrant here in the United States. My name is Jorge Ramos, and I work at Univision and at the Fusion network. And you know exactly what is going on here in the United States. There are many people who do not want us to be here, and who want to create a wall in order to separate us. But you know what? This is also our country. Let me repeat this: OUR country, not theirs. It is our country. And we are not going to leave. We are nearly 60 million Latinos in the United States. And thanks to US, the United States eats, grows and, as we've seen today, sings and dances. So when they attack us, we already know what we are going to do. We are not going to sit down. We will not shut up. And we will not leave. That is what we are going to do.

Premios Lo Nuestro is usually just a nice bit of entertainment for fans of the many different genres of Latin music...not unlike the Billboards or the CMAs. However, as we saw during last year's pre-election RiseUp concert and GOTV rally, Univision is increasingly mixing politics and entertainment - and that's how we end up with Ramos as a presenter at a music awards show.

Ramos' speech is amazingly strident, with an "us against them" tone that one would not expect from someone who incessantly promotes diversity from the other side of his mouth. When Ramos told the audience that "there are many who do not want us to be here", he erases any distinction between legal and illegal immigration, and irresponsibly casts immigration as an exclusively Latino issue. This is not the first time Ramos has drawn on both deceptive and discredited rhetorical devices such as these. 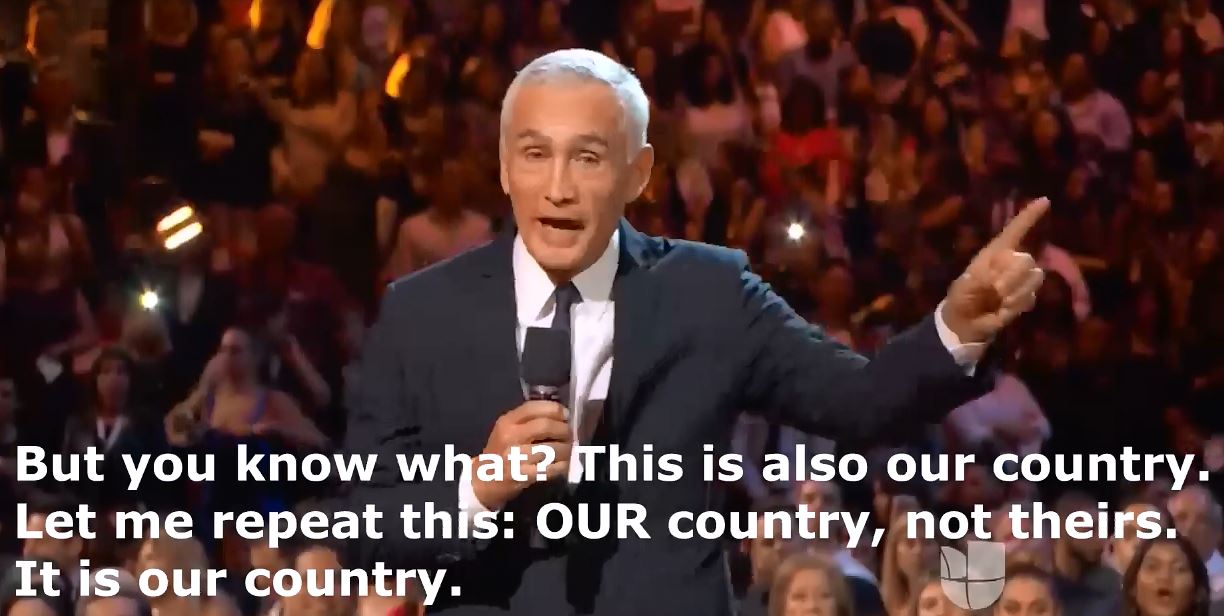 What is astounding, though, is Ramos' ferociously nationalistic rhetoric. On this score, Ramos would have been in the clear had he stopped at "this is also our country". Such a statement hints at inclusion, patriotism, and a pro-forma desire to assimilate and function as an integral part of the nation as a whole. However, Ramos crossed a bright line when he decreed the United States to be "OUR country, not theirs". One does not expect to hear such nationalistic rhetoric from a hardened critic of Donald Trump and Steve Bannon, and yet this isn't the first time that a Univision anchor lets loose with a nationalist rant. Who can forget Ramos' co-anchor María Elena Salinas' remarks, when she went nuclear after Ramos' 2015 Iowa press conference incident?

Jorge wanted a piece of Trump ever since that first speech where he announced his candidacy and said that Mexico sends criminals, drug traffickers and rapists over the border. In reality, most of us that work in Spanish-language media have wanted a piece of him (Trump), have wanted to question him and challenge him and show him that his statements are baseless. Moreover, that his words are the equivalent of a declaration of war against an important sector of American society. As in any war, an aggression against one of our own brings pride and nationalism to the surface. Insult Hispanic immigrants, with or without papers, and you insult all of us Hispanics. They are not alone.

Univision would like English-language audiences to think that Ramos didn't actually say what he said. The network deceptively softened the most incendiary portion of Ramos' "bold statement" when it translated it for consumption by English-speaking audiences. "OUR country, not theirs" magically became "OUR country, not just theirs". Univision also disappeared that part of his statement from a related meme.

Finally, Ramos' statement begs the question: Who is this "our" that he speaks of? Is it U.S. Latinos regardless of birthplace? Legal immigrants? Illegal immigrants? Supporters of comprehensive immigration reform? Is it the multiracial and multicultural "rising American mainstream"? That much isn't clear. What IS clear is that "Our", within the context of Ramos' statement, suggests a separate nationality to which U.S. Hispanics owe some sort of allegiance. Ramos, of all people, should know better than to approach the lines of racial and cultural supremacism - even if it is in furtherance of an amnesty cause that is near and dear to him.

He STILL doesn't represent me.