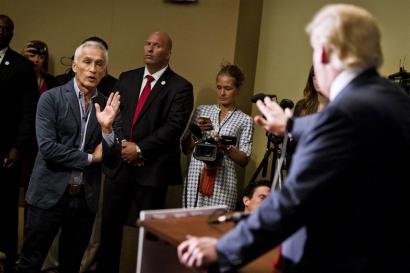 2016 is the election season in which Univision/Fusion anchor Jorge Ramos finally dispensed with journalistic pretense and engaged in full-on activism, going so far as to cast judgment upon those who may disagree with him. But as the election draws to a close, it is Ramos who may face judgment...delivered from his very own words.

Recall that Ramos penned an incendiary column for Time magazine just a few months ago, titled "Judgment Day Is Coming for Those Who Stay Silent On Trump". The column is built upon Ramos' thematic (and theatric) predicate for the cycle, which is that journalists are compelled to take a stand against "racism, discrimination, corruption, public lies, human rights abuses and dictatorships". Specifically, these are the reasons that Ramos has cited in opposition to the candidacy of Donald Trump from the outset of his candidacy.

But over the course of the last 16-plus months, we noticed that Ramos' curiosities and judgments veered in one direction. We pointed out that Ramos was not as interested in covering the scandals surrounding either the Clinton Foundation or Hillary Clinton's private e-mail server. Here's what we said back in July:

The network's star anchor has billed himself as someone unafraid to ask the toughest questions of the most famous and powerful. In fact, he leveraged that reputation into notoriety, establishment-media celebrity status, and a even book in the wake of his staged harangue of Donald Trump.

But when Hillary Clinton's email scandal came to a head, and former President Bill Clinton held that highly innapropriate meeting with Attorney General Loretta Lynch just days before FBI Director James Comey gave that stunning press conference in which he outlined the ways in which Clinton and her aides ran afoul of the law right before absolving her, Ramos was nowhere to be found.

Fast-forward to this weekend and news of the explosive letter that Comey sent to Congress announcing the discovery of additional emails related to the investigation. As we mentioned over the weekend, the reopening of the investigation forced Univision into covering the story with more detail than "woe is Brave Hillary who can't seem to shake these emails" (something that I half-jokingly predicted would happen back in May of 2015). Is there any chance that Ramos would follow suit?

Nah. Instead, Ramos chooses to follow the establishment media and academic left in condemning and pressuring FBI Director James Comey, as seen via this retweet of Professor Jeff Jarvis of the CUNY Graduate School of Journalism. After completely disappearing during the Comey announcement, it appears that Ramos will join the partisans maligning the decision to reopen.

The reopening of the Clinton email investigation provided a golden opportunity for Ramos to "take a stand" against the shockingly obvious "corruption and public lies" on display here. Such a stand would have been a clear departure against the indifference that Ramos has shown this story so far, aside from the pro-forma questions now directed at Clinton surrogates after months of scandal. Ramos still can't be bothered to write an opinion piece on the matter, unlike the many barrels of ink spilled against Donald Trump.

But I would caution Ramos that history will judge those who remained silent as Hillary Clinton's corruption and public lies spill out into public view -yet again- just days before a presidential election. I would remind Ramos that if there is a clear pattern of corrupt behavior- or suspicion of criminal conduct as described by Director Comey in his July remarks- that "we cannot hide in the principle of neutrality", because "...when it comes to racism, discrimination, corruption, public lies, dictatorships and the violation of human rights, we have to take a stand."

In fact, I would strongly urge Jorge Ramos to go back and read every last one of his own words in that Time column. I would then urge him to let those words guide him as he covers the Clinton email scandal going forward.

History will remember, and we'll be watching. Judge not, lest ye be judged.