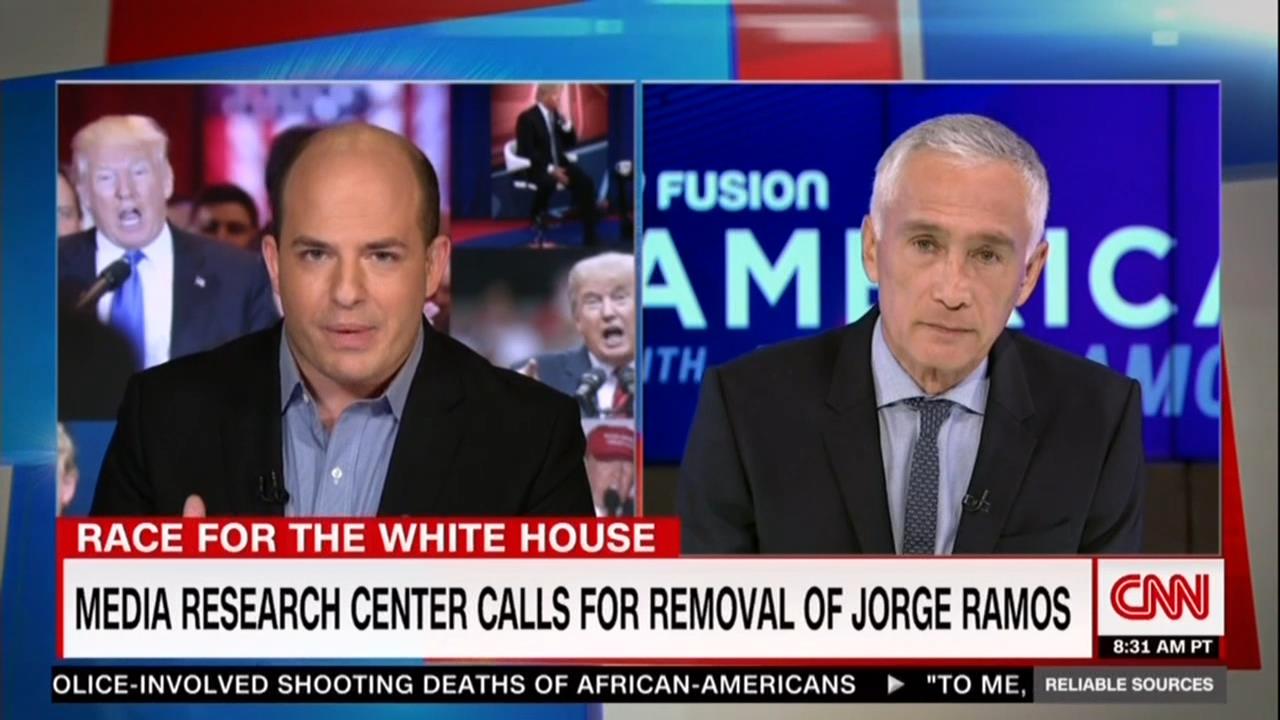 Univision/Fusion anchor Jorge Ramos joins Brian Stelter on today's edition of Reliable Sources, in order to discuss the controversy surrounding Ramos' incendiary column for Time magazine, which led to the MRC's call for his removal from the Univision anchor desk until after the election. Here's what to expect:

"Racism, Discrimination, Corruption, Public Lies, Dictatorships, and Human Rights Violations": In Ramos' own words, these are the things against which journalists must abandon neutrality and take a stand - the professed basis for his visceral public opposition to Donald Trump. But in the preview segment making the rounds on social media, we see a fascinating exchange that leaves Ramos exposed.

After Ramos compares Trumpism to McCarthyism as a unique phenomenon in American politics that require journalists to take a stand, Stelter cites portions of the Time column, and then proceeds to ask a million-dollar question:

"Why is that not also equally true with regards to coverage of Hillary Clinton? Why do you think Trump is different from Clinton in that regard?"

Does Ramos give greater weight to any of the items on his Big Six list, or are all equally abhorrent? Do some of these things allow for selective neutrality as opposed to total abandonment of neutrality? Read Ramos' response, and judge for yourselves:

"Well, I think Donald Trump is different, because no candidate in this election has attacked Latinos, immigrants, Muslims, women, people with disabilities, and war heroes.

On the other hand, and I have to say that, and it is very important, I've been really, very tough also on Democrats. I asked Hillary Clinton in the Democratic debate about emails and Benghazi. This morning I spoke with Tim Kaine and I asked him about the possible conflict of interest in the Clinton Foundation and also about their emails. I criticized President Barack Obama's policies on immigration, so in other words, yes, I'm holding Donald Trump accountable. But at the same time, I've been as tough- and Univision and Fusion have been as tough with Democrats."

To the latter point I say, nuh-uh.

We've documented Ramos' softness on Hillary Clinton here, here, and here. Oh, don't get me wrong- you'd best believe that Jorge Ramos will absolutely hold you accountable for corruption and public lies...if you're the president of Mexico.

Ramos has spilled barrels of opinion-column ink over each of President Enrique Peña Nieto's scandals, and they have received intense coverage on Al Punto as well as Univision's newscasts. The same can not be said, however, with regard to the cloud of scandal that continuously surrounds Hillary Clinton the way dirt surrounds Pigpen from the old Peanuts strips.

These have not warranted any opinion column from Jorge Ramos, and they have not earned barrages of tweets. When it comes to this particular instance of corruption and public lies, taking a stand appears to be something optional, and both his own words and his body of work prove it.

Stelter mentioned that he was going to address the MRC's call for Ramos' removal from the anchor chair. Expect a response with some variation of "Conservatives want to silence me and I won't be silenced"- a classic Ramos talking point. Rather than repeat myself, here's what I said when Ramos tried to pull that nonsense last year:

Most egregiously, Ramos had the audacity to complain that conservatives want to SILENCE him as a result of his biased coverage. Such a statement can only be attributed to the sort of hubris that results from privilege and attention, given his provenance from a place where journalists are literally silenced.

No journalist that encourages activism, abandons neutrality, and routinely spits out partisan talking points should expect to go unchallenged - not even the so-called Next Cronkite. That Ramos should chafe at this slightest bit of pushback suggests that the afflictor has indeed grown quite comfortable, and is now the power that needs to hear truth.

A year has passed since Ramos managed to get himself tossed from Trump's Iowa press conference. Both last week's Time column and subsequent Reliable Sources interview seem to indicate that not much has changed since then.

The bottom line is that despite his own rhetoric, Jorge Ramos has decided to give greater weight to the personal prosecution of racial grievance than to exposing Univision's viewers to public lies and corruption here at home.