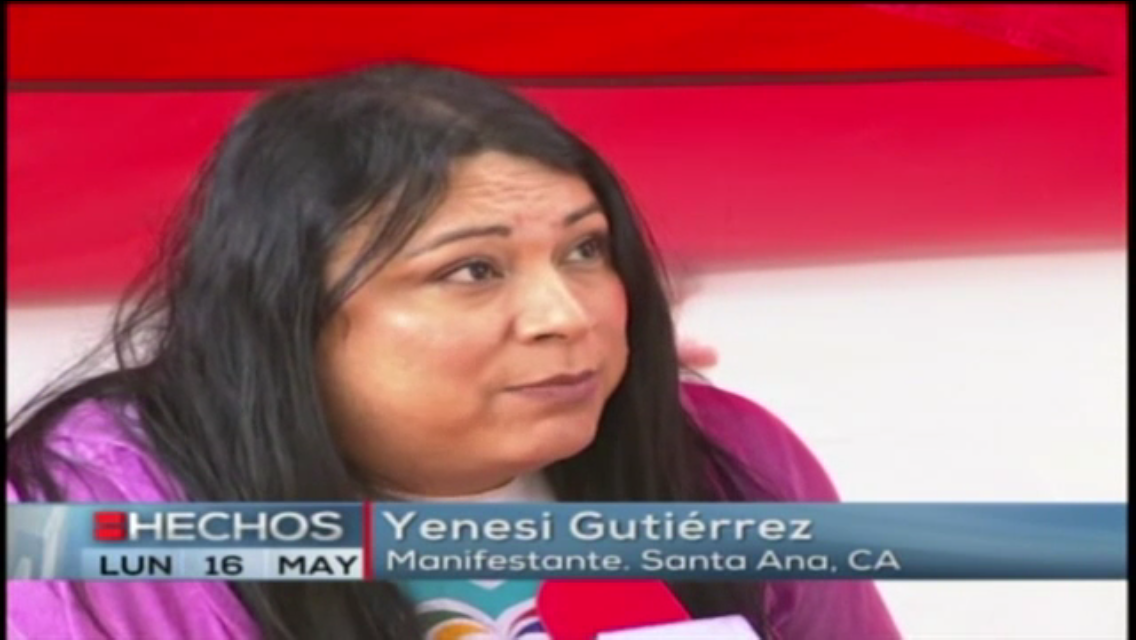 The Azteca America network continues to try to outdo its competition in the U.S. Spanish-language media segment, in terms of the most insanely biased coverage of the immigration agenda. Here's your latest installment, a confirmation of something I learned in art class many years ago - that empty spaces can also tell a story.

The Orange County Register  recently reported that the city of Santa Ana, California is under fire for its participation in a controversial program, in which the city has agreed to house gay, bisexual, and transgender individuals detained by Immigration and Customs Enforcement (ICE).

The pilot program is based on a Transgender Care Memorandum for ICE personnel, a “progressive program to humanely house the gay, bisexual and transgender community,” according to Virginia Kice, an ICE spokeswoman.

Santa Ana bills ICE $105 per detainee per day for its participation in this "progressive program" (It should ne noted that OCR reporter Jessica Kwong manages a spectacular bit of wordsmithing by managing to write a column on ICE detentions without ever alluding to the immigration status of the detainees. But I digress). The program is set to run through 2020, which represents a nice bit of revenue for the city (roughly $4.9 million/year if my math is correct), and almost enough to pay off the jail facility's debt.

MARIA ELENA GARCIA VILLALOBOS, AZTECA AMERICA REPORTER: It is a (hunger) strike for Justice and Liberty.

JORGE GUTIERREZ, PROTESTER: We want...we demand that the Santa Ana City Council cancel the contract it has with ICE as soon as possible. And so we are here to demand, um...that the Council stand with the community, and this is what the community wants.

Azteca America, for some reason unbeknownst to us, saw fit to omit all these details from its coverage of the hunger strike. I choose not to speculate as to why Azteca America whitewashed the LGBT angle from the Santa Ana story, as it was materially relevant to the facts of the story, namely, the ICE pilot program that is at the heart of the featured protests. However, I will note that such behavior is consistent with a practice engaged by much of our domestic Spanish-language media, namely, the attempted infantilization of its audience in order to push an open-borders agenda.

It is beyond interesting that the most prominently featured protester in the Azteca America report is trans rights activist Jennicet Gutiérrez (not Yenesi as depicted in the feature image), best known for heckling President Obama last year. Ironically, it has been speculated that Gutiérrez' protests are what led, in part, to the creation of the ICE pilot program now protested by...Gutiérrez.

The story itself is a master class in media bias. The reporter is blatantly on the side of the protesters, adding sympathetic voice-overs to the protesters' narrative. There is no one available to explain the detainer program or defend it as a source of income for the city. There seem to be no two sides to this story whatsoever. The report then closes out with a shout-out to the network's "Protect Yourself, Citizenship Now!" campaign.

So biased is the story that no little pullquote could ever do it justice. Here's a full (translated) transcript:

ROBERTO RUIZ, AZTECA AMERICA ANCHOR: Meanwhile, a city with a large immigrant population has made a financial deal with ICE in order to house hundreds of undocumented (immigrants) at its jail. My colleague María Elena García Villalobos has that information.

MARIA ELENA GARCIA VILLALOBOS, AZTECA AMERICA REPORTER: It is a (hunger) strike for Justice and Liberty.

JORGE GUTIERREZ, PROTESTER: We want...we are demanding that the Santa Ana City Council cancel the contract it has with ICE as soon as possible. And so we are here to demand, um...that the Council stand with the community, and this is what the community wants.

MARIA ELENA GARCIA VILLALOBOS, AZTECA AMERICA REPORTER: Thing is, the City of Santa Ana receives $105 dollars per day for each immigrant housed within its jail. And so the peaceful protest is (in order) to prevent them (the city) from profitting off of the undocumented.

JORGE GUTIERREZ, PROTESTER: This means that we'll be here, only drinking water, but feeding off of the energy and the commitment that we have to our community.

MARIA ELENA GARCIA VILLALOBOS, AZTECA AMERICA REPORTER: The fear is that the situation may worsen with the announcement of the upcoming raids and the current anti-immigrant environment.

JENNICET GUTIERREZ, TRANS RIGHTS ACTIVIST: I am currently undocumented, the fact (that I am) driving without a license, I always have that fear...My mom always tells me, "be careful, don't get in trouble with the law because they can always check your immigration information and place you in a detention center. And so, um, that's the fear that (they) don't have...it seems unjust to me that this nation which values so many rights, that they are terrorizing our communities and make us...are making us live in fear. That is, um...intolerable.

MARIA ELENA GARCIA VILLALOBOS, AZTECA AMERICA REPORTER: Tomorrow, (on) Thursday, the City Council will be asked to commit to have a vote within fifteen days in order to end its contracts with ICE, and (a decision) to end the hunger strike will depend on that. In Santa Ana, María Elena García Villalobos, Azteca Noticias. And remember: "Protect Yourself. Citizenship Now!"