The Washington Post cheered a reported ban of a gamer who made  a pro-America modification that offended the rainbow-praising Big Tech overlords. 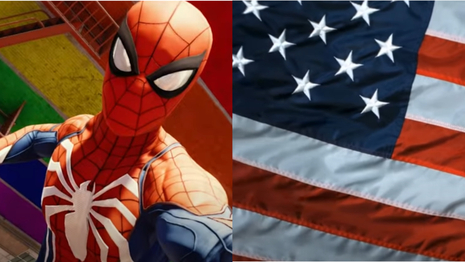 The Post seethed in a story headlined — “‘Spider-Man’ modification scene turns into Pride flag battlefield” — about how the celebration of the newly released PC version of the LGBTQ+-friendly 2018 game “Marvel’s Spider-Man” was being spoiled by “United States flags.” Huh? In The Post’s own words, some gamers tried to thwart any celebration around last week’s release of the PC game “by taking aim at a very specific target: Pride flags.”

A mod refers “to the process of editing or changing the structure, syntax or code of a game,” according to Techopedia.

The newspaper went on to downplay the value of the American flag, whining that the banned gamer circumvented the progressive persona that leftists created for Marvel’s iconic web-slinger. “‘Spider-Man’ already includes a plethora of U.S. flags even without mods, and Spider-Man — given his habit of standing up for the oppressed — has frequently been associated with progressive causes.” How dare someone want more American flags and not LGBTQ+ propaganda!

The Post praised how a mod group, Nexus Mods, banned the patriotic user, but the publication also fretted how copies are already resurfacing on that and other sites:

The original mod was only around for a day, but it amassed hundreds of downloads and numerous comments, many of them homophobic. Nexus Mods, the biggest mod repository on the internet, banned it and the user behind it, but imitators and copies surfaced on Nexus Mods and similar sites like Mod DB, as well as the Internet Archive.

The Post mourned how “one district [in the Spider-Man game] contains a few pieces of Pride iconography, including flags and a mural. These proved popular when the game first came out on PS4, with LGBTQ players praising their inclusion at the time.”

But, praised The Post, the rainbow mafia is fighting back!

Others, meanwhile, uploaded retaliatory mods like ‘The Amazingly Valid Spider-Man,’ which changes Spider-Man’s costume colors to match those of the trans flag and includes a link to support The Trevor Project, a support group for LGBTQ youths.

Conservatives are under attack. Contact The Washington Post at 202-334-6000 and demand it stop pushing the leftist propaganda on gender and sex in video games