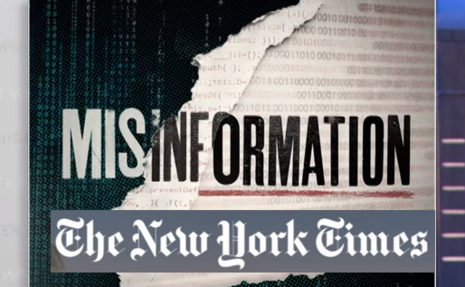 The Times published an article bemoaning stalled efforts to ramp up online censorship.

“The Fight Over Truth Also Has a Red State, Blue State Divide,” wrote liberal Times reporters Steven Lee Myers and Cecilia Kang. These supposed crusaders for “truth” did not mention that the “misinformation” of yesterday often becomes the widely accepted fact of today.

The Times seemingly critiqued constitutional rights. “The biggest hurdle to new regulations — regardless of the party pushing them — is the First Amendment,” The Times absurdly stated. How sad that the right to free speech is getting in the way of authoritarian censorship!

The “scope of the problem of disinformation” has started “to chip away at the notion that free speech is politically untouchable,” The Times squealed. The outlet pontificated that a lot of “misinformation” stems from “the fraudulent assertion that Mr. Trump, and not President Biden, won the 2020 presidential election.”

The Times positively spun Democrats’ efforts to expand unreliable mail-in voting, although The Times itself previously said that mail-in voting was “more likely to be compromised.” Now, though, The Times quoted Brennan Center for Justice’s Sean Morales-Doyle saying, “There is a direct line from conspiracy theories to lawsuits to legislation in states.” The article dismissively mentioned the “foreign business dealings” of Hunter Biden from the familiar “conservatives pounce” angle, noting that Ohio Republican Senate nominee J.D. Vance has mentioned the scandal during his campaign. Media Research Center showed that Big Tech and Big Media stole the 2020 election by censoring the Hunter Biden scandals online.

Furthermore, The Times parroted the Democratic Party talking point that “misinformation” online fuels real-world violence. The article did not even mention the fact that radical leftists have openly incited violence online while pro-free speech individuals like Donald Trump actually did the opposite.

The Times cited pro-censorship Democrat politicians several times in the piece but mentioned two Republicans’ social media messages seemingly as examples of so-called “misinformation.” Leftist narratives, however, were not cited as “misinformation,” while Republican talking points were. The Times seems to have forgotten how several narratives about COVID-19, including around the Wuhan lab leak theory, were originally called “misinformation” and later regarded as credible.

The Times also seemingly endorsed federal censorship, writing, “In the absence of significant action on disinformation at the federal level, officials in state after state are taking aim at the sources of disinformation and the platforms that propagate them.” The Orwellian Disinformation Governance Board and the new White House disinformation task force are two recent pro-censorship effort from the Biden administration.