The liberal media, Big Tech, and the political establishment have teamed up in an unholy alliance to silence conservatives’ concerns that mailing in votes could lead to voter fraud. President Donald Trump was fact-checked by Twitter for condemning “Mail-In Ballots” as “substantially fraudulent” in May. Since then, Big Tech has continued its scorched earth policy against Trump and fellow conservatives for questioning the vulnerabilities of mail-in voting.

Big Tech has a history of cracking down on Trump and his allies for critiquing the vulnerabilities of mail-in voting. This censorious trend arguably began when Trump was fact-checked by Twitter for condemning “Mail-In Ballots,” stating, “There is NO WAY (ZERO!) that Mail-In Ballots will be anything less than substantially fraudulent,” this past May.

GOP Chairwoman Ronna McDaniel called out Twitter for censoring critiques of mail-in voting earlier this year: “Twitter falsely claims there is no evidence of mail-in ballot fraud.” She added: “That’s odd since NJ’s all-mail primary this month was ‘plagued’ by fraud concerns, with 3,000 votes set aside.” She later noted that “Ballots were stolen out of mailboxes.” Included in the tweet was a NBC article headlined “Close Results In Paterson Vote Plagued By Fraud Claims; Over 3K Ballots Seemingly Set Aside.” 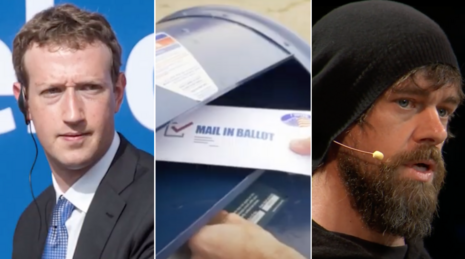 Outlets across the political spectrum have recently announced mail-in voting errors and fraud in multiple states.

New Jersey has been beset by multiple scandals regarding mail-in votes. Washington Examiner reported how 7,000 New Jersey residents received mail-in ballots for the wrong district. In early October, the Department of Justice charged a mail carrier with dumping mail and nearly 100 ballots in New Jersey dumpsters.

Other states have faced mail-in ballot scandals as well. The Examiner posted an article about how Texas mayoral candidate Zul Mirza Mohamed was charged with hundreds of felonies relating to voter fraud, including “25 counts of unlawful possession of a ballot without the request of the voter and 84 counts of fraudulent use of a mail ballot application.” Even The Washington Post added fuel to the fire: “At least 1,400 Virginia voters get duplicate absentee ballots amid rush to meet high demand, officials say,” it wrote in late September.

There have been other articles specifically criticizing the hazards of mail-in voting itself from past election seasons. Here are but a few examples of when liberal outlets called out the dangers of mailing votes in the recent past:

The liberal establishment is so terrified of conservatives making similar critiques during the 2020 election that Big Tech companies like Facebook have overhauled their rules to protect liberals who have pushed for mail-in ballots.

The Biden campaign in particular pressured Facebook by torching its leadership for allowing a video from Donald Trump Jr. expressing concern over mail-in ballot fraud on the platform. Biden specifically condemned the platform for allowing “this dangerous claptrap to be spread to millions of people.” Facebook leadership, shrinking under scrutiny, declared in a Twitter thread that the platform “won’t allow ads with content that seeks to delegitimize the outcome of an election.”

When reached for comment, election law expert and political law attorney in the Washington, D.C. office of Foley & Lardner LLP Cleta Mitchell responded that there is “not a serious legal difference” between absentee voting and general mail-in voting, in that they have the same general vulnerabilities.

Mitchell clarified beyond a shadow of a doubt that “Any time there is voting taking place outside the supervision and assistance of trained election officials, there is opportunity for mischief.”

Big Tech executives know that they can crush conservative dissent about the issues that decide the fate of the election.

Facebook declared that public concern over voter fraud will not be tolerated — which simply means the platform plans to censor Trump and conservatives for voicing concerns about the election that will decide America’s future.

It’s no surprise that Facebook’s policy change happened the same week that the Biden campaign demanded Trump's Facebook posts be censored. The Biden campaign’s letter, obtained by Axios, proclaimed that Donald Trump Jr’s public statements of concern over mail-in voting were dangerous to democracy itself:

“No company that considers itself a force for good in democracy, and that purports to take voter suppression seriously, would allow this dangerous claptrap to be spread to millions of people. Removing this video should have been the easiest of easy calls under your policies, yet it remains up today.”

Twitter also modified its rules, stating: “we may label and reduce the visibility of Tweets containing false or misleading information about civic processes in order to provide additional context” in its Civic integrity policy.

Twitter locked, and later reinstated, the account of former acting Director of National Intelligence Richard Grenell on October 8 after he tweeted a picture of two ballots sent to his friend’s parents — both of whom passed away 10 years ago, according to Breitbart.

Trump wrote an August 23 tweet criticizing “Mail Drop Boxes” as a “voter security disaster.” Twitter responded by placing an interstitial, or filter, over Trump’s tweet. In late May, Twitter fact-checked Trump for suggesting that mail-in ballots could lead to voter fraud, a concern even The Times has acknowledged to be valid.

Trump Campaign’s National Press Secretary Hogan Gidley was censored for daring to voice concerns about mail-in voter fraud as well. “The Trump campaign’s national press secretary had his Twitter account suspended Thursday, just hours before the presidential debate, after he tweeted about his experience of being sent absentee ballot materials intended for someone else,” Fox News detailed in late October. Gidley had reportedly been suspended for tweeting about “receiving an envelope in the mail that was addressed to someone else, by the name of ‘Daniel.’”

Conservatives can recall when the liberal establishment saw mailing votes as hazardous to democracy.

She tweeted that even the liberal media have explained the legitimate reasons for concern about voter fraud. She linked to The Times article headlined “Error and Fraud at Issue as Absentee Voting Rises.”

The record shows, liberal media outlets had no problem with criticizing mail-in voting when it was politically expedient to do so.

The Post has addressed voter fraud, particularly from absentee ballots, multiple times. In 2012, when the chief fraud concern was impostors voting at the polls in place of other people, The Post was clear that other forms of fraud were comparatively far more real:

“It may still be possible to steal an American election, if you know the right way to go about it. Recent court cases, from Appalachia to the Miami suburbs, have revealed the tricks of an underground trade: Conspirators allegedly bought off absentee voters, faked absentee ballots, and bribed people heading to the polls to vote one way or another.”

Another article by The Post that same year suggested similar ideas based on cited research from Carnegie-Knight investigative reporting project’s News21:

MSNBC observed in a 2014 article headlined “Greg Abbott's bogus voter fraud crusade” that, according to “experts,” absentee ballot fraud is of the most popular form of voter fraud:

“Indeed, election experts say absentee ballot fraud is the most common form of organized voter fraud, since, because of the secret ballot, there’s no way to ensure that an in-person voter is voting for the candidate he promised to.”

Most recently, Slate wrote that elections can be swung by mail-in voter fraud in a 2016 piece headlined, “Voter Fraud Exists. Republican Restrictions Won’t Stop It”:

“Voter fraud does happen—but it almost never occurs at the polls. Instead, as election law expert and occasional Slate contributor Rick Hasen has explained, voter fraud occurs through absentee ballots. The vast majority of voter fraud prosecutions touted by conservative groups like [T]he Heritage Foundation involve absentee ballots that were illegally cast. And the only voting fraud schemes with the potential to actually swing elections involved mail-in ballots, not impersonation at the polls. (This makes sense: It’s much easier to forge a signature, impersonate a voter, or buy a vote in the privacy of one’s home than it is in a voting booth at the polls.)”

The same piece noted bluntly: “If Republicans were truly serious about eradicating voter fraud, they would severely restrict absentee voting, permitting it only when voters have a good excuse, like illness.”

Lawyer Cleta Mitchell confirmed not only the parallel vulnerabilities between mail-in votes and absentee ballots but attested to how both can be used in an attempt to steal the 2020 election.

Mitchell warned: “Any time there is voting taking place outside the supervision and assistance of trained election officials, there is opportunity for mischief.”

She also made clear that “The swarming of the election offices with tens of thousands of mail ballots this year, is certain to upend the system which is not prepared to manage all of those pieces of paper.” Mitchell illuminated the fact that the electoral system was woefully unprepared for mass mail-in voting:

“There are lots of opportunities for fraud when ballots or applications are mailed to vacant lots, to dead people, etc., and when partisan campaign operatives are collecting ballots and dumping them into receptacles that no one is observing. That’s just one of many scenarios that is of concern.”

Mitchell suggested that the Democratic political establishment is eagerly pushing for the most cynical methods to win this current election:

“The Democrats have been demanding that ‘ballot harvesting’ be legalized in places where it has been prohibited. Ballot harvesting is where strangers / campaign partisans can collect unlimited ballots and return those on behalf of the voters – big opportunity for fraud in that process.”

Mitchell explained that there is “not a serious legal difference” between absentee voting and general mail-in voting, though they are initially distributed in different ways.

Mitchell made the critical distinction that while citizens had to request absentee ballots in the past, mail-in ballots are now being sent en-masse and overwhelming an unprepared system:

“The voter rolls are so badly maintained, that sending to everyone on the list is a guaranteed way to ultimately be sending ballots to dead people, people who have moved, etc. And once those ballots are sent, there are few safeguards to protect against those ballots being fraudulently voted.”

Having individuals with special cases request absentee ballots is one thing, but sending ballots en-masse has a much larger capacity for fraud, Mitchell warned.

Conservatives are under attack. Contact Twitter’s and Facebook's leadership by tweeting at the official @Twitter account  and contact Facebook headquarters at 1-650-308- 7300 or 1-650-543-4800 and demand that Big Tech companies not permit doxxing on their platforms. If you have been censored, contact us at the Media Research Center contact form to be included in our database, and help us hold Big Tech accountable.