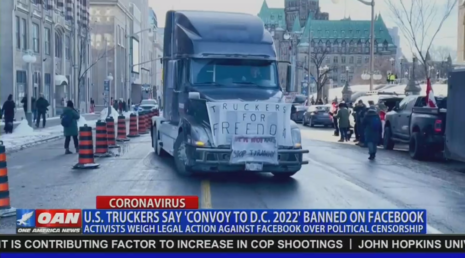 Facebook “VP of AR/VR” (augmented reality/virtual reality) Andrew Bosworth recently called his platform a “fundamentally democratic technology.” Yet, Facebook shut down a grassroots, protest group against governmental tyranny known as “Convoy to DC 2022.” The convoy plans to bring together truckers from across the U.S. to protest COVID-19 mandates, according to Reclaim The Net.

The convoy reportedly plans to begin in California and drive all the way to Washington, D.C. After the Facebook group for the convoy reached about 137,000 members, the Big Tech giant shut down the collective, allegedly for “repeatedly violating our policies around QAnon,” Reclaim The Net reported.

An unverified account purporting to be Brian Brase, one of the organizers of the convoy, tweeted, “Facebook just shut down our page. Apparently we don’t fit their agenda. People United is scary I guess. Convoy is still on.” Reclaim The Net reported that the “QAnon policies” cited by Facebook have been criticized in the past for reflecting a potential “unchecked license” for Facebook to censor.

The convoy’s fundraising GiveSendGo page states, “Mandates have been proven to only hurt people, destroy businesses and peoples lives. We need to stand together to make sure our freedoms are maintained.” The convoy explained, “We are taking our peaceful movement to the doorsteps of the Federal Government and demanding that they cease all mandates against its people.” The page added, “It is imperative that this happens because if we don't, our country will no longer be the country we have come to love.  We are doing this for our future Generations and to regain our lives back.” The page cites the “Freedom Convoy” organized by truckers in Canada at the end of January.

Ironically, Facebook executive Bosworth recently claimed that Facebook was a platform for democracy. “If your democracy can’t tolerate the speech of people, I’m not sure what kind of democracy it is … [Facebook is] a fundamentally democratic technology,” Bosworth reportedly told Axios in December 2021. “I do believe in giving people more access to information.”

In light of Facebook’s history of biased censorship, and its targeting of a democratic movement like the Convoy to DC 2022, Facebook’s “democratic” nature is questionable at best.