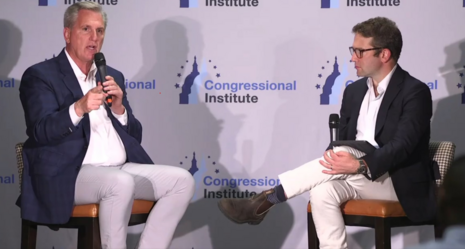 Congress should target monopolies as it advances Big Tech legislation, House Minority Leader Kevin McCarthy (R-CA) said last week. “If ninety percent of your searches go through one search engine, is that a monopoly?” McCarthy asked during an interview on Thursday. “If you’re using a platform, and you’re picking and choosing what somebody can say on it, you shouldn’t have liability protection.”

McCarthy was one of several lawmakers who spoke during the annual House GOP retreat organized by the Congressional Institute in Ponte Vedra Beach, Fla. Responding to a question, McCarthy clarified that those characterizations include Google, Facebook and Twitter.

Bipartisan tech antitrust legislation introduced in October would prevent tech platforms from favoring their own products over those of competitors. But the “Big Four” tech companies – including Google and Facebook – spent over $55 million on lobbying to stave off the enactment of antitrust legislation last year. Another bipartisan antitrust bill aims to promote competition in the app development market. It would require Apple and Google to allow users to download apps from sources other than Apple’s and Google’s in-house app stores.

Pending Section 230 legislation includes the bipartisan Eliminating Abusive and Rampant Neglect of Interactive Technologies (EARN IT) Act of 2022, which would remove tech companies’ legal immunity around content related to alleged child sexual abuse. But skeptics ranging from NSA whistleblower Edward Snowden to the self-styled “center-right” American Action Forum (AAF) think tank have signaled major privacy concerns about the bill. AAF’s opposition is notable because it has supported censorship in the past. The group has also backed a loose approach toward immigration.

Taking an approach different from the EARN IT Act, Rep. Greg Steube’s (R-FL) Curbing Abuse and Saving Expression in Technology (CASE-IT) Act would strip market-dominant Big Tech companies’ unconditional immunity from civil liability, providing legal immunity only if these companies moderate content in line with the First Amendment, the American Principles Project noted in a one-pager.

Before Google became the go-to search engine for internet users, there were many search engines, McCarthy said. House Republicans want a marketplace that encourages people to create alternative platforms that can compete with companies like Google, he added.

Tech executives commonly deny that their programs engage in practices like censorship and discrimination against certain users, even in private conversations, McCarthy said.

McCarthy went on to detail tech CEOs’ dishonesty immediately before they testified to Congress when he was House majority leader.

“And you know what would happen the night before they were to testify?” McCarthy recalled. “They’d put the press release out that said they were sorry, ‘Yeah, that happened.’”

As part of his 11-Point Plan to Rescue America, Scott is proposing that all social media platforms that censor speech will be treated as publishers and subject to legal action. His plan also proposes that platforms receive users’ consent before using their personal information or giving it to a third party.

Conservatives are under attack. Contact your local representative and demand that Big Tech mirror the First Amendment while providing transparency, clarity on “hate speech” and equal footing for conservatives.