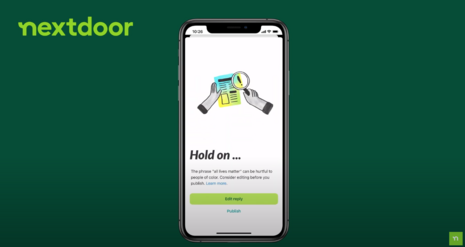 The not-so-neighborly social media app Nextdoor revealed a new program that warns users to avoid posting language that it deemed “could be offensive.”

Phrases such as “All Lives Matter” will trip Nextdoor’s racism censor, apparently. The social media app for people to communicate within their own neighborhoods about local concerns has taken a decisively far-left turn. “Nextdoor has launched the anti-racism notification to prevent language that could be offensive or hurtful to people of all backgrounds,” Nextdoor posted in the description of the video announcement on April 18. “The notification detects potentially racist phrases such as ‘All Lives Matter’ or ‘Blue Lives Matter,’ and prompts the author to consider editing their post or comment before it goes live.”

Nextdoor’s policy change may be a warning of future censorship.

“The anti-racism notification does not prevent a neighbor from publishing, but aims to make people aware of language that may violate our policy against discrimination and the harm that can be caused by the use of these phrases,” Nextdoor clarified in a company blog. “As a reminder, All Lives Matter and Blue Lives Matter content is explicitly prohibited on Nextdoor when used to undermine racial equality or the Black Lives Matter movement.”

“We made this change in light of our ongoing anti-racism work to make Nextdoor a platform where everyone belongs. Since 2015, we have partnered with racial justice experts to ensure that Nextdoor is a welcoming environment for all neighbors,” the blog explained.

Amid the heated debate over election security, Nextdoor sided with woke corporations and announced on April 14 that the platform would stand against election integrity. The platform postulated that it “took an important step in support of protecting voter rights and opposing discriminatory voting measures.” The platform’s announcement explained that it had “joined a coalition of business leaders that are focused on equal and fair voting access for all through various initiatives with the Black Economic Alliance and Business for America, American Civil Liberties Union and the Leadership Conference on Civil and Human Rights.”

Black Economic Alliance — the leftist organization behind a recent corporate attempt to block voter ID laws across the United States —  cheered how “over 500 companies and CEOs have united to oppose the 360+ state bills pending in 47 states that contain discriminatory voting measures.”

The same blog specified: “We are proud to support this movement that connects to our purpose and removes barriers that restrict voting rights for our neighbors in Black and Brown communities.”

Nextdoor has a history of using liberal racial bias as a selling point for the platform. Nextdoor released a chart last year in its “Creating a diverse & inclusive organization” announcement to show how many “Women,” “Black,” and general “Minority/POC” are on its leadership boards.

Conservatism is under attack. Contact Nextdoor headquarters via this link and demand that provide equal footing for conservatives. If you have noticed bias from Nextdoor’s moderation, contact us at the Media Research Center contact form, and help us hold Big Tech accountable.