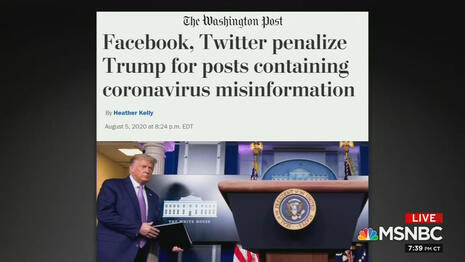 Both Twitter and Facebook acted quickly Wednesday night to remove a video of President Trump speaking on Fox News about the coronavirus’ effects on children. The social media sites said the content violated their policies on COVID-19 misinformation.

On Wednesday morning, President Trump called into Fox & Friends and said “schools should open” because children are “almost” or “virtually” immune to the coronavirus. A clip of the segment was later posted to President Trump's personal Facebook page and to @TeamTrump, the official Twitter account for the Trump campaign, which the president retweeted from his personal account @realDonaldTrump.

According to The Washington Post, the tweet was hidden from view and @TeamTrump will not be allowed to tweet again until it deletes the offending tweet. The Post originally reported that it was the President's account they had taken action against, but it was quickly refuted by Twitter spokesman Nick Pacilio, who previously worked for Senator Kamala Harris (D-CA). Talk about a revolving door with former Harris staffer telling the public what is and isn't disinformation.

Facebook and Twitter need to stop this crap! They should both be investigated for election interference. To censor the President during an election year, no matter what he says, is leftist election manipulation. Orwell would be proud.

For more context, here’s what Trump said in full during the Fox & Friends clip, as reported by Variety:

“My view is the schools should open. This thing’s going away. It will go away like things go away. And my view is that schools should be open. If you look at children, children are almost — and I would almost say, definitely — but almost immune from this disease. So few, they’ve got stronger, hard to believe, I don’t know how you feel about it, but they have much stronger immune systems than we do somehow for this… They don’t have a problem. They just don’t have a problem… They are virtually immune from this problem.”

The Trump campaign defended the President’s comments and the video.

“The President was stating a fact that children are less susceptible to the coronavirus. Another day, another display of Silicon Valley’s flagrant bias against this President, where the rules are only enforced in one direction," Courtney Parella, deputy national press secretary for Trump's reelection campaign, said in a statement to USA Today. "Social media companies are not the arbiters of truth.”

And yet the Big Tech companies have taken it upon themselves to arbitrate the truth during this heated election season and it's clear which side they're on. Just a few weeks ago, Facebook censored a Trump post about mail-in voting and Twitter likely won't censor a deceptively edited Joe Biden ad.