Love Wins. At NYC's Pride Parade, So Does Violence.

Love is love. Unless you happened to be an elderly hot dog vendor near Washington Square Park during New York City's Pride Parade on June 27. A female attendee accused the vendor of using a slur, which of course warranted a severe beatdown by her hand. Violence is justified whenever it comes to mean words apparently. The man sought a getaway as a group chased him. He was pulled away and tended to by police and others after falling onto the street. 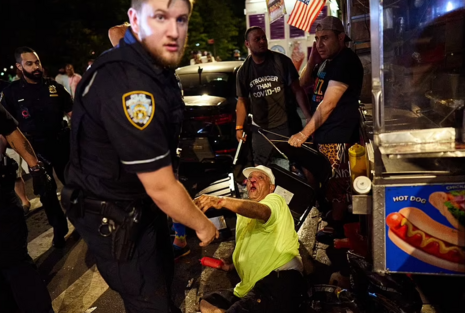 This was just one instance of clashes between Prides, the public, and the police. The eventful weekend resulted in at least seven arrests as crowds gathered and remained in Washington Square Park. According to ABC7NY, “one woman in her 20s allegedly bit an officer, another woman in her 20s threw a water bottle at an officer, and a man was arrested for assaulting a police officer.” Tensions between NYPD officers and the Love crowd were high and exacerbated by the police barricades implemented around Greenwich Village park. Pepper Spray was employed to control the unruly crowds.

The anti-police sentiment was clearly prevalent, as confrontations continued throughout the evening. Dailymail reported that NYC Pride banned uniform police from official events until 2025, “over fears their presence would ‘harm’ attendees.” The events surrounding George Floyd’s murder last year are what prompted the decision. “The Queer Liberation March, which replaced the traditional Gay Pride March this year, explicitly banned gay police officers from joining the event, and asked that no police be present for the march itself, claiming that the New York Police Department is a racist and homophobic institution.” Pride officials were willing to sacrifice collective safety and place attendees at risk all for the purpose of political correctness. The move backfired, as riot police were inevitably deployed to the perimeters of the park scene to maintain order.

One Twitter user commented, ‘The NYPD has attacked the Queer Liberation March, used pepper spray, and arrested at least one person. Now they’re out in force, and riot gear, threatening more arrests. This is why it’s no cops at Pride.” Evidently, the crowd should be allowed to wreak havoc . Any motion to keep matters in order is now somehow a form of brutality on the part of the police.

"Love is love... until its not anymore."