Paramount+ is releasing new Rugrats reboot this month and its gonna be gay! Yeah baby! 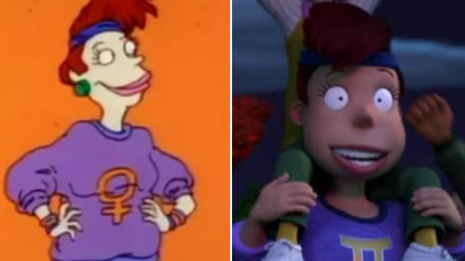 Your children are sure to appreciate this very inclusive update to the Rugrats lore. Unfortunately, we’re not being blessed with a gay baby. No, it's actually Phil and Lil’s mom Betty who is receiving a sexuality update. As pop culture outlet The AV Club says, Betty “has low-key always been a queer icon.” For those who did not see this coming “let’s be real: Betty was gay as f**k - and now that's actually canon.”

This is a momentous occasion for the collective culture, as Betty is the first openly gay woman in the Rugrats series. The original series portrayed Betty as an independent and gutsy business woman married to the very passive and quiet Howard. He is being kicked out of the picture this time around for the Paramount+ reboot. Whether or not this new Rugrats rendition will explore new potential gay love interests for Betty is yet to be seen. For the sake of the children, let's hope not.

Gay Betty will be voiced by actor Natalie Morales, whose main claim to fame is the fact that she happens to be bisexual and also played a small role on the TV Series “Parks and Recreation.” Nothing less should be expected. Morales expressed her excitement at voicing Betty and told The AV Club that “Anyone who watched the original show may have had an inkling Betty was a member of the alphabet mafia.” Being that the show’s main audience has historically been small children not yet familiar with sexual deviancy, Betty’s persuasion was most likely not even considered. Back in the day, Betty’s character only mattered in so much as she furthered the larger plot relating to the Rugrats gang and their childish antics.

Morales celebrates this new instance of LGBTQ propaganda. “Betty is a single mom with her own business who has twins and still has time to hang out with her friends and her community, and I think it’s just so great because examples of living your life happily and healthily as an out queer person is just such a beacon for young queer people who may not have examples of that,” she says.

For Morales, we should not downplay the importance and influence of inflicting a gay woman on the Rugrats. Morales explains that had there been a gay cartoon for her growing up, she might have had an easier go of it. “And yeah, Betty is a fictional cartoon, but even cartoons were hugely influential for me as a kid and if I’d been watching Rugrats and seen Betty casually talking about her ex-girlfriend, I think at least a part of me would have felt like things might be okay in the future.”

Even Betty’s classic “female” symbol sweater is being changed for a Gemini top. Is nothing sacred?

Boycott Paramount+. Call or email Paramount using this link and demand that Betty is returned to her former heterosexuality: https://help.paramountplus.com/s/help