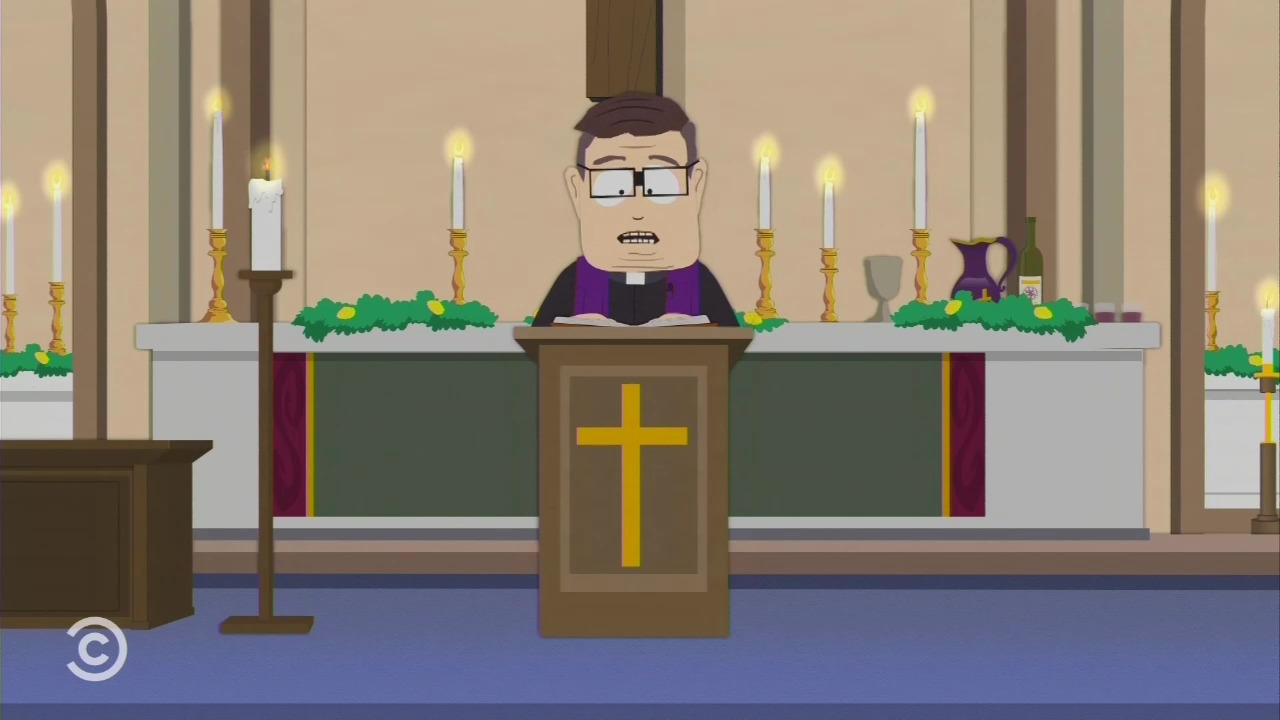 The Catholic Church was the target for South Park on the second episode of the Comedy Central show’s 22nd season titled “A Boy and a Priest” which aired on October 3. The show’s angle was to mock them mercilessly with priest pedophilia jokes.

It was just another example of television mocking religion and distorting its message to push an agenda. If the show was really just concerned about pedophilia, perhaps they could have tackled the rarely-talked about issue of it in public schools. After all, a report from The Daily Caller in 2011 stated that children in New York City were 10 times more likely to be sexually abused by a teacher than a priest.

The South Park episode starts with the Marsh family going to church and during mass, Randy Marsh and other town citizens will not stop cracking Catholic priest and pedophilia jokes, irking their priest, Father Maxi, while he is trying to give his sermon. Eight-year-old Butters reaches out to the priest for guidance, knowing what it's like to be an outcast and made fun of. When the priest decides he's had enough and does not want to perform mass the next week and instead hangs out with Butters, people in the town get worried and call the Denver Archdiocese. The Archbishop assumes that the priest ran away ("Oh, not another one!") because he was sexually abusing children, so a “clean-up crew” is sent to town in an attempt to cover up for him with bleach and other cleaning materials to destroy any evidence of his wrongdoing (this being South Park, there are a lot of crude gags about cleaning up semen).

After Father Maxi’s appearance at Clyde’s birthday party with Butters is not well-received by the other children, he decides he does not belong anywhere--and the show uses his frustration to attack the Church yet again.

Butters: But it's not your fault.

Priest: Because I knew! All right?! I knew. Years ago, when bad things started coming out about the Catholic Church, I went to Vatican, and I -- I found out that the problem was worse than anyone even thought. I thought I could help fix it, so I kept my mouth shut. I thought there was a cancer in the Church that we could get rid of. But the Church is the cancer. It's not about a few bad apples. There's only a few good apples, and I'm clearly not one of them.

Ultimately, the men from the Archdiocese try to lure the South Park priest to the woods by kidnapping three children (Stan, Butters and Clyde) and tying them up in their underwear around a campfire. Father Maxi does not come to abuse the children, however; he comes to save them and expects to die for it.

The Archbishop, still assuming he's a pedophile, says, “You think we searched all over town and set up this trap to kill you? We're Catholics. We're here to give you what you deserve: A full transfer to the beautiful Maldive Islands! Luxury airfare and beach house included! The Church took care of everything, just like it always has from the beginning....And don't worry -- there'll be plenty of priests to take your place here.”

With that, Father Maxi decides he must stay in South Park to protect everyone and ends up running over the members of the Archdiocese.

Overall, the show sends the wrong message to viewers; it tries to paint it as if the overwhelming majority of priests are pedophiles when that is simply not the case. The majority of them are men who have made sacrifices in their lives--including the opportunity for a potential marriage--in order to devote their lives to serving God. It is a massive sacrifice and one many would not be willing to take in order to serve their community.

Even so, the men who do so such receive virtually no respect in media. They are simply laughed at and demonized because of a few terrible people who abused their position while everyone else tries to make a positive impact on the world.

Mocking religion is nothing new for South Park. It’s happened to Muslims. It’s happened to Mormons. It’s happened to Jews and, of course, Catholics. It’s clear the show is willing to do or say nearly anything in order to score a laugh but sometimes, it can include needlessly mocking a faith with over one billion observers--just for the sake of making crass pedophilia jokes at their expense.