During a November 17 Senate Homeland Security Hearing, Senator Rick Scott (R-Fla.) called out Federal FBI director Christopher Wray for the FBI’s blatant bias against investigating attacks on pro-life groups. Wray claimed that the FBI is not biased in its investigations but rather that the media misconstrues what the FBI is and isn’t focused on. 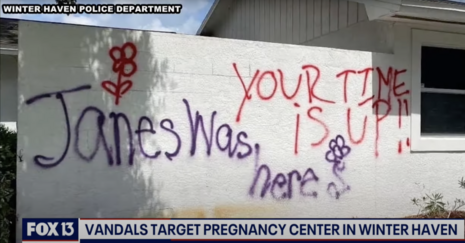 Scott pointed out that the Bureau seems to be playing for one team and not the other:

So the there appears to be investigations and arrests of pro-life, the pro-life community. And, you know, it's just the opposite of what's happened. We've had numerous fire bombings, violent attacks, acts of vandalism against churches, pro-life organizations and crisis pregnancy centers.

Then he asked Wray if these attacks are or are not happening.

Wray responded by first admitting that 70% of the violence that erupted following Roe’s reversal this summer was violent attacks on pro-life groups and said the FBI is focused on investigating those crimes.

Now, we have quite a number of investigations as we speak into attacks or threats against pregnancy resource centers, faith based organizations and other pro-life organizations. And you might be interested to know that since the Dobbs Act decision, probably in the neighborhood of 70% of our abortion related violence cases or threats cases are cases of violence or threats against pro-life. So where the victims are are pro-life organizations, and we're going after that through our joint terrorism task forces, through our criminal authorities, face act and things like that. We have about 20 field offices involved in this. And so we take it very seriously. And again, I don't care whether you're motivated by pro-life use or pro-choice views, you don't get to use violence to express it.

Is that really so? It seems like, as Scott pointed out, quite the opposite is happening.

A study from the Crime Prevention Research Center (CPRC) confirmed that there have been 135 attacks against pro-life groups from May-September 2022 and only six on pro-abortion groups. Based on that number, there are 22 times as many attacks on pro-life groups than pro-abort groups.

“It just seems to me that in DOJ, FBI, in particular, they they might be doing the right thing, but they you guys allow information to be to go out that not talk about what you're doing," Scott said. "Because if you listen, if you read the press, you would think that you guys are only going after pro-life groups and not going after groups that attack pro-life.”

Yup. You got that right mister.

As a matter of fact, The Daily Signal reported back in October that the FBI refused to share whether or not it has made any arrests related to attacks on pro-life centers, groups or churches following the Dobbs draft leak. At the same time, we’ve seen the FBI raid homes of pro-life individuals.

Still, Wray was in denial.

Senator, I think we don't have the time for me to tell you how frustrated I sometimes get by some of the news reporting about our work and the misreporting about our work. The circumspection that we display with regard to discussing our investigations is based on rules and practices that are important to people having confidence in the integrity of our work and go back decades in multiple administrations.

Wray admitted to the fact that 70 percent of attacks post-Roe are on pro-life groups but hasn’t done a thing about it and then blamed the media for only showing the FBI’s investigations of pro-life groups. Director, if you are investigating pro-abortion violence, let the public know. Or keep doing what you're doing and complain that the public doesn't trust the FBI.