When I was in high school, I couldn’t even decide how long to cook pasta. Now, if a school board in California has its way, high schoolers will be allowed to abort their kids, take hormonal birth control and even receive gender-affirming “care” all during the eight-hour school day. 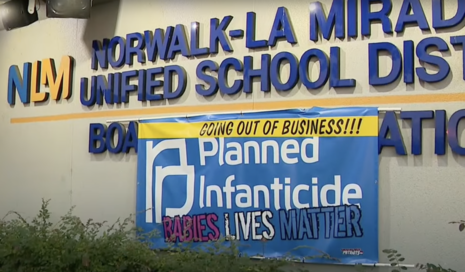 A school board in southern California is considering adding a Planned Parenthood clinic to John Glenn HIGH SCHOOL, according to Fox News. A backlash ensued, and the board postponed the decision … for now.

Following the overturn of Roe v. Wade back in June, blue states and blue leaning legislatures have been pushing for more pro-abortion laws. California in particular, under the direction of Democratic Governor Gavin Newsom, allows abortion through all nine months of pregnancy so it’s no surprise that the state was about to allow a Planned Parenthood clinic on a literal high school campus.

The school board site listed the proposal that the board planned to discuss Monday. The clinic supposedly would serve nine purposes, including: the insertion and distribution of hormonal birth control, “laboratory services related to reproductive health” (that couldn’t be any more vague), and what they called “walk-in services,” which opens the door to practically anything they want to do. Though the proposal doesn’t mention abortion or gender-affirming hormone therapy specifically, it does clarify that referrals to other Planned Parenthood centers would be provided “for services not offered” at the school.

Other Planned Parenthood clinics do provide gender-affirming hormone therapy, so there is a very real possibility students will be referred off-campus to receive this treatment -– again, with zero parental notification. To add insult to injury, there is no way for parents to EVER obtain this information, as the contract asserts that all medical records are to be maintained by Planned Parenthood.

Ryan Heath, attorney and founder of The Gavel Project, went on Fox News Tuesday to explain the intentions of the on-campus clinic.

A lot of people are very up in arms about the abortion issue but I actually wanted to come out and explain to people that this is about trying to create transgender conversion camps on high school campuses where kids are most susceptible to peer pressure.

The clinic agreement also mentioned that California law does not require parental consent to receive “reproductive health services.” So, 15 year old kids can come in to kill their own kids without parental consent or start taking medicine to “transition” but aren’t even old enough to obtain a drivers license.

In 2019, Los Angeles County Planned Parenthood chapter said it was opening 50 new high school clinics to provide “health care services, education, parent resources, and support” to students. This is just one more attempt to do that.

Heath also mentioned an interesting point about how CA school systems will find money to fund Planned Parenthood clinics but not funnel it into the actual needs of the school.

We can’t figure out for some reason here in this state, or really anywhere why it is that we cant solve these active shooter problems, we can’t solve the on campus violence problems for kids, but for some reason we can find extra funds to put in these Planned Parenthood facilities at school campuses.

As a result of the idiotic proposal, parents and protesters visited the school board building in opposition of the clinic placement. This protest led to the board's eventual decision to postpone the discussion, hopefully indefinitely, but judging by Cali’s tract record, I doubt it.