Just when we thought the value of life was on the rise, an anti-life judge in Florida just halted Desantis’ life saving ban on abortions after 15-weeks. 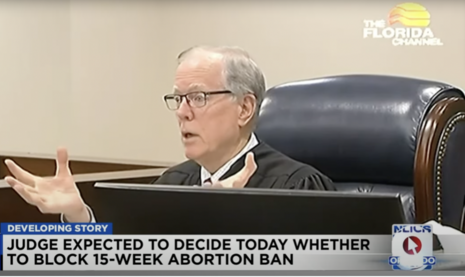 Following the overturn of Roe v. Wade, many states implemented abortion bans to help stop the slaughter of the unborn. Florida passed a ban on abortions after 15-weeks to come into effect July 1. One day prior, Leon County Circuit Judge John C. Cooper temporarily blocked the ban.

Cooper decided to issue an “emergency” statewide injunction halting Gov. Ron DeSantis's (R-FL)’s ban on Thursday. He deemed the ban “unconstitutional” and claimed it “violates the privacy provision of the Florida Constitution.” The injunction will come into order when Cooper signs it in the near future.

Florida Voice For The Unborn Founder and Executive Director Andrew Shirvell posted a press release regarding Cooper’s injunction and spoke to the MRC in an exclusive interview.

Shirvell said that during the hearing Thursday, Cooper displayed an overwhelming amount of hostility and historically exudes a “liberal philosophy.”

In the press release, Shirvell testified, “I personally observed the demeanor of Judge Cooper, who was overwhelmingly biased in favor of the pro-abortion plaintiffs.”

“Judge Cooper’s ruling today will lead to the unjust deaths of countless preborn babies in Florida. The blood of these innocent children is squarely on the hands of Judge Cooper” Shirvell wrote.

DeSantis's 15-week ban may be temporarily blocked, but when it is enacted, it isn’t enough. According to Shirvell, the 15-week ban will only save about 4% of babies from potential abortion. 96% of Florida’s abortions happen before the 15-week mark, Shirvell told the MRC.

Shirvell explained that even “saving even one life is tremendous” and advocated for "more stringent abortion bans" to protect the unborn in FL and hopefully across the nation.

“The struggle for life is not over,” DeSantis added in his statement.

“The abortion rate will continue to rise” if abortion bans are not in place, Shirvell told the MRC.

Kentucky acted in lockstep with Cooper. The ACLU tweeted that “A Kentucky Circuit Court has blocked the state’s total abortion ban and six-week ban, granting our request for a restraining order. Abortion is once again legal in the commonwealth.”