The only thing I’ve learned throughout the Amber Heard and Johnny Depp defamation trial is that Hollywood is chock full of idiots. 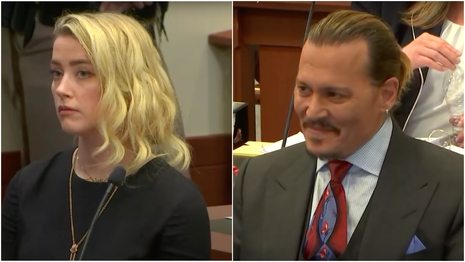 Pirates of The Caribbean star, Depp is suing his ex-wife, Aquaman actress, Heard, for libel for $50 million over a December 2018 op-ed for The Washington Post. Heard is counter suing for $100 million and described herself as “a public figure representing domestic abuse.” With nearly six weeks of back and forth, no real progress was made but the one thing that did grow is my understanding of how screwed up Hollywood is.

In the trial, both Heard and Depp name dragged other celebrities to help their case. We dove into the backstory of some of these other Hollywood celebs and were not shocked at the level of loony that we found.

Richards is one of Depp’s long time friends and he’s a Rolling Stones guitarist. Other than that, Richards was a drug addict, fell asleep driving with his kid in the back seat and snorted his fathers ashes.

Love was selected to testify as one of Depp’s supporters. She’s a troubled rock star with a drug addiction. She once punched a colleague in the face, she’s verbally abused a flight attendant, she was arrested for throwing a microphone stand into the crowd at one of her performances, injuring an audience member and Love was sued for allegedly ordering the murder of her former son-in-law to regain her late husband’s guitar. Nutjob.

Moss is a former lover of Depp’s and has reportedly had an aggressive partying lifestyle. Moss has been in and out of rehab, celebrated the christening of her daughter with two days of drinking and was a notorious cocaine snorter. But nonetheless, Depp chose her to help his case. LOL.

Barkin and Depp had previous romantic involvement. She claimed that Depp abused her and she previously had animosity toward police officers. In 2012 she lashed out irrationally when a police officer kindly asked her to step up on a curb instead of standing on the road. Drama queen.

Perry is the Aerosmith lead guitarist and a friend of Depp’s. He reportedly had rampant drug use. Supposedly he would hire a roadie on his musical tours to “dispense cocaine through a straw whenever he wandered over.” Seems like a resourceful man!

All of those celebrities got to have their sex lives and romantic relationships brought up in the Depp v. Heard trial. If I were dating someone as dramatic as Heard, I’d want to forget about it but thanks to the defamation trial, it doesn’t look like these guys will be getting away with hiding their dirty laundry.

At first I felt bad that these celebrities got stuck in the crossfire during this trial but after looking at who they are and their past, I couldn’t care less.

All in all, Hollyweird is full of a bunch of nutcases. The court just announced the verdict that Depp won the defamation lawsuit, so maybe the name drop of all these celebs did actually serve a purpose.