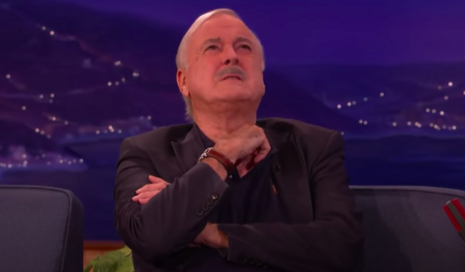 Twitter has become more entertaining than reality television as of late. Today’s episode: Winnie the Pooh narrator shows he’s not putting up with any cancel culture in the Hundred Acre Twitter Woods.

Last night, after hearing the ridiculous apology (again) from a The Simpsons cast member, John Cleese visited Twitter to mock Hank Azaria’s plea for forgiveness. Cleese is most commonly known from “Monty Python” and as the narrator for “Winnie the Pooh” so his acting skills were no surprise.

On Monday, Azaria, who was the former voice of Indian character Apu on The Simpsons, admitted that he felt compelled to apologize to “every single Indian person.” As a result, Cleese started his night on Twitter by sarcastically apologizing for “any distress” that his own show “Monty Python” might have caused. In the Tweet, he pretended to show a weakness towards cancel culture which has been one of the common antics of Tinseltown patrons who are scared of the woke mob.

Not wishing to be left behind by Hank Azaria, I would like to apologise on behalf on Monty Python for all the many sketches we did making fun of white English people

We're sorry for any distress we may have caused

After his initial tweet, and given his name, many SJW’s found it necessary to input their thoughts, feelings, and opinions online (but honestly, when do they not?). Luckily, Cleese had no problem mocking the dumb apologies people feel compelled to make (ex: Indian voice actor Hank Azaria, hiding country star Morgan Wallen, or Mumford’s lost son Winston Marshall).

Cleese is a funny guy. Some of his best comebacks included:

Actually all jokes are unnecessary

But a few people get pleasure from them, although only if they have a sense of humour https://t.co/IEWrXic8oE

They don't have enough on their plate anyway https://t.co/XCWt29qoyK

That makes you all oppressors https://t.co/ubtgRvSTh0

This isn’t the first time Cleese has spoken out about cancel culture. He previously stood with J.K. Rowling when the Twitter "Twits" went after her. And last July, Cleese dove into conversation with Reuters to talk about the wokies. He said that cancel culture “misunderstands the main purposes of life which is to have fun.” Look at what happened with Azaria and Apu! The Simpsons is a comedy and is set to make people laugh. There shouldn’t be a culture and society war when a character is intended to entertain and nothing else.

In the same conversation last summer, Cleese said, “Everything humorous is critical. If you have someone who is perfectly kind and intelligent and flexible and who always behaves appropriately, they’re not funny.” And he also named BBC “cowardly and gutless” when they took town an episode of “Fawlty Towers” for some politically incorrect nonsense. Bowing down to cancel culture is a common trend among other Hollywood cowards.

Cleese is one of the few in the industry who actually sees how dumb people make themselves look when give in to the woke mob. The apology letters and kiss-ass attitude is getting more annoying by the second. Kudos to Cleese!