Uh oh. Pepsi fans may have an advantage amidst the ongoing Pepsi vs. Coke feud as Coca-Cola faces backlash for encouraging employees to “Try to be less white.”

A training video created by Robin DiAngelo for a LinkedIn Learning seminar circulated the internet over the weekend. Supposedly, Coca-Cola employees watched the lecture which had slides about confronting racism, trying to break white solidarity, and being overall “less white.”

The slides were tweeted by Karlyn Borysenko who is an organizational psychologist and anti-critical race theory activist. She posted four slides that she received from an internal whistleblower who is Latino and, later, Borysenko posted a YouTube video walk-through of said slides.

Borsyenko's video showed an additional slide to her tweeted images that explained the need for continual practices on anti-race training. It advocated for “Monthly affinity groups," “ongoing professional development” and even “revamped interview questions that address racial issues.”

Another slide said, “In the U.S. and other Western nations, white people are socialized to feel that they are inherently superior because they are white.”

The next slide implied that white people are oppressive, arrogant, ignorant, and lacked apathy. In and of itself, that slide, and the entire lecture, is racist. 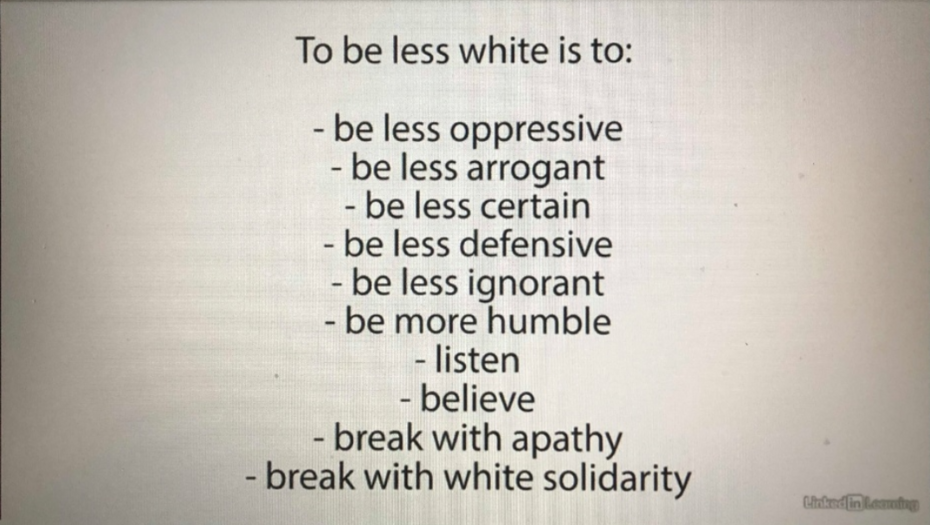 The last slide that Borsysenko shared literally said, “Try to be less white.”

Conservative twitter was quick to point out the hypocrisy and possible illegality of the presentation.

If a corporate company sent around a training kit instructing black people how to “be less black”, the world would implode and lawsuits would follow.

I genuinely hope these employees sue @CocaCola for blatant racism and discrimination. https://t.co/07OPZouEcV

Republican Party official Harmeet K. Dhillon first tweeted, “Wut.... this seems like blatant racial discrimination to this employment lawyer” in response to Borsyenko’s slide images. Then, less than half an hour later she tweeted this:

Simple test: Imagine if a company told a subset of its workers: "Be less black!" "Be less Latino!" "Be less Asian!" -- trial lawyers would be beating a path to the courthouse to file suit. White workers are people too, with legal rights, feelings, and lawyers.... https://t.co/08fKYjg0km

While Coca-Cola did not post the video themselves, they do utilize these LinkedIn Learning resources. After the scandal broke, they put out a statement addressing the issue:

Our Better Together global training is part of a learning plan to help build an inclusive workplace. It is comprised of a number of short vignettes, each a few minutes long. The training includes access to the LinkedIn Learning platform on a variety of topics, including on diversity, equity and inclusion. The video in question was accessible on the LinkedIn Learning platform but was not part of the company’s curriculum. We will continue to listen to our employees and refine our learning programs as appropriate.

Coca-Cola’s denied adding the “try to be less white” training to the curriculum but did say they allowed employee access to it. They also said they would listen to their employees and “refine our learning programs as appropriate” which is essentially their confession that they messed up.

Despite Coca-Cola denying that the lecture was required, it was removed shortly after the scandal erupted. Fishy …

It’s ironic that the cancel culture-loving mainstream media as well as most left-wing outlets have steered clear of the issue. If, however, the training encouraged employees to “Try to be less black,” I don’t think they would be so quiet.