Out Magazine: LGBTQ Community Goes OFF on Miley Cyrus for Being a 'TERF'

Miley Cyrus is in trouble with the left-wing nuts yet again. Back in 2019 she claimed that “being gay is a choice,” which was clearly the wrong thing to say. Now she's back with comments on her preferences for genitalia that are being labeled "transphobia." 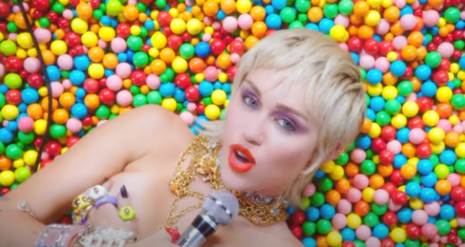 Her recent “tits are prettier than balls” explanation for "what ended up making female relationships make more sense" to her on Sirius XM’s Barstool Radio has left the far lefties demanding an explanation. This is entertaining: The LGBTQ community going off on one of their own. Where’s the popcorn?

Writer Mey Rude for Out Magazine, a LGBTQ news, fashion, entertainment and lifestyle magazine, was quick to blast Miley on her “TERF talking points.”

TERF is a derogatory term used by trans activists to describe a “trans-exclusionary radical feminist.” Now that Miley, an out bisexual, stated that men’s bodies have “dicks” and “balls,” she’s a TERF, too.

“This kind of gender essentialism was left behind by most of the queer community years ago. Genitals do not equal gender, and Miley should know this,” Rude said. Ironic name for coverage on the left, by the way.

In an age where TERFS are more vocal than they’ve ever been, comments like these reinforce some very dangerous ideas about bodies and gender. Having a gender preference, or even genitalia preference, in who you sleep with is obviously not a problem, but to reduce dicks and balls to "men’s bodies" contributes to dangerous beliefs about trans women.

That’s the joy of being a part of Tinseltown. People look to get offended by nothing.

Rude later states her continued love for Miley despite her current criticism. “I don’t think Miley meant to traffic in TERF talking points, but the fact is that she did — and she should know better. The stakes are too high for someone with as big of a spotlight as her to be accidentally spreading this sort of rhetoric.”

Rude points out that Miley is just no longer left-wing enough for the liberals. Because “women” can have male genitalia, too, and a sexual preference is transphobic. Leftist like Rude like to look for the most far fetched commentary possible and run with it, as this tweet from @boomieleaks pretty much sums up.

This isn’t a defense for Miley. She certainly has room for growth. For example: licking a penis shaped birthday cake or selling a hoodie that reads "I Love My Pussy.” But a note should be made that lefties want to overstep even more. Miley may need to roll out the wrecking ball again and say, “It’s my mouth, I can say what I want to.”