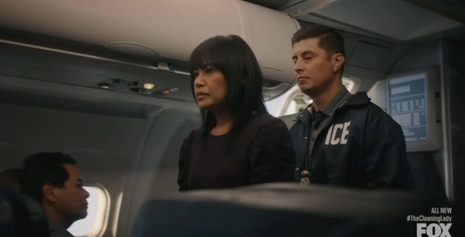 Since the beginning, season two carried on with the same old themes from the first season -- that is, illegal immigrants living in the United States can do no wrong, even if they commit crimes, because there's always a justifiable reason.

Fiona, who is also living in the country illegally, expresses fear of getting deported or her family getting deporting for merley for taking Luca to the emergency room:

Fiona: Luca has a fever of 104, and he's been vomiting. We're here at Nevada General. We just got here. I didn't know what else to do.

Thony: You did the right thing. I'll be right there.

Thony: Luca's at the hospital. I have to go.

Chris: I'll park the van. We'll come in with you.

Fiona: No, okay? I can't take that risk with you if anything happens.

Fiona: No, okay? He's at work. It'll take too long for him to get here. Luca needs to go now.

Jaz: Then I'll wait with you. No, Jaz. [ Indistinct conversation ]

Fiona: If I get deported, Child Services will take you away from me. Look, I need you to both listen to me. Take the van and go to JD's. Wait for him to come home. Please. Then I know you're both safe. My purse, please.

Fiona refuses to let her teenagers go into the hospital with her, despite this being a myth. But why let facts get in the way of a good drama?

Once she’s in the hospital, she’s reassured by a hospital worker that Luca will get the life-saving care he needs despite not having health insurance or a social security number, because they are living in a quote "sanctuary city."

Apparently, the writers of the show didn't realize that under federal law hospitals are required to provide life sustaining treatment to anyone who shows up to an emergency room, including illegal immigrants:

Fiona: My nephew has a high fever and he started throwing up about an hour ago.

Hospital Receptionist: Has he been to this hospital before?

Hospital Receptionist: Does he have prior medical conditions?

Fiona: Yes. His -- his whole life. Fill that out, bring it back when you're done.

Hospital Receptionist: We'll need his date of birth, home address, and his Social.

Hospital Worker: You can leave that part blank.

Hospital Worker: The Social Security section. You don't have to put one down if you don't have one. Some people just make up a number. My mom was ‘tago Ng tago’. She didn't have a number either. [ Speaking Tagalog ]

Hospital Worker: Medical repatriation happen, but not here. This is a sanctuary city. At this hospital, we don't care where you're from, just that you're here now. Everyone's entitled to emergency care, regardless of your status.

The hospital scene intensifies as the doctor determines that the only option for Luca is another liver transplant, which would require them to wait for a donor.

Thony, who has a medical degree, isn't satisfied with the doctor's medical opinion, as they are running out of time to keep Luca alive.

She ends up bringing a non-FDA approved drug to the hospital to try on Luca, as she believes it's their only hope. Her and Fiona end up taking hospital equipment with out permission to administer the drug themselves.

While Luca experienced a dramatic improvement health wise, his doctor still reported them to authorities for taking equipment and using the drug without approval from the hospital.

Luca is placed in foster care, while the two women are handed off to law enforcement.

Thony is able to wriggle her way out of this one because she’s working with the FBI as an informant. But Fiona isn’t so lucky, as she’s brought into custody and later handed off to Immigration and Customs Enforcement (ICE) and eventually deported to her home country.

This is an odd plot twist considering ‘sanctuary city’ policies actually ban local police officers from alerting immigration enforcement after the arrest or release of an illegal immigrant: "Back and forth scenes between FBI agent Garrett Miller’s funeral and Fiona being handed off to ICE for deportation."

So far there's no word on when season three will be out or if there will even be one. But the ending is quite a cliffhanger, with the storyline teasing that if there is a season three, Thony could end up even more entangled with one of the criminal organizations, as it appears she's determined to try to smuggle her sister-in-law back into the country while assisting with another drug shipment.