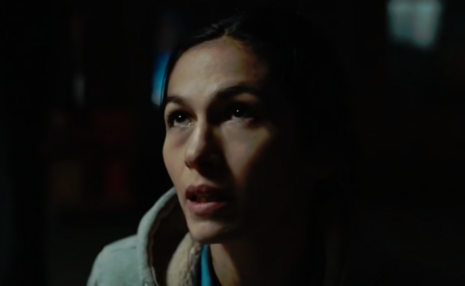 Instead of going through the legal process of getting her visa extended, which Thony tells a hospital receptionist is in the works, she ends up staying in the states working as a cleaning lady. And despite having a medical degree, this is the only job she could work without the proper documentation.

When De La Rosa tries to get her son into gene therapy, the receptionist tells her she won’t give her an appointment because there is a risk that they will be deported before the 52-week trial period is over - a reasonable fear, since they will be spending money and therapy on a boy who might not be able to finish the necessary 52 weeks.

Receptionist: “So I spoke to Dr. Ramtej at UCLA, and he sent me your Visa for a bone marrow transplant. It's expired.”

Thony De La Rosa: “Well, we--the donor backed out, and we've been waiting for another match since then.”

Receptionist: “Did you get your Visa extended?”

Receptionist: “So that's a no? I'm afraid we can't help you.”

Thony De La Rosa: “Ma'am, please. My son needs this gene therapy, or he won't make it. Will you really turn away five-year-old boy? What if it was your son?”

Receptionist: “I'm sorry, but anyone who can't comply with all protocols is ineligible.”

Thony De La Rosa: “Well, if you read again that paperwork, you'll see that I'm a doctor in one of the busiest medical centers in Manila. -Of course, we'll comply.

Receptionist: “You're an illegal. We can't risk your son being deported before the 52-week trial period is over. Now if you will excuse me. Institute of Stem Cell Medicine. How can I help you? Yes, what's your name?"

After witnessing a murder, Thony begins working for mobster Arman Morales (Adan Canto) cleaning up crime scenes in order to avoid police detection - you know, something that is actually illegal and will get her deported faster.

According to U.S Immigration and Customs Enforcement (ICE), in fiscal year 2020, 92% of those deported “had criminal convictions or pending criminal charges.”

Working as a cleaning lady for a famous mobster is definitely going to help her keep a low profile and not get deported. The show also indicates that she can't go to the police after witnessing the aforementioned murder at risk of getting deported, which is also not true as an illegal immigrant can procure a U Visa, thus negating the fear of deportation.

But, we can't expect Hollywood writers to do research for projects in which they're trying to make political points.