Katy Perry did more than just sing about kissing a girl and liking it.

At its L.A. gala this weekend, the Human Rights Campaign awarded Katy Perry the Ally for Equality award for her LGBT advocacy. In her acceptance speech, the pop star spent ten minutes criticizing her Christian upbringing while championing “sexual fluidity.” And, predictably, the feminist media loved it.

“I’m just a singer/songwriter honestly,” she continued. “I speak my truths and I paint my fantasies into these little bite sized pop songs, for instance ‘I Kissed a Girl and I Liked It.’”

Perry elaborated on her hit song released nine years ago.

“Truth be told, A. I did more than that,” the singer explained of her lyrics. “B. How was I going to reconcile that with the gospel-singing girl raised in youth groups that were pro-conversion camps?” 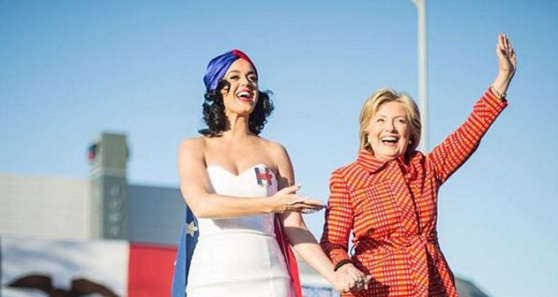 “What I did know,” she proceeded, “was that I was curious and even then I knew sexuality wasn’t as black and white as this dress… But in 2008, when that song came out, I knew that I started a conversation and a lot of the world seemed curious enough to sing along too.”

As 2016’s second highest-paid female artist with 61.9 million Instagram followers, Perry wields influence. She not only starts conversations, but shapes the minds of impressionable youth, much like the church she rejected.

After denigrating the “felt boards” and lessons of morality that she had been taught as a child, Perry explained how singing acquainted her to a new inclusive community.

“My gift introduced me to people outside my bubble, and my bubble started to burst. These people were nothing like I had been taught to fear.”

“These days I get an incomparable high from finally knowing myself,” Perry admitted.

Teen Vogue’s digital entertainment editor Ella Ceron encouraged readers to watch the singer’s “powerful” speech. “It will hopefully inspire you to live your ‘best, most authentic’ life, too,” Ceron wrote.

Fellow celebrity activists Lena Dunham and America Ferrera showed support for Perry’s speech with a post-gala kiss on the lips. As a nod to the singer’s aforementioned hit song, Ferrera captured the moment on Instagram with the caption: “…and I liked it.”

Although many of Perry’s pals attended the award ceremony to support her, the pop star’s parents probably weren’t invited. After all, when Perry was asked to sing at President Barack Obama’s January 2013 inauguration, she banned the two from attending.

This election season, Perry was one of Hillary Clinton's most avid supporters, donating to her campaign, speaking at fundraisers and promoting the candidate on social media.