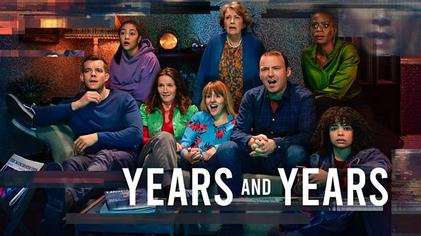 BBC One’s limited series Years and Years tells the story of the Lyons family living in the United Kingdom between 2019 and 2034. Episode 1, which premiered in the United States on HBO on June 24, quickly shows us that President Trump will be reelected in 2020, but ends with the vision of Trump having just fired nuclear missiles at China.

In the final days of Trump's second term in office, a territory dispute with China and the United States comes to a head. Even then, it’s chalked up to “America going nuts… their elections get madder and madder.” British politician Vivienne Rook (Emma Thompson) considers the matter an “emergency,” though, and warns “we've got four days left of this presidency, four days in which he can do anything he likes.”

Then the family, gathered for their grandmother's birthday, get the news that Trump launched a nuclear attack on China.

Muriel: Are you all right, darling?

Stephen: Where are you?

Edith: Uh, Vietnam. On the coast, just... down from Ho Chi Minh City.

Rosie: Oh, all right for some.

Edith: We came here to protest, but too late. It's... It's only just over there, Hong Sha Dao.

Muriel: Is that on that island thing?

Edith: For God's sake, Gran. Don't you watch the news? I send you a link every day. Hong Sha Dao is an artificial island. It's built by the Chinese. Population: 26,000. But it's more than that. It's a military base with nuclear weapons, that's what America says.

Stephen: It was on the radio this morning. Why? What's happened?

Edith: Is that siren with you, or us?

Stephen: What does it mean?

Edith: Uh, America. They fired... a nuclear missile at Hong Sha. He did it. Donald Trump did it,in his final days of office.

Newscaster: This is a broadcast on behalf of His Majesty's government. It has been announced by the prime minister that the United Kingdom of Great Britain and Northern Ireland has been placed on an official war footing as of 17:15 this afternoon.

The episode ends with the family collectively freaking out, Daniel Lyons (Russell Tovey) leaving his husband Ralph (Dino Fetscher) and the rest of his family to go have sex with another man, and angry refugees pummeling an effigy of Trump and the Chinese leader.

Building up to this, we learn more about the Lyons family and our changing world in the not too distant future. As we’ve seen on television before, Daniel dismisses the idea of having children, not because he’s gay, but because the world is supposedly too horrible a place for children. “Don’t know if I could have a kid in a world like this,” he says in 2019. Little does he know the worst is yet to come.

In addition to his refusal to be a parent, Daniel is also there to remind viewers that refugees are “not immigrants… there’s a difference.” Speaking about Ukrainians who have been purged by the Russians, he explains to a woman who voted for Brexit and doesn't understand why Britain's helping people that “these people are refugees, which means they're allowed to seek asylum, and it's got nothing to do with Europe. And we're still part of the United Nations whether you like it or not.”

There’s also Stephen Lyons (Rory Kinnear) the eldest Lyons sibling, and his wife, Celeste Bisme-Lyons (T’Nia Miller). Stephen and Celeste, after searching their daughter’s Internet history, think that younger daughter Ruby (Jade Alleyne) is "transsexual," a move they are all ready and willing to support. But that’d be far too predictable. Instead, Ruby declares herself to be “transhuman.” She says, "I'm not comfortable with my body, so, I want to get rid of it," which involves becoming “digital.” She explains her brain will be “download[ed]... into the cloud… [her] body recycled, into the earth,” with Ruby wanting to “live forever, as information… not male or female: better.”

In a example of how explicit sex education courses have become, their other daughter, Bethany (Lydia West), at thirteen, takes a “sexual awareness imaging control” class which is “compulsory” and they joke around about being "taught pornography" from age eleven.

As outlandish as Episode 1 was, the show only looks to get more ridiculous, with future episodes dealing with "President Pence."