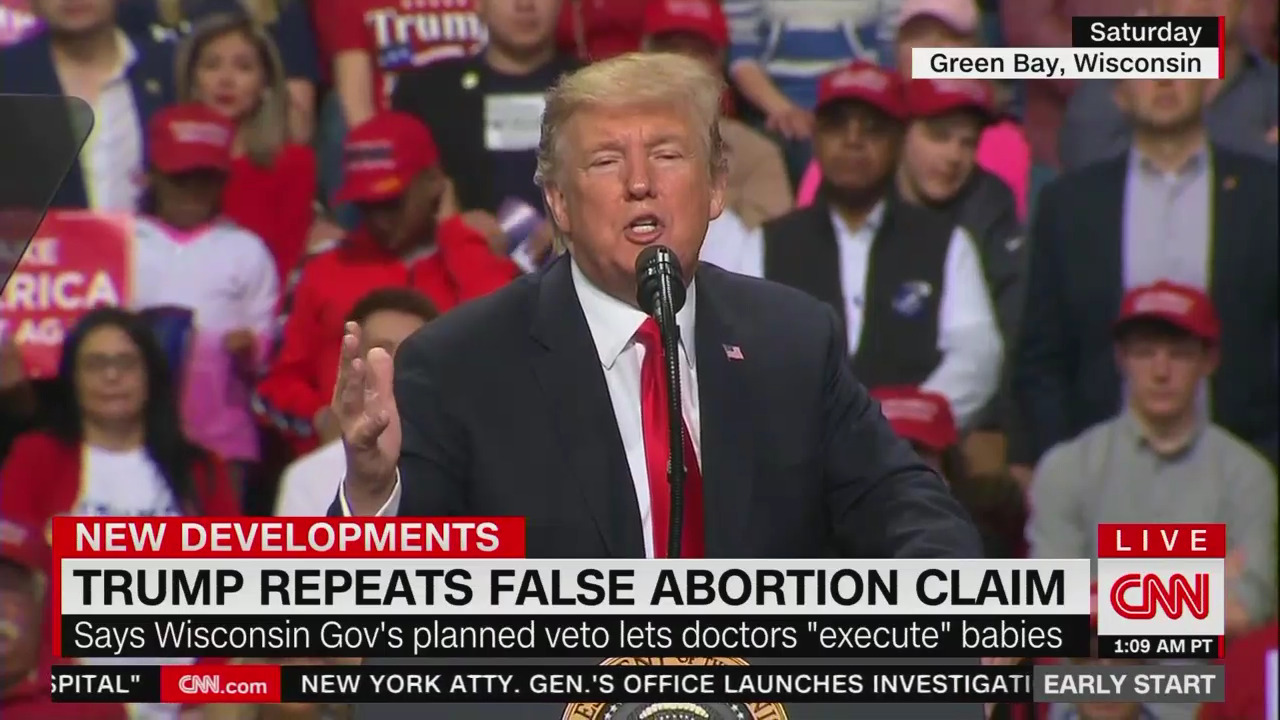 Over the weekend, President Trump held a rally in Wisconsin, where he criticized Democratic Governor Tony Evers for saying he’d veto a bill requiring doctors provide medical care to babies born alive from an abortion. The media predictably pounced.

“The baby is born. The mother meets with the doctor. They take care of the baby. They wrap the baby beautifully, and then the doctor and the mother determine whether or not they will execute the baby,” Trump said. As Matt Philbin pointed out, “Trump simply restated Virginia Governor Ralph Northam’s explanation of a born-alive abortion.”

One example of media lunacy is Abby Vesoulis’ April 29 article “Trump Keeps Talking About Second-Trimester Abortions. Here's What He Gets Wrong” for TIME magazine where she repeatedly calls Trump's remarks "misleading." To support her side, Vesoulis quotes abortionist Dr. Kristyn Brandi who says, “To be clear, there is never a scenario where a baby is delivered and we decide to execute the baby." Except we know that's exactly what infamous newborn serial killer Dr. Kermit Gosnell did.

Vesoulis makes the argument most mainstream media do on late-term abortions, trying to excuse these abortions since they’re “extremely rare” and “mostly happen because of a serious fetal anomaly or for the health of the woman.”

Furthermore, Vesoulis’ framework is off. Her headline specifies second-trimester abortions, but she talks about abortions after 21 weeks, which is in the middle of the second-trimester. Since 91.1 percent of abortions occurred in the first trimester in 2015, that means 8.9 percent are performed in the second trimester or later, equating to 56,797 abortions a year, which doesn’t seem so rare. For abortions performed after 21 weeks, that's 1.3 percent, or 8,296 abortions - again, more than implied. There is no evidence that late-term abortions are largely performed for fetal anomaly or maternal health, in fact, studies and research from the Guttmacher Institute indicate they're mostly done on healthy women pregnant with healthy babies.

Vesoulis links to a study from 1985 to claim that “Very few abortions are considered unsuccessful.” That’s over thirty years ago. While Vesoulis acknowledges “it’s so difficult to find updated statistics,” she credits it to procedures being “safer and even more effective.” Late-term abortion is far more dangerous for a woman than giving birth or having an earlier abortion. It has even killed women, so who, then, is it safe for?

By citing the 1985 study, it would seem that Vesoulis didn’t look far. The CDC, which she already cherry picked in her article, reports that there were 143 live births from abortion between 2003-2014. Considering that states aren’t even required to report "successful abortions," and California doesn't report abortion statistics at all, there are likely more we don’t know about.

And it’s not just the CDC. There are Congressional findings of babies surviving abortions and testimonies from medical professionals. Abortion survivors have also shared their stories.

Vesoulis likely saw Trump’s statements as a way to criticize him and pro-lifers for their opposition to late-term abortions, but instead just comes off looking like an uninformed pro-abortion activist, and worse, excusing infanticide.