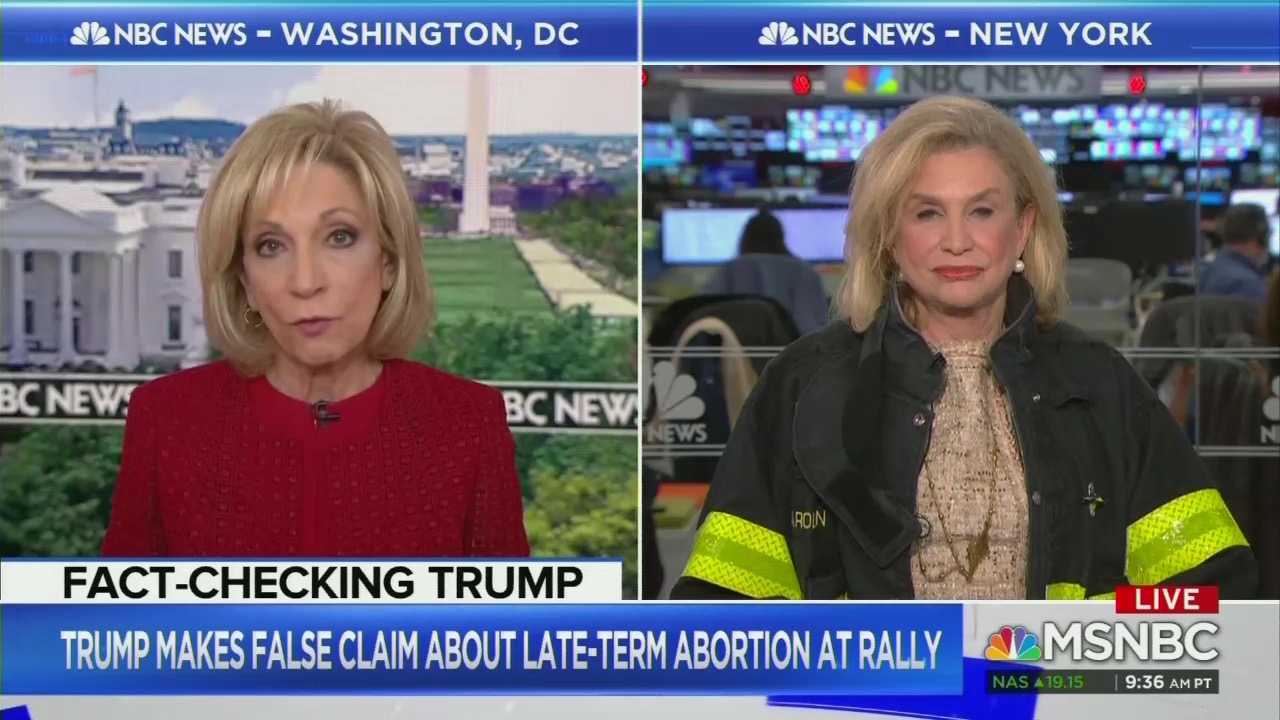 MSNBC pushed hard for the extreme practice of late term abortion Monday, after serving up the same radical agenda just two weeks ago. On Andrea Mitchell Reports the host fretted to pro-abortion Democrat and Congresswoman Carolyn Maloney over President Trump’s “false claims” about Democrats wanting to let babies who survived abortions, die. Mitchell even quoted a pro-abortion activist group condemning Trump, showcasing that no balance of opinions would be allowed in the segment.

Mitchell began by playing Trump’s comments at a rally this weekend, talking about Wisconsin’s governor, Democrat Tony Evers’ plan to veto a Republican bill in that state that would protect babies born through a botched abortion, from being allowed to die anyway. The “born alive” bill is similar to many other ones across the country that Democrats (and the media) are trying desperately to demonize and ultimately stop from becoming law.

In part of Trump’s comments he claimed that Democrats would allow babies who survived abortions to be “executed”:

The baby is born, the mother meets with the doctor. They take care of the baby. They wrap the baby beautifully and then the doctor and the mother determine whether or not they will execute the baby.

Trump was describing what Virginia Democrat Governor Ralph Northam said in January would happen to a baby who survived an abortion, under Democrat laws. Northam’s comments were defended by the media. Regardless, MSNBC tried now to have it both ways and claim otherwise.

Mitchell went on to quote the openly pro-abortion lobbying group, the American College of Obstetricians and Gynecologists, expressing outrage over President Trump denigrating their “abortion care” as “grossly misleading and inappropriate.” Mitchell did not let viewers know that this group of medical professionals is also a liberal activist group committed to preserving and enacting pro-abortion legislation, so they are not a neutral source on the topic.

Mitchell then invited Maloney to weigh in.

“This is absolutely outrageous rhetoric on the part of the President. It's totally false as the professionals are saying. It's inappropriate and wrong. Fake news,” Maloney gushed.

Mitchell also slammed Trump for trying to impose a gag order on medical organizations that receive federal funds from referring patients to get abortions. Maloney actually called abortion a “constitutional right” saying it was “wrong” of the “extreme right” to not let doctors let babies who miraculously survive abortions die on the operating table:

Well it's a constitutional right to have choice. And the extreme right is trying to chip away in courts and legislation and every way they can, a woman's right to choose. It's outrageous, it's wrong...So they keep trying to take steps that are extreme to criminalize it or whatever which is totally unsound medically. It's not true, false and really catering with untrue rhetoric to an extreme right group in America.