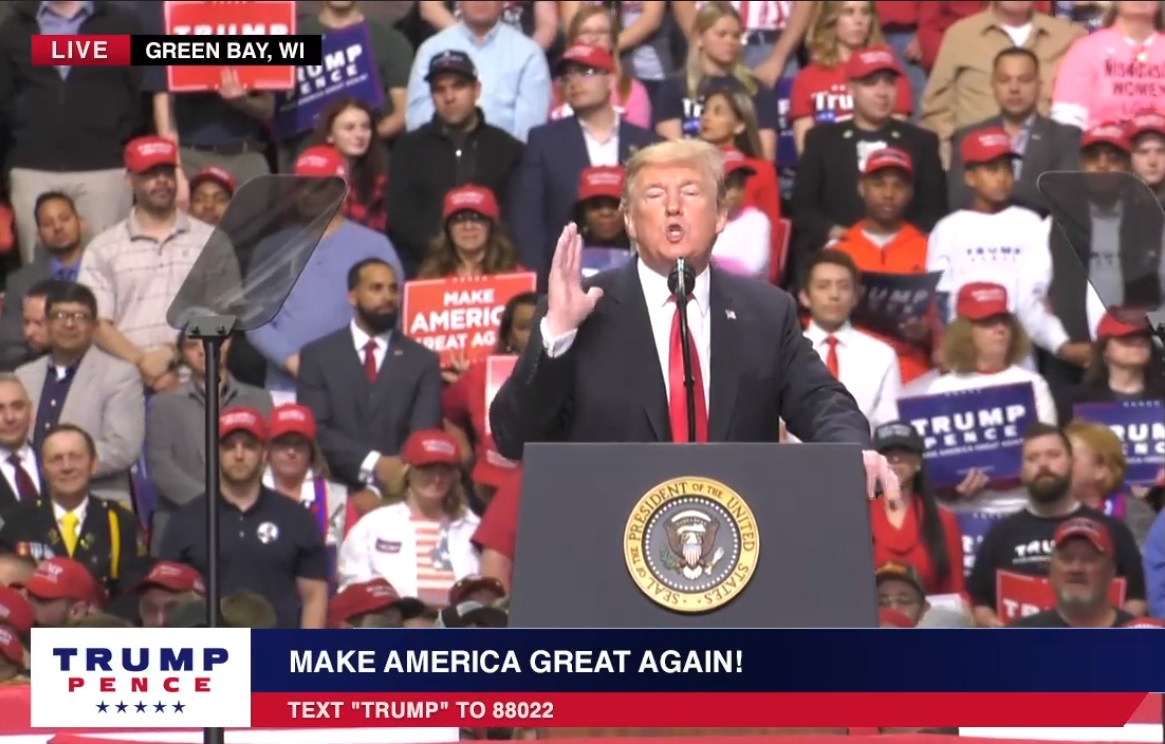 Do you “Easter Worshippers” ever get the feeling there’s a single left-wing PR shop out there writing talking points for Democrats and, I dunno, every liberal media outlet? I mean, you expect lefties to get huffy when you repeat their actual positions back to them in plain English, as President Trump did that to them about abortion at an April 27 Green Bay, Wis. rally. But what are the chances of it being called “an incendiary turn” (MSNBC) or an “incendiary statement” (The New York Times) or an “incendiary falsehood” (CNN) or one of Trump’s “incendiary smears (Vox)?”

The baby is born. The mother meets with the doctor. They take care of the baby. They wrap the baby beautifully, and then the doctor and the mother determine whether or not they will execute the baby.

The media went into panic-reaction mode. There was hue and cry, sound and fury, bubble and squeak. But when the smoke cleared from all those pushed-to-the-limit Fact-Checker 3000s™, journos were left to sputter “incendiary,” quibble over semantics and stress that, because it happens infrequently, murdering newborns isn’t really, ya know, murdering newborns. What they didn’t do is prove Trump’s statement false.

At ThinkProgress, Adrienne Mahsa Varkiani wrote, “Of course, none of this is actually true. Trump’s rhetoric — and his support of the bill he criticized Evers for vetoing — assumes that babies really are regularly born alive after abortions, and the patient and doctor together decide to execute them. Neither is reality.”

No. Trump’s rhetoric says nothing about how common the procedure is. Nor did Northam’s explanation. If Varkiani wants to argue about the word “execute,” let’s do it. A helpless infant lies on a table and someone injects him with drugs to end his life. Change it to a man strapped helplessly to a table in a prison. Someone injects him with drugs that end his life. It’s called execution and nobody disputes that terminology (but when it happens to murderers, it upsets nice liberals like Varkiani.)

CNN’s Eli Watkins took a slightly different tack. “Trump's claim that mothers and doctors are permitted to execute a baby after it leaves the womb is incorrect,” Eli Watkins wrote. “The bill he referred to would mandate that health professionals do all they could to keep a baby alive if it was ‘born alive’ and would penalize anyone who let a baby die.”

Trump’s used it before. Back in February, according to the New York Times’s Chris Cameron, Trump responded to the blocking of a federal measure similar to the Wisconsin bill by tweeting that Democrats “don’t mind executing babies AFTER birth.”

The New York Times has previously fact-checked these claims, finding that late-term abortions are rare. In Wisconsin, only 1 percent of all abortions in 2017 occurred after 20 weeks of pregnancy, according to the most recent annual report from the state’s Department of Health Services. The numbers are similarly low at the national level.

In another fact check, The Times found that infants are rarely born alive after abortion procedures.

Again, the rarity of the procedure doesn’t make Trump a liar. And morally, it matters not at all. Even if it did, it’s hard to gainsay any peremptory effort to keep after-birth executions rare. After all, some of us are old enough to remember when Democrats thought “rare” belonged with “safe,” and “legal.” Today, that formulation might be incendiary.