Viewers who tuned in for The Big Bang Theory’s October 25 episode “The Imitation Perturbation" were treated to more than the story arc of the week, namely the feuds surrounding couples impersonating each other for Halloween. Those who watched until the very last second may have noticed a very political "vanity card" for Chuck Lorre’s Productions that blasted President Trump as "a fascist, hate-filled, fear-mongering, demagogic, truth-shattering, autocratic golf cheater."

Placed between the finals credits and Warner Bros. logo, the vanity card remained on screen for under three seconds. 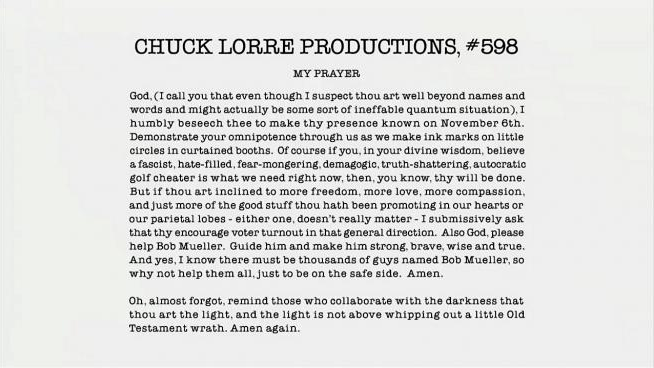 If you can't read the screenshot, it says:

God, (I call you that even though I suspect thou art well beyond names and words and might actually be some sort of ineffable quantum situation), I humbly beseech thee to make thy presence known on November 6th. Demonstrate your omnipotence through us as we make ink marks on little circles in curtained booths. Of course if you, in your divine wisdom, believe a fascist, hate-filled, fear-mongering, demagogic, truth-shattering, autocratic golf cheater is what we need right now, then, you know, thy will be done. But if thou art inclined to more freedom, more love, more compassion, and just more of the good stuff thou hath been promoting in our hearts or our parietal lobes - either one, doesn’t really matter - I submissively ask that thy encourage voter turnout in that general direction. Also God, please help Bob Mueller. Guide him and make him strong, brave, wise and true. And yes, I know there must be thousands of guys named Bob Mueller, so why not help them all, just to be on the safe side. Amen.

Oh, almost forgot, remind those who collaborate with the darkness that thou art the light, and the light is not above whipping out a little Old Testament wrath. Amen again.

It is listed on the Chuck Lorre Productions website, along with all his other show vanity cards.

Lorre is the creator of The Big Bang Theory and its spin-off prequel Young Sheldon. Both shows feature atheist and anti-religious commentary from Sheldon Cooper (Jim Parsons), making it in a way ironic that Lorre would call upon God.

The vanity card does not mention Donald Trump by name, though it leaves nothing to the imagination that he is the “fascist, hate-filled, fear-mongering, demagogic, truth-shattering, autocratic golf cheater” Lorre is referring to. It also suggests that Trump cannot be one who promotes “more freedom, more love, more compassion, and just more of the good stuff…”

October 25 was not the first time Lorre used the show to spout off against Trump in the vanity cards, although not by name. In vanity card #541 from November 3, 2016, Lorre mocked the “Make America Great Again” slogan as “a bumper sticker for victimhood” and said “Big Daddy can't save us. Our salvation lies within ourselves,” adding more irony to how in the more recent vanity card, he would call upon God.

Lorre’s vanity card #559 from May 4, 2017 mocked The Apprentice’s ratings, as if television ratings had anything to do with foreign policy achievements. “Defeat terrorism and crazy dictators? He couldn’t even defeat Two and a Half Men,” the vanity card read, appearing alongside a chart of that week’s ratings.

There was also vanity card #551 from February 9, 2017, a mock executive order, which claimed Trump regards the truth as “what I say it is, or need it to be,” and also mentioned “mean tweet[s]” and “fake news.”

Lorre has long had a penchant for going after Republicans and their policies, in ranting and bizarre manners. Back in 2012, 5 days before the presidential election, he pointed viewers to an uncensored vanity card on his website where he went off about guns and gay marriage and called Mitt Romney "a guy who doesn’t drink, doesn’t smoke, keeps his money offshore, stubs his toe and says 'H-E-double hockey sticks' and wears magical underwear."

Trump and his likeness have appeared elsewhere in television. On October 28, Doctor Who featured a capitalist villain, who, just like the president, is a businessman, although his hotel is blamed for mutating spiders.

Other shows are not so thinly veiled with their criticism of Trump. Referring to the president and his hotel chain by name, as well as veiled references to Melania Trump, Murphy Brown has likewise focuses on Trump as a liar and as an obsessive tweeter. Such are not exactly original complaints.

Trump will not be on the ballot this election, and won’t be again until 2020, should he run for re-election. That does not stop Lorre from using the upcoming mid-terms (less than two weeks away from the airing of this vanity card) to mock the president, and evoking God to do so. The card appeared just minutes before Young Sheldon’s titular character once again voiced his disdain for religion, this time as an “extremely efficient form of crowd control,” and one which has used “fear” as “a recruiting tactic… for centuries.”

Sitcoms such as Lorre’s are not the only ones going after the president. Television news coverage from June 1 to September 30 on the Trump administration was 92 percent negative, according to a study released in early October by the Media Research Center.