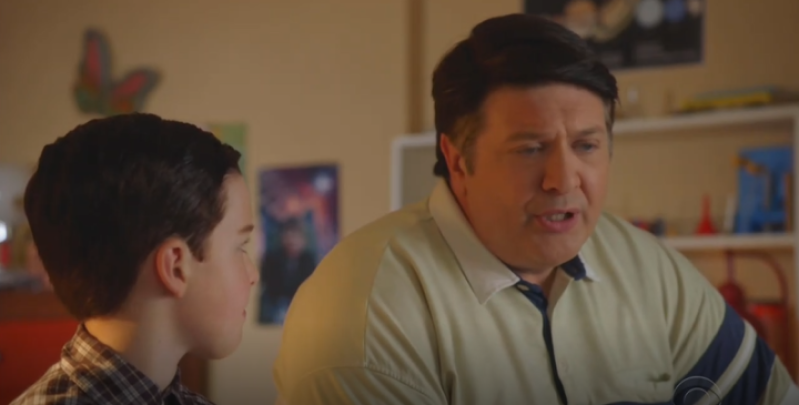 Fathers are often portrayed on television as being dolts, bumbling idiots, and an annoyance to their wives and children. In the case of CBS's Young Sheldon, George Sr. has even more reasons to annoy his young son, with Sheldon being as intelligent as he is, and the father-son duo often not understanding each other. But, on Monday night, viewers were treated to a rare heart-to-heart moment where Sheldon was actually able to learn an important life lesson from his working-class father.

In the season 2 premiere, "A High-Pitched Buzz and Training Wheels," Sheldon has to take on a paper delivery route in order to pay George Sr. back for taking apart and breaking the refrigerator. Braving early mornings and the elements doesn't leave Sheldon in a very good mood, and he begins to take it out on his family members, friends, and classmates. This culminates in an outburst during dinner when he yells at the family for their idle chit-chat after his long day.

George Sr. purposefully acts to have a teachable moment with his son, by-passing Sheldon's Meemaw who wants to talk to him, and his wife, Mary, who thinks he "should calm down first." He decides not to punish his son, even though Sheldon acknowledges he "deserve[s] it." Rather, he shares with him about his own difficult day at work and explains how to handle it like a man.

George Sr.: So I get what you're going through. But you'll notice, I didn't come home and take it out on you...  I want you to get back in there, apologize to everyone, and finish your dinner.

Adult Sheldon voice over: My father's wisdom touched me deeply.

It's not about book smarts or intelligence, when it comes to a lesson about how to treat people. It's a humbling moment for Sheldon, showing even the child prodigy can learn something from his father.

On TV, fathers are often there to be the brunt of a joke, while women are the triumphant parent and partner. NBC's new sitcom I Feel Bad serves as one of the most recent and striking examples - the main character refers to her husband as "Humpty" because of how incapable he is. So when a father is actually shown to command respect and be a role model I think it's worth celebrating.