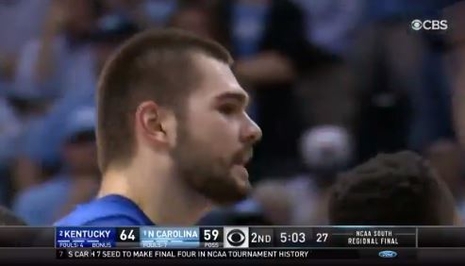 Okay, it’s not the Lakers or the Celtics, but it’s still super-exciting for CNN-types who care about this sort of thing. “As he begins to discuss his sexuality, Isaac Humphries says he is able to lift 25 years of weight off his shoulders,” the CNN.com piece begins.

It was either Mark Twain or HL Mencken that observed nothing good ever comes from an article that starts with the words, “As he begins to discuss his sexuality.” But CNN forges on bravely to tell Humphries’ story.

Humphries did play elite NCAA  ball for the Kentucky Wildcats but went undrafted by the NBA. He played in Europe before moving to Australia. Now he’s ready for the next giant step in his career: “The Big Gay Tell-All”™.

“Forever, I thought that being a professional basketball player and gay were mutually exclusive and that I had to hide that side of my life and wasn’t allowed to be who I truly am,” Humphries exclusively tells CNN Sport’s Amanda Davies.

“Exclusively.” What a scoop Amanda! Her therapy session/interview tells of Humphries’s “‘very dark’ and ‘very lonely’ place” before he decided to alert the media about what gets his freak on.

After all, “‘[t]he environment is very masculine,’ says Humphries. ‘It’s not as progressive as the rest of the world. It’s a little bit back in time in those locker rooms. It is talked about quite negatively, the idea of being gay.’”

Now, however, “his Melbourne United team is ‘so accepting’ and that he feels ‘honored and privileged’ to play basketball” with them.

“‘I have a weight lifted off my shoulders, 25 years of weight,”’ says Humphries.

And a global news network was there to help with the lift. This is CNN.