Strange to say about a sport full of knee-grabbing, roll-on-the ground agony fakers, but there’s a soccer player in France who refuses to flop, even when accused of the dreaded homophobia. 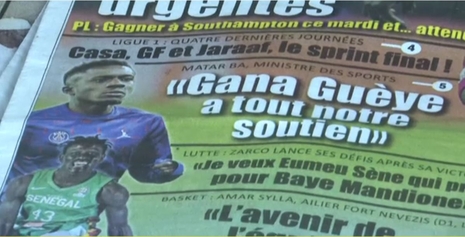 Fox reports that Idrissa Gueye, a Senegalese midfielder for Paris Saint-Germain, recently sat out a game for what coach called “personal reasons. However, the Inquisition, er, the AP suspected he did it to avoid wearing the rainbow-themed jersey the team sported that night.

The team wore the special jerseys as part of an “operation to raise awareness of the fight against discrimination,” in the words of council president Patrick Anton. The team was left to signal its virtue sans Gueye.

In the wake of Gueye’s refusal Anton delivered the French soccer version of “Bake the cake, bigot:”:

Either these suppositions are baseless, in which case we ask you to express yourself without delay in order to stop these rumors. We invite you, for example, to accompany your message with a photo of you wearing the jersey in question. Or these rumors (reports) are true. In which case, we ask you to take stock of the impact of your actions and the very serious mistake committed.

Nice career ya got here. Shame if something were to happen to it.

So far, the athlete hasn’t humiliated himself, even if he may be in the wrong sport. To their credit, some high-profile countrymen defended Gueye. According to Fox:

Mbaye said Gueye “is not homophobic. He does not want his image to be used to promote homosexuality. Leave him alone.”

Sorry Mr. Prime Minister, Gueye has a yellow card. If he doesn’t bust out the rainbow sackcloth, red may be on its way.